A dominant performance by Husqvarna Factory Racing’s Zach Osborne at Round 4 of the Pro Motocross Championship propelled him to his third overall 450 Class victory of the season.

The opening 450 Class moto saw Zach Osborne launch out of the gate to take the holeshot just ahead of Twisted Tea Suzuki’s Max Anstie and JGR/Yoshimura/Suzuki Factory Racing’s Freddie Noren. Kawasaki’s Adam Cianciarulo wasted no time moving towards the front as he passed both Noren and Anstie to take over second, however, a mistake would force him to lose several positions and remount outside of the top-10. At the completion of the opening lap it was Osborne followed by KTM Factory Racing’s Marvin Musquin and GEICO Honda’s Christian Craig.

The top three asserted themselves at the front of the pack, while Team Honda HRC rookie Chase Sexton gave pursuit. Sexton closed in on his teammate Craig near the halfway point of the 30-minute-plus-two-lap moto and eventually made the move into third. Osborne continued a strong pace up front with Musquin trailing by just a couple of seconds.

Osborne withstood Musquin’s late race charge to capture his third moto win of the season by 1.9 seconds over the Frenchman who finished runner-up. Sexton finished third, earning his second podium since moving up to the 450 Class. 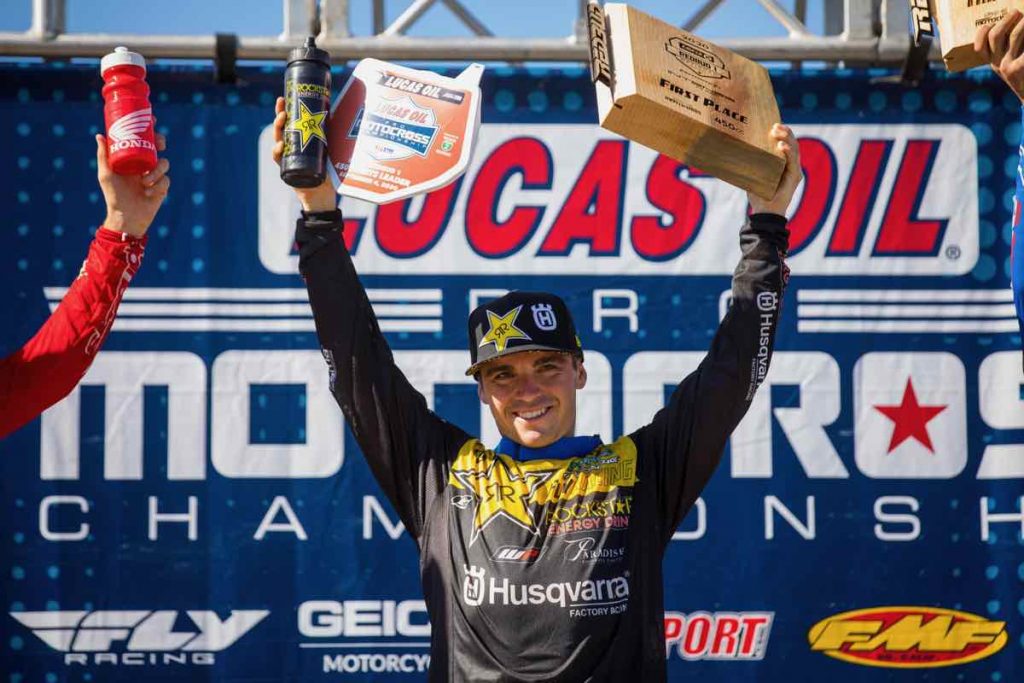 When the gate dropped on the final 450 Class moto it was once again Osborne who prevailed to take the holeshot ahead of Cianciarulo, while Yamaha Factory Racing’s Justin Barcia, Musquin and Sexton gave chase right behind them. Barcia quickly went to work, making contact with Cianciarulo and taking second.

Osborne continued his opening moto form by using the clear track to open a comfortable lead, while Barcia and Cianciarulo engaged in an intense battle over second, trading positions several times. The top three riders maintained their positions throughout the remainder of the moto as Osborne took his fourth moto win of the season by 2.6 seconds. Barcia finished second, narrowly edging out Cianciarulo in third.

Osborne’s 1-1 moto results helped him secure his third overall victory of the season and marked the first time that he has done so by winning both motos in the premier class.

“It’s a pretty special day for me at what is an iconic track,” explained Osborne. “This is one of the best tracks in the world and it’s cool to grab my first ever 1-1 here. You never know what’s going to happen and my goal is to go out and get maximum points every time I’m on the track. The weather was cooler today, which helped, but it’s going to be important to get recovered to line back up again on Monday.”

Sexton’s 3-4 scores were good enough to secure his first-career overall podium in the 450 Class.

“It was fun being back here for the first RedBud. I’m originally from the Midwest, so it’s nice riding a familiar track,” said Sexton. “Overall, the day was good. I qualified fourth and then in the motos went 3-4, which was pretty consistent. I had a lot of good battles and got second overall. The classes were all pretty close, so it was about being consistent both motos and trying to get results. I got a pretty good start in the second moto and almost had the holeshot, but got shuffled back a little bit. Overall we had a really good day with a first outdoor podium on the 450; looking forward to Monday.”

Barcia’s strong second moto gave him third (6-2) on the day. “Some great racing yesterday my first moto ride was unreal such a hard charge from a first turn crash had to use a lot of energy so second moto was difficult to say the least,” said Barcia after the event on Instagram. “Ready to CRUSH race 2 on Monday”

The perfect day for Osborne helped him extend his championship point lead to 26-points over Musquin. Barcia sits third, 13-points behind Musquin in second.