For nearly a decade, 250cc and 450cc machines dominated the capacity battle. But nowadays, with the exception of Yamaha’s WR450F, manufacturers are outselling their 450cc bikes with alternative capacities.

It wasn’t well publicised, but the 2017 Beta’s underwent some serious surgery. The 2016 Beta RR430 was a slow, under-sprung trailbike, but the 2017 model is very different. Most of the changes were in suspension upgrades. The length of the Sachs fork has been increased by 5mm, which has increased the travel, while new fork oil helps with heat build-up and the dreaded stiction. It also has different internal settings in regards to shims, while the top outer fork tube has a different profile, with different tapers to aid flex. You wouldn’t have read all this in a press release because Beta didn’t make it public. Instead, we had to tie down a redheaded Ben Grabham and threaten him with exposure to sunlight until he told us what he saw in the Beta factory on his visit to Italy last month. 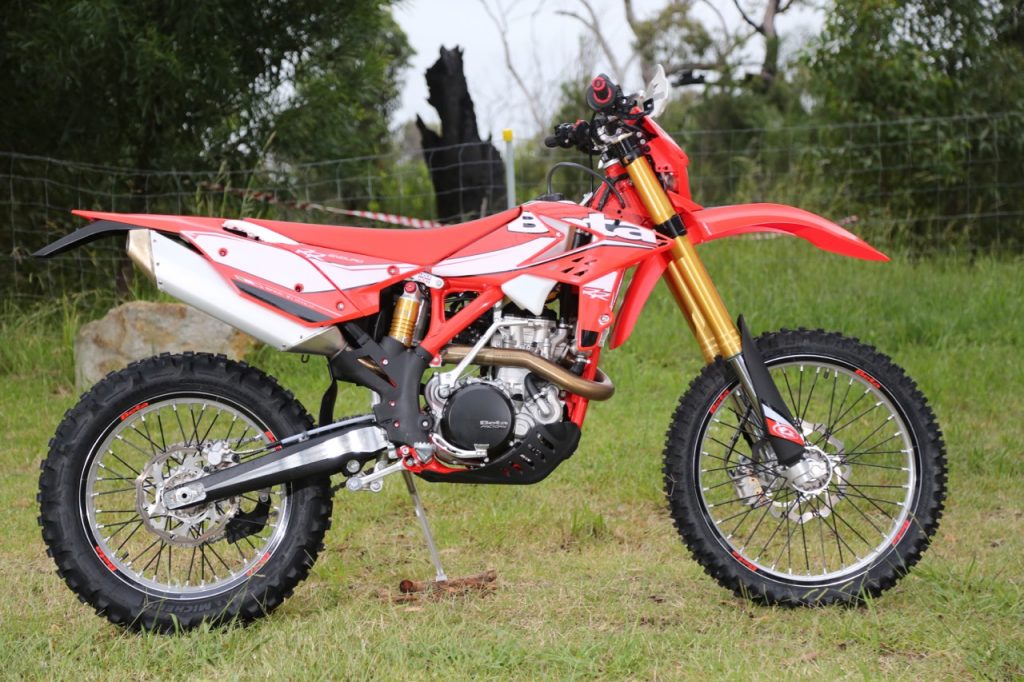 The Sachs shock has new valve specifications (again, something Beta did not make public) and finer high/low speed adjustment. The result is a fork and shock that isn’t soft like previous years, but isn’t harsh either. It’s progressive, comfortable and rarely deflects off small choppy bumps. In fact, we were so impressed, that Mat Boyd and myself agreed the suspension is just as good, if not better, than the impressive suspension on the 2017 KTM four-stroke models.

I’ve never been a huge fan of Sachs suspension, but after a day on the Beta RR430 I’ve changed my mind. It was comfortable, consistent, steadfast and predictable all at the same time. It was exceptional. The triple clamps have also been redesigned so that they are now lighter and more rigid. I’d like to say the 430 suspension is suited to trail or race conditions, but I can’t. It’s both. Sure, no bike out of the crate will be setup to handle fast race conditions in standard trim, but this gear will suffice for most clubman and even B-grade enduro riders.

The Beta RR430 engine has come alive in 2017. But like the suspension, Beta forgot to mention this. For 2017 the power was far more accurate and responsive. But thanks to the unique stepper motor that Beta employs, the power is still smooth and linear even with the added aggression. To achieve this Beta changed the camshaft, valve springs, starter gears (which were lightened), and adapted the ECU to suit the mods. The end goal was to maximize power but keep that signature smooth Beta feeling. The engine is easily one of the best power plants I’ve ridden. It has the torque to chug up hills and the responsiveness to fly through singletrail.

A common misconception about the beta engine is that it’s slow. This is not the case. The stepper motor smooth’s out the power and, unlike the KTM engine that hits abruptly, the Beta RR430 power comes on smoothly like Barry White.

The entire Beta range also receives a new-look speedo that incorporates a timer, average and max speeds and a battery voltage reading. The fuel cap now features a built in breather valve to vent the tank, while new graphics, silver rims with black spokes give it a fresh look. 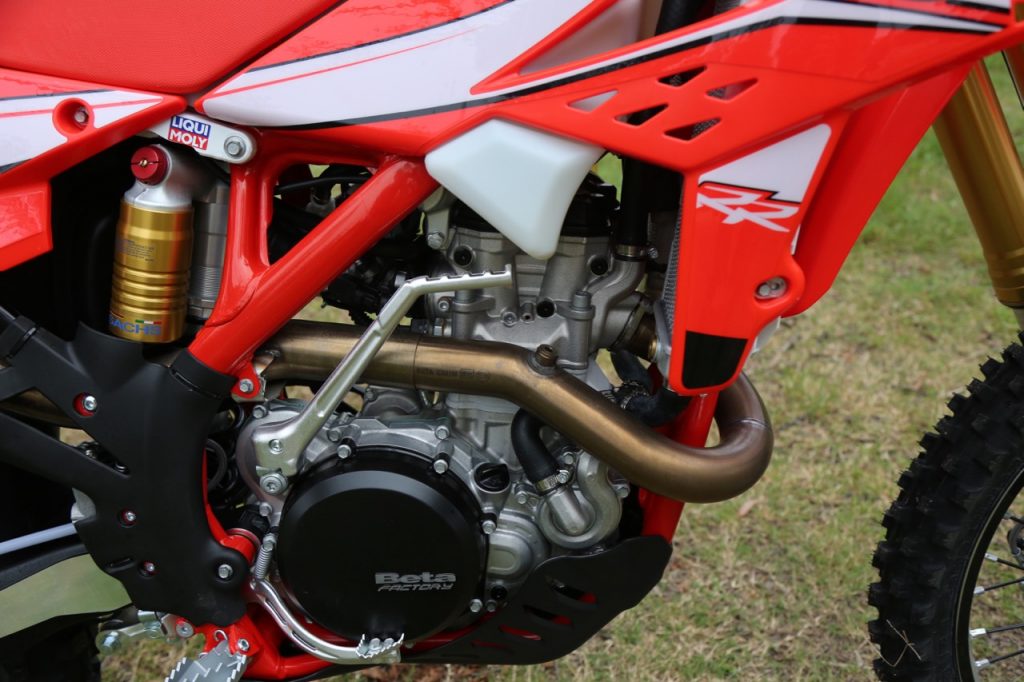 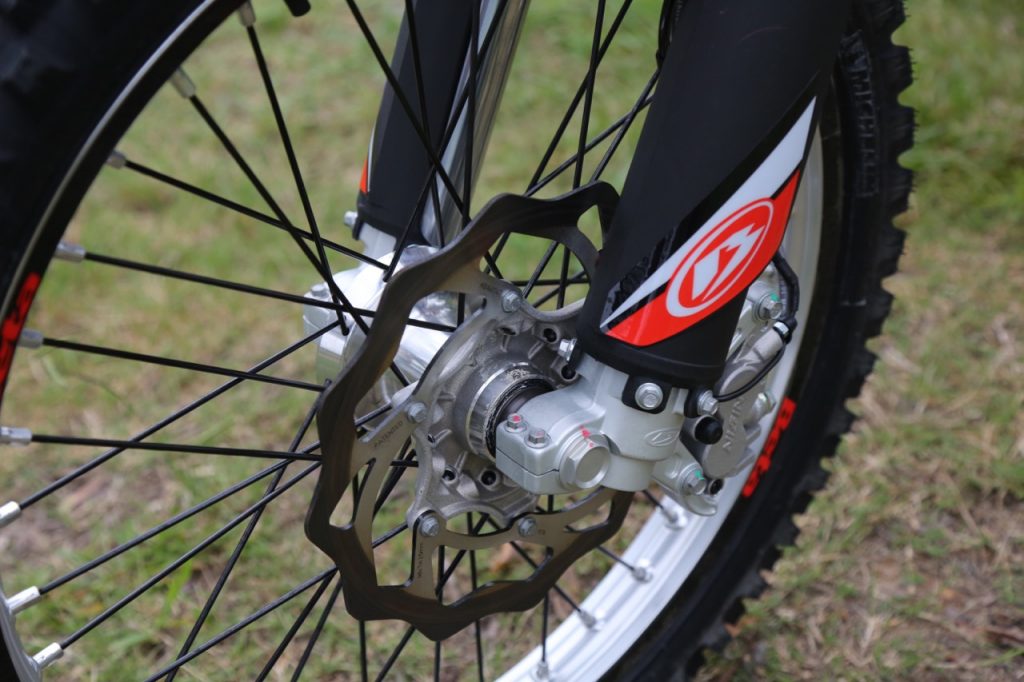 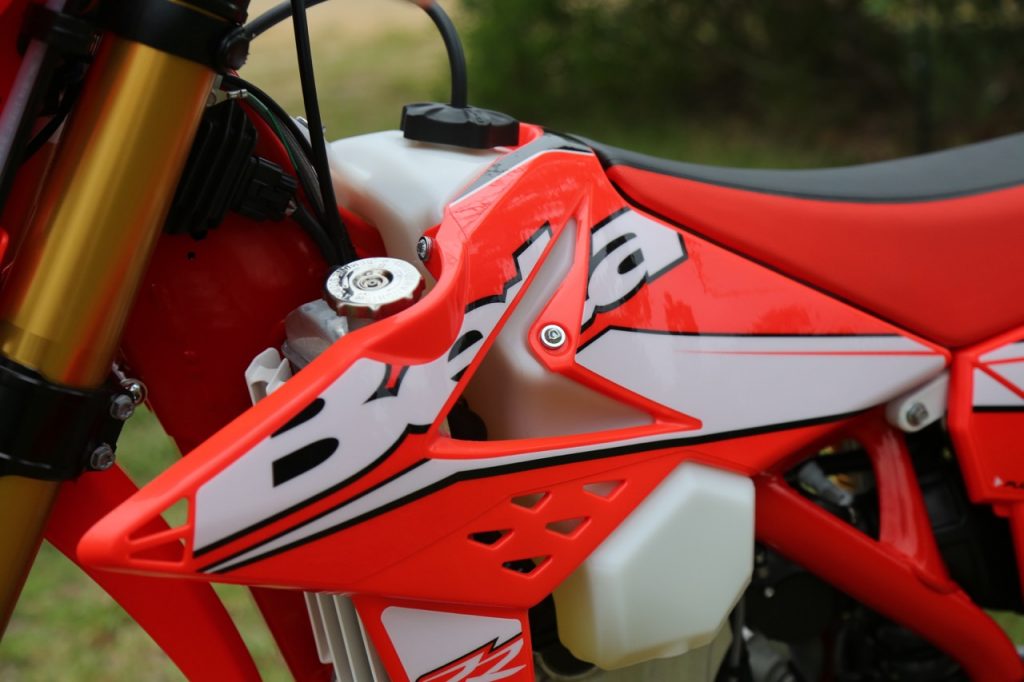 I was surprised by the Beta. I didn’t expect it to be that good. The power is a massive improvement over previous models. It’s a lot stronger through the mid-range and bottom-end. The engine was like a motocross engine because the bottom-end was so strong. But it was still easy to ride. It didn’t feel heavy and you didn’t have to muscle it around trees. The suspension and handling was better than I expected. We usually complain about it being unbalanced but there isn’t anything I would change. We jumped it over rocks and through whoops and there wasn’t anything it couldn’t do.

Check out the full test in ADB Issue #453