Husqvarna’s 2016 motocross bikes have broken cover at Budds Creek, Maryland in the US and Lee Hogan was there. The temperatures were soaring but the new Huskies were even hotter.

Husqvarna has taken a big leap forward with its FC250, 350 and 450 four-stroke models and the TC125 two-stroke. While Husky is trying its absolute best to not be mentioned in the same sentence as KTM there is still no denying that the bikes feel extremely similar.

I was super impressed with the FC250 and 350, which have seen big improvements in the engine and chassis. The chassis delivers what it says on the box by delivering improved agility and cornering thanks to revised geometry and the weight distribution. The motors on both the FC250 and 350 have seen improvements, with gains right the way through the rev range.

The 450 has received a huge amount of changes that combine to make a very useable package. And while the engine produces even more horsepower than 2015, a heavier flywheel has really smoothed out the delivery to make it more suitable for Joe Average. The gearing is one thing that I would immediately change on the 450 by adding two or three teeth to the rear sprocket to bring the engine to life and allow me to pull third gear through the tighter turns. 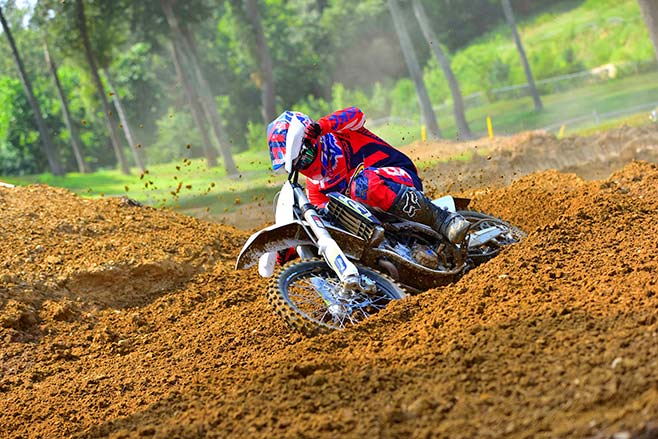 The new frame, carbon-fibre subframe, shock and shock linkage all add up to a terrific handling package on the four-stroke bikes. They turn extremely well and still keep their stability on the fast sections of the track.

Surprisingly, Husqvarna has stuck with the WP 4CS fork on all models and while I must say that in the past I haven’t been a fan of it I have to admit that the technicians have come up with a valving spec that worked well on the undulating Budds Creek circuit.

Carbon-fibre has been used for the subframe, instead of fibre-reinforced plastic, for increased rigidity and reduced weight while a new seat should end complaints about the slippery 2014 perch.

The engines in the FC450, 350 and 250 are smaller and lighter and have been reconfigured for optimal mass-centralisation. The four-strokes have benefitted from a serious reduction in weight, with the FC450 being 5.2kg down on the previous model.

The two-stroke range has been over-shadowed a little by the changes to the four-strokes. The TC125 has seen the most change with a smaller, lighter engine that puts out 40hp as opposed to the 38hp of the previous model. The bike is 3.2kg lighter. The TC250 and 85 two-strokes are unchanged.