The Mt Kembla Two-Stroke Cup is in its third year at the Wollongong Motorcycle Club’s home track and ADB Tech Editor Mat Boyd joins in on the fun.

You’d have to be blind, deaf and have a blocked nose to miss the fact that two-stroke racing is making a comeback. The two-stroke resurgence is obvious with the 125 Gold Cup at the MX Nats, the Amateur Cup at the AORC and Red Bull Straight Rhythm going smokers-only in the U.S.

In NSW, the Mt Kembla Two-Stroke Cup is in its third year at the Wollongong Motorcycle Club’s home track and going gangbusters. I could almost smell the premix from the Central Coast so it didn’t take much to convince me to prep a Yamaha YZ250 and head down.

The hype leading up to the event was huge but I was not prepared for the massive set up the club had put together. It looked as if they had stolen the layout from Straight Rhythm and bent some turns into it. The track was in perfect condition and the pits and car park were alive with a certain buzz I haven’t seen around a racetrack since the ’90s. Everyone was happy, chatting, high fiving and checking out each other’s bikes while having a yarn, bench racing and shaking pre-mix fuel drums. It was a happy atmosphere that was infectious and left me with a smile for the entire weekend. 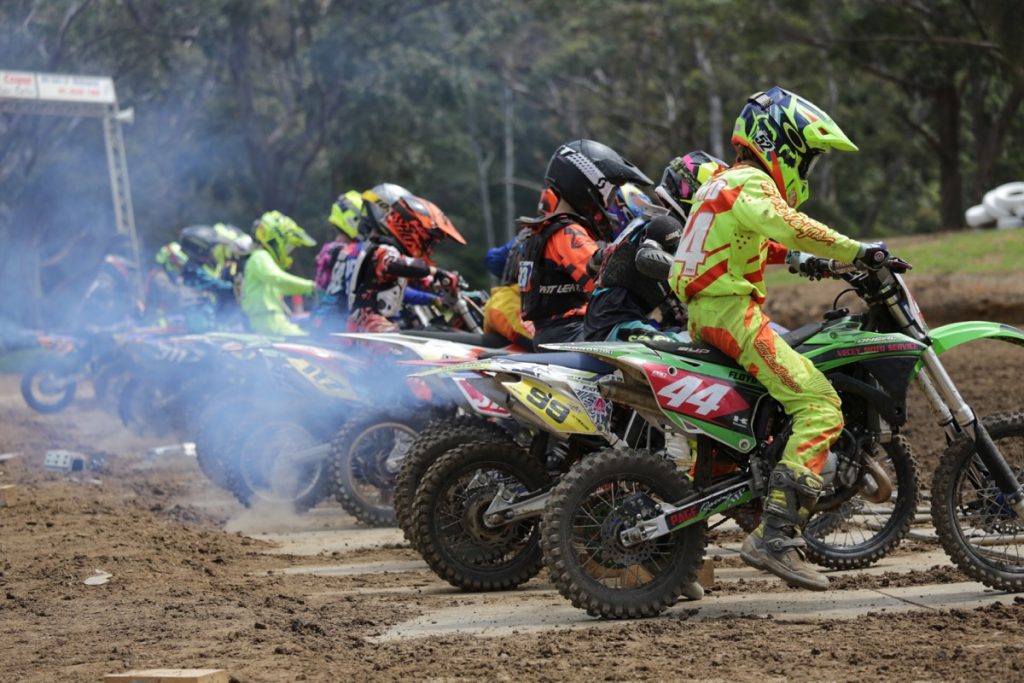 The top-five point scorers from the three races qualified for the Two-Stroke Cup Feature, which was 20 minutes plus two laps and had a prize pool of $2650. Riders in the non-competitive Clubman class could not qualify.

Some riders qualified in two classes (500cc and 250cc) so they choose one of the two and the next rider in line for the other class got the other spot.
The club also awarded prizes for the Over-35s and women who made it into the feature. The top three were awarded $200, $150 and $100.

Once all the formalities were over it was time to hit the track. I tried to give myself some room between riders while I got familiar with the track in just five laps. It gave me a fair idea on how the bike was handling so I decided to stiffen the suspension up to handle the faster jumps as well as the downhill section.

The YZ250 was standard apart from the GYTR parts that come on it at the moment so the suspension was a little on the soft side but firm enough for me to still ride comfortably. In a perfect world I would have liked to change a few other things but this race was all about fun and the YZ gave me more smiles in one weekend than I’ve had on a dirtbike in years.

Lining up for my first race, the smell of two-stroke fumes was strong and there was a decent haze over the track that took me back to my 16-year-old self flapping off the back of a 250 two-stroke. Another thing that took me back quite quickly was the concrete start. 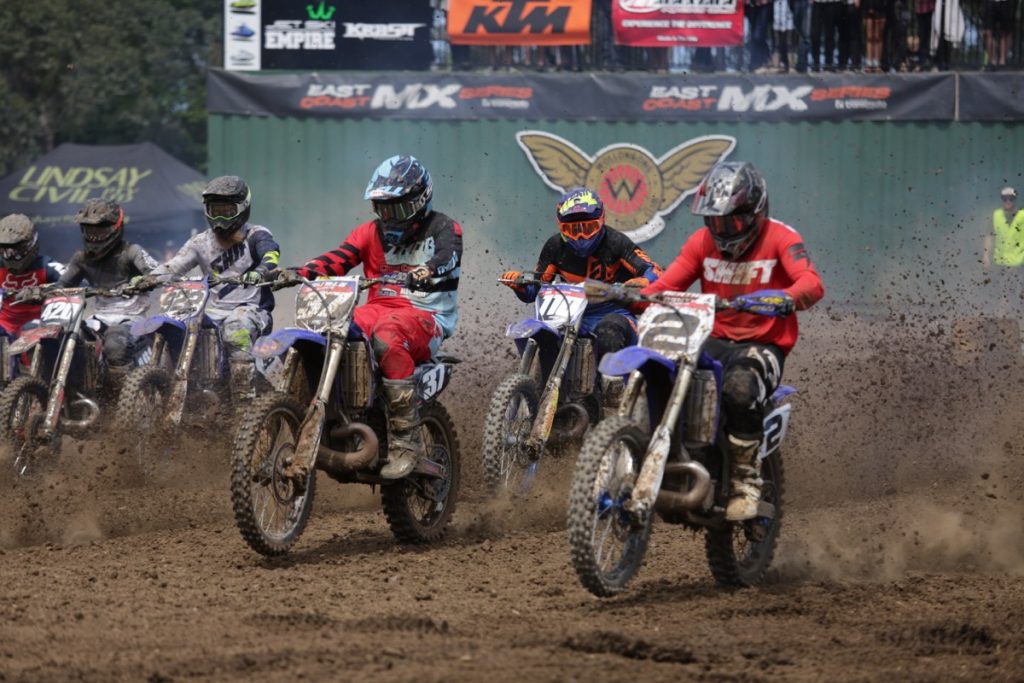 Me and concrete starts where far from friends 10 to 15 years ago when I was racing full-time. We’re still not mates and I didn’t round the first turn at Mt Kembla in the top 10 all weekend. In the first race I narrowly missed going down in the first corner and got my brake lever pulled off when it hooked up in someone’s shirt.

Mt Kembla isn’t one of the easiest tracks to ride with no front brake but I still managed to climb my way back up to fifth. My other two races on the Sunday started out as carbon copies of the first, with me struggling to get off the startline, rounding the first corner buried in the pack and then fighting my way back through to two fourths. While my speed and my racecraft actually surprised me I felt like I could have managed to sneak onto the bottom step of the podium had my starts been better as my speed was good for it. 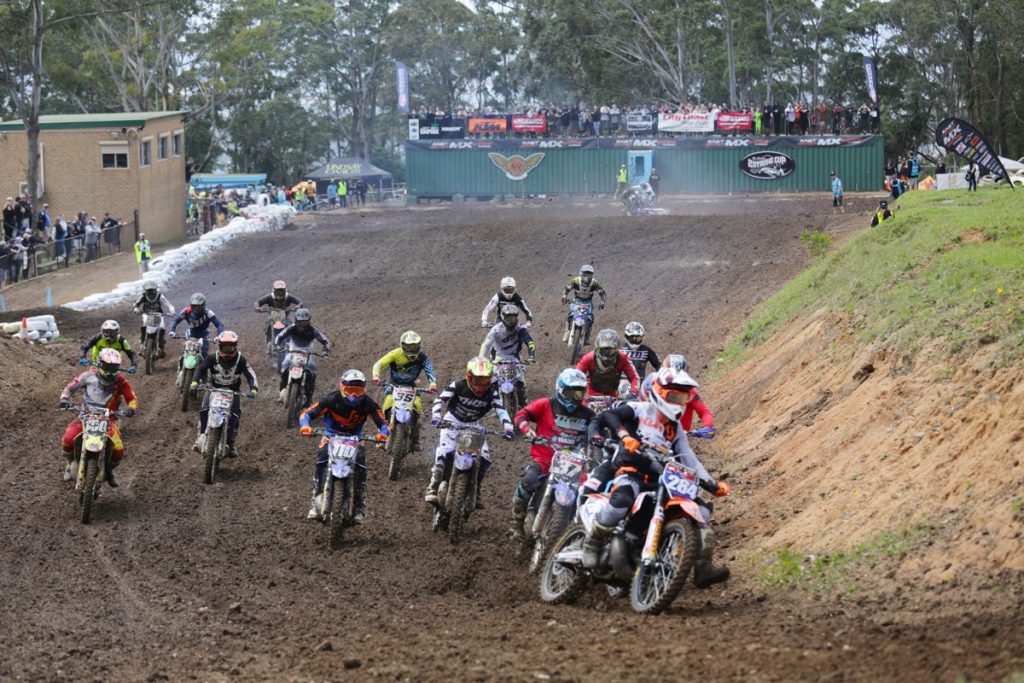 Sunday started out just as electric as Saturday had finished. Kids were racing, high fiving and then hanging out in the pits just as they should be. The announcer was all over the microphone calling the racers and pumping up the atmosphere while my family got to sit at home and watch all the action via a live feed on the internet. Not bad for a club event!

I even got messages from people on Facebook who watched my races congratulating me on my performance. Seeing the vintage guys going at it and having a ball was awesome. Granted some of them looked like they came off the track needing a defibrillator but at least they were still smiling.

Sadly, club president Paul Trevelow took a serious hit on a high-speed section of the track and was taken to St George Hospital in Sydney with a collapsed lung, six broken ribs and fractured wrist that required surgery later. I’m sure Paul will be happy to know that the kids used the time while he was being stabilised to have tyre-throwing competitions.
I’d managed to finish fourth overall in my three races and was eligible to race in the Two-Stroke Cup feature, where the best riders from each class go for it for 20 minutes. As expected I got another terrible start but I had a bit of time to come through the pack instead of just five laps. 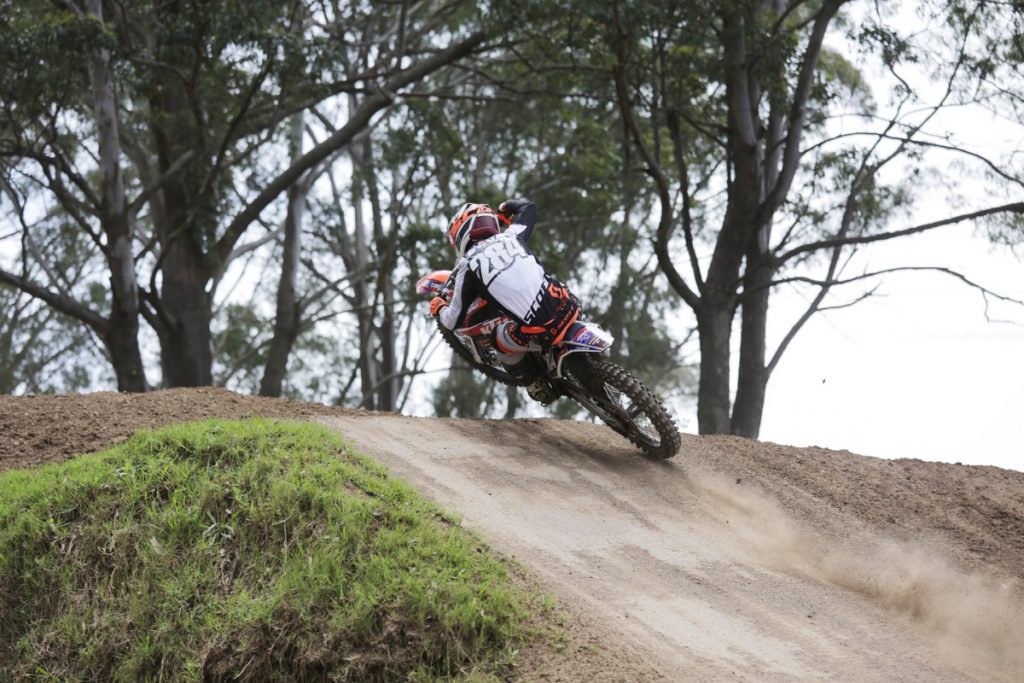 What I didn’t anticipate was how much the track had dried out and how dusty it was going to be. I made several passes in the first 10 minutes but once I caught up to the bunch of riders behind the leaders I was seriously struggling to see, especially on the downhill section, where you jump before a left-hand turn.

After a narrow miss and a few moments, I decided to back it down and play it safe. I’ve written reports like this in the past with me ending up in hospital and, after a fantastic weekend, that was just not how I wanted to end this one.

WILL I GO AGAIN?

I’ve already written this event into my calendar for 2019. It was one of those weekends where it doesn’t really matter whether you win, just being there and getting to experience this event with like-minded people was an experience. The entire event had a real ’90s feel to it, back when everyone went to the track to be mates and didn’t take it so seriously. 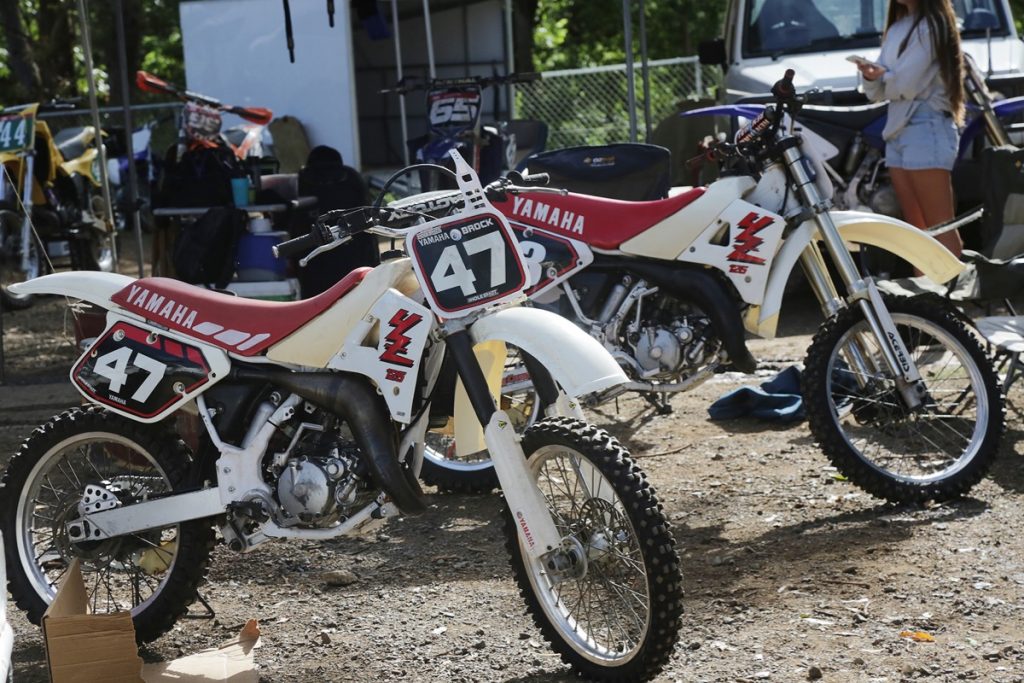 Clerk of the course Alan Pavey explained that this was no accident. “As this was a two-day program and classed as an Open event most of the finer details were bounced around within the race committee and nutted out weeks before the event,” he said.

“I rely heavily on my fellow officials, such as race secretary Chelsea Cheney and race steward Bob Johnston … I was very happy with how the meeting went down. My colleagues and key volunteers are always checking with riders throughout the event and the vibe was electric. The best part about this event has been the attitude of the riders and you could feel the excitement growing with each race.”

While the two-stroke classes are being thrown into major championships it is rare to see an entire weekend dedicated to two-stroke racing. And not once in this story have I mentioned the deep-mulch ruts at Mt Kembla or the numerous jumps that turn this track into real scrub country. The place is a heaven for two-stroke racing, so dig out that old two-banger shed and I’ll see you there next year. 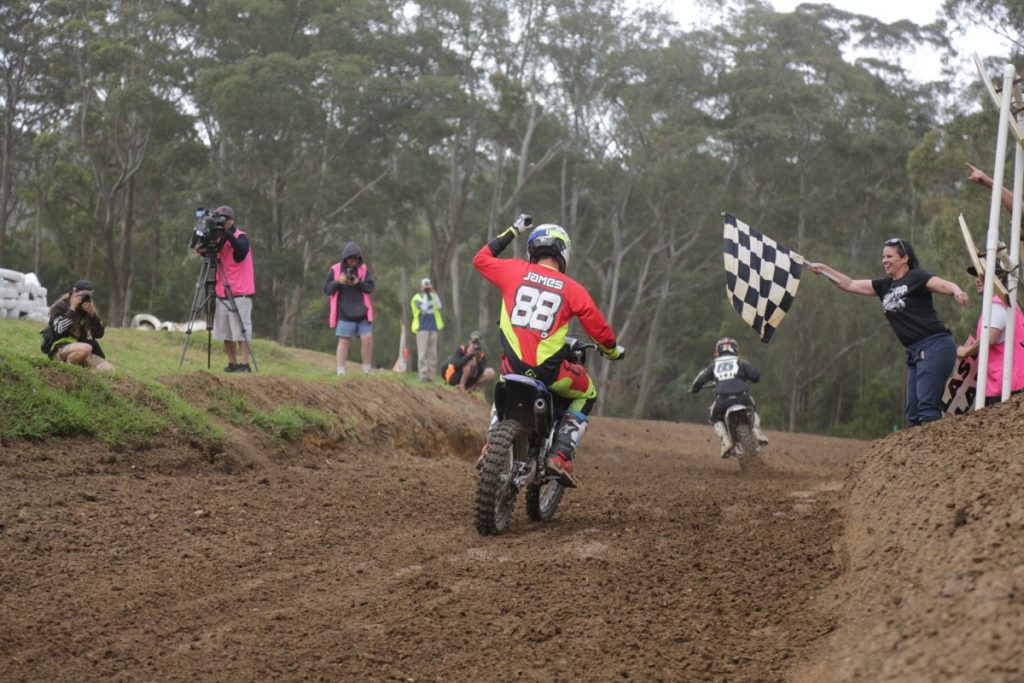 How many years has the meeting been run?
The Two-Stroke Cup idea was floated at the Wollongong Motorcycle Club by some general committee members. My husband, Alan Ninness, was the head of the race committee and, as a keen CR500 rider, he and a small group took on organising and running the first Mt Kembla Two-Stroke Cup in 2016. The event was a huge success and has got better each year as WMCC works to continuously improve the club, its facilities and our signature event. This was the third running of the Mt Kembla Two-Stroke Cup and it’s continuing growth shows there is a real place in the sport for the fun times that two-strokes represent.

How many riders were there? There were just over 185 riders with many riding in multiple classes, resulting in over 250 race entries. Since the first running of the Two-Stroke Cup, we have seen numbers increase by 8% and 18% year on year.

What kind of work goes into organising an event like this?
A lot of volunteer hours for many, many months. There is a lot of pulling in favours from many people. Getting all the processes right and everyone all on the same page. Communication is vital with the team and everyone has their part to make the event run smoothly.  From seeking sponsorships, to taking entries, promotion on social media, ensuring the track is prepped right, and that the pits are ready. Then there’s all the other things like trophies, signage erection at the track, race programs and, of course, heaps of giveaways ready to go for the many riders and spectators. One of the main reasons this event has been such a success is that the club set out with the goal of creating a showcase event. It is not about making money, it is about making the most memorable experience for competitors and spectators. 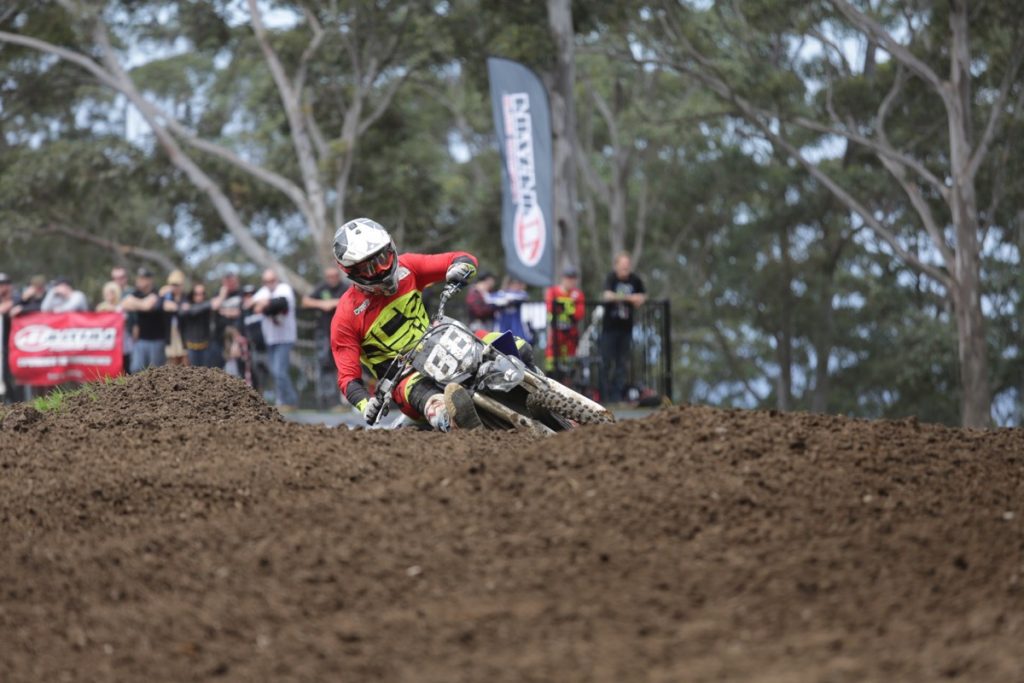 Any plans for next year?
Some ideas on the table include:
• Looking at the age split for the older bikes to possibly go to pre-2000 and pre-1990, as a lot of the older bikes seem to be becoming more museum pieces than race bikes, and the hills on the Mt Kembla circuit look a lot bigger from the top with good ol’ drum brakes all round.
• Looking at the split between how much is run on the Saturday versus the Sunday.
• Potential for a Junior Two-Stroke Cup for 12-15 Years 125cc riders.
• Legends Ride each day for some of the two-stroke champions of years gone by (maybe we could even trick some of them into racing).
• Add another platform for advertising/broadcasting the event
• Potential for introducing a Vets’ class.
• Bigger prize-money

All of the sponsors, the WMCC committee, race committee and the track admin. and maintenance team. ‘Bushy’ for his commentating and organising of the FMX show. The race officials, timing and scoring crew and the Live Streaming team.