The Suzuki rider grabbed the holeshot and led all 20 laps of the main to claim the win ahead of Kawasaki’s Eli Tomac and Team Honda HRC’s Cole Seely.

It was obvious from the gate drop that Red Bull KTM Factory Racing’s Ryan Dungey had one thing in mind, and that was securing the championship. The KTM rider rode a safe race and minimized risks and for the first time this season finished off the podium in fourth place. However, this was enough to secure his third Monster Energy AMA Supercross Championship, second in-a-row.

“Obviously 4th place isn’t the goal but the championship is and it’s nice to have a little cushion and wrap it up a round early,”Ryan Dungey said.

“The (31 consecutive) podium streak was cool and I was definitely going after Cole Seely there just to try to get on the podium but I gave it my best and did what I could but I wasn’t going to do anything stupid either. It’s been a fight, mentally battling week in and week out, with lots of riders challenging us all season. I feel like I was consistent across the board the whole season and 4th place – if that’s our worst finish all season up to Round 16 – I don’t think it’s bad.” 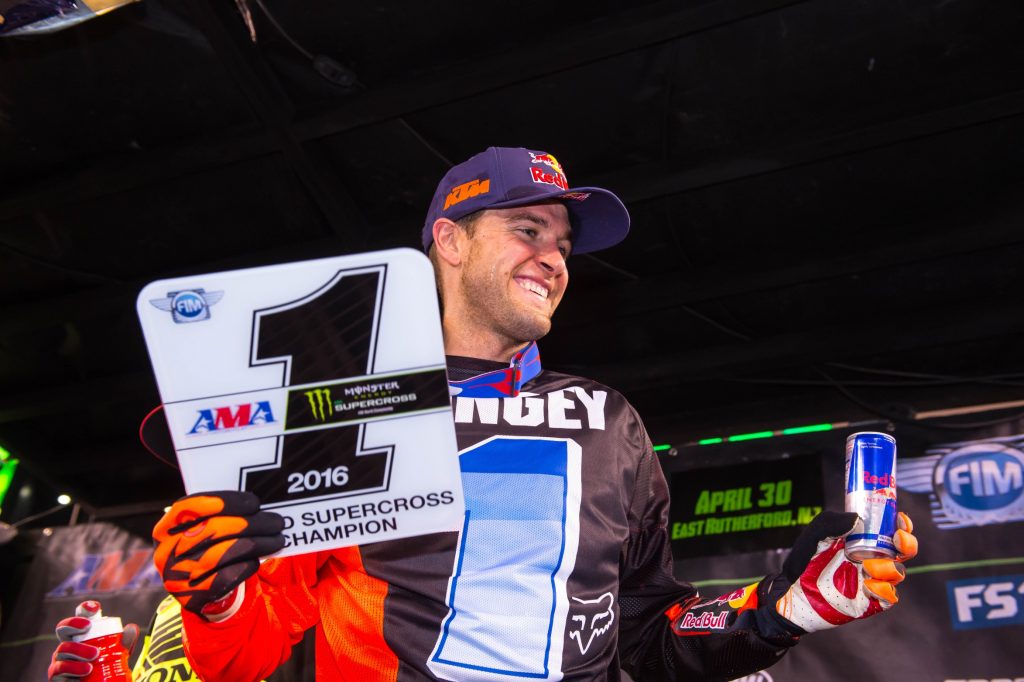 Pit Beirer, KTM Motorsports Director commented, “We are just extremely happy to have another championship. This was a dream of ours for so many years and last year it happened for the first time but as we know it’s a difficult sport so to win a championship is one thing but to keep the level is another one. The team here in the U.S., and Ryan Dungey, they didn’t just keep the level; they put it on another level again! It was amazing to
watch Ryan this year, how strong he was week in and week out, and we just want to thank the team and Ryan for what they did.”

Red Bull KTM Factory Racing Team Manager, Roger De Coster added, “I’m just super happy to be part of this and be able to help Ryan win this championship for KTM. I have to thank everyone in Austria that has helped us, including the WP side, Pit Beirer and Mr. Pierer especially, because he is the one who commits the budget and the money to allow us to do this and allow us to do what we love to do, which is race and win races.

Without him this would be impossible. I feel very fortunate because I feel that our crew here in the U.S. is the best crew in the paddock. I’m certain we can do this again because I’m not happy with stopping here, we have to do it again and again and I think with the commitment of the crew in Austria and KTM we can do it again.”

Monster Energy/360Fly/Chaparral Factory Yamaha rider Chad Reed was placed fourth at the first turn but dropped back to ninth over the course of the 20 lap main. Reedy now sits in fifth in the overall Championship points standings with one round to go.

In the 250SX East Championship, Honda rider Malcom Stewart battled with Husqvarna’s Martin Davalos in the early laps of the Main Event but it was short lived after Stewart passed for the lead and checked-out.

Stewart now holds a 14-point lead over Aaron Plessinger going in to the East/West shootout in Las Vegas.

VIDEO: A Tribute To Jeff Leisk

After two decades at the helm of KTM Australia, now formally known as the KTM Group Australia and New Zealand, Jeff Leisk is stepping away to embark on his next adventure in life.