Back in 2010, Adam Riemann tested the all-new Suzuki RMX450Z for ADB. He didn't just flog it through any old trails, Adam took the RMX450Z racing in the AORC.

It was a baptism of fire for the Suzuki RMX450Z but it showed its strengths in a race situation. Check out Adam’s videos which accompany his story.

I’ve come to realise the pace of Aussie enduro riders is faster than ever before, and the conditions on race day are a lot tougher than I can remember. At least, that’s the way it played out when I rolled up to race the final round of the 2010 Yamaha Australian Off-Road Championship near Warwick, QLD.

“You picked a hell of a round to come and ride” were the encouraging words from the boys. I’d just circulated a course that had cut up into a moto war zone, following the practice laps. How did I get roped into it? When ADB asked me to race the new Suzuki RMX450Z, it was really a no-brainer, given I’d already tested the new Suzook at its debut launch early in the year.

I’ll admit I was excited to ride one in race conditions and it seemed like a practical choice of machine, given I’d not entered a race in months. On top of that, if you’re picking up a bike on the Monday before a National event, you really need something requiring minimal mods to have it ready to go. The purpose-built RMX seemed like the perfect choice. 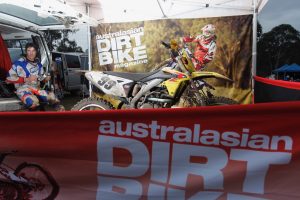 FACTORY HERO FOR A DAY

The bike was in the custody of the Suzuki race team, so I took advantage to get it dialled into my riding style. I stopped in at Jay Foreman’s workshop in Newcastle to collect the steed, only to find the boys were going all Factory on her.

The addition of MX-style handguards were a godsend (as I’d later discover), and Simon, the race team mechanic, had already fitted a heavier spring in the rear shock to suit my 87kg weight, based on how I thought the RMX felt at the press launch.

To compliment the change in spring, Jay fitted his RG3-spec valving, which was starting to take the bike from being a standard package. However, if it were my bike, I’d have done exactly the same thing before racing it at National level!

As for the engine, the only disappointing aspect of the standard bike is the silencer. The Suzuki guys also knew it was too loud and crackly after removing the baffle to race-spec, which we piped up about at the launch. In its place, they fitted a sweet Yoshimura pipe and muffler, which was also mapped to perfection with the EFI.

From there, Jay took me out to the track – where the launch was hosted – and spent a few hours getting me settled into the bike’s geometry. The track – a fast, choppy MX circuit – had hardpack ruts sprinkled with powder and garnished with loose chunks of rock. To top it off, a gnarly 10-minute singletrack weaved around the surrounding mountainside, which was more what the conditions would be like in the race. Perfect.

If we could get the bike dialled here, it’d be ready for anything. While it felt foreign, awkward and sketchy to steer during my first two laps around the MX track, Jay tweaked the fork compression and rebound and adjusted the high-speed damping on the shock. Better.

The bike levelled out front and rear and felt a lot more predictable across the dodgy surface. The last adjustment made was to raise the fork through the clamps and get a bit more weight on the front. We adjusted it down to the middle line before I hit the enduro loop. I came back with a smile on my face and Jay’s work was done.

PROOF IS IN THE POUNDING
Back on the road for QLD, my next stop would be a couple of days in Singleton to hang with Toby Price. Toby took me out to get a bit of saddle time on the RMX at his local tracks, which also made me realise my fitness level was hardly ready for a big weekend of racing.

That said, come race day I was a little more comfortable with the bike and was starting to appreciate the benefits of its ultra-responsive EFI and plush suspension. In fact, the Suzuki’s ability to track in a straight line at a burst of throttle was saving my arse, while I was trying to get accustomed to the speed of racing between the trees.

There’s so much to process, so you need an amount of faith the bike will react off bumps and ruts predictably enough to let you attack a course you’ve had no practice on, and is changing every lap. In racing, this is by far the most important trait to have in a bike, and while it took some time to dial it in to suit, the Suzuki RMX450Z has that feel.

The best thing about testing a bike in race conditions is that when the clock’s ticking you just ride the bike as hard as you can. You immediately uncover its faults, like its tendency to drift the front when trying to brake hard into the apex of turns. Without the help of a rut to catch the bike’s mass and steer it through the turn, it was at times difficult to keep a consistent line and flow. 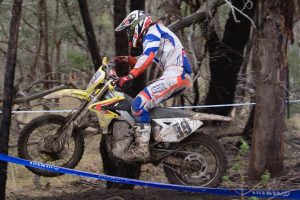 The bike steers better and plants the front wheel better when the rear is stepped out in a slide. The problem here is there’s no room to be sliding between the ruts and trees – there were even times I’d be shutting the throttle in third-gear and flicking the steering so my ’bar ends could skim between two trees; a sign I was racing the clock. After dropping the fork a few millimetres, I came to a happy medium of overall stability and feel through the turns.

The Suzuki RMX450Z is a great starting point for anyone who’s looking for a bike built to take race conditions. The engine is superb, amazingly responsive and wide-ranging: almost as if it were a 500cc-plus machine.

My only concern is in perfecting its steering, which I believe lies in the offset of its triple-clamp. I’d be inclined to return it to the same spec as the RM-Z motocrosser, which is far superior when pushed. The lack of rego is undoubtably a factor in it not selling in the numbers it deserves to trailriders, but if you’re after a racebike, the RMX is a few small tweaks away from a National-level weapon. 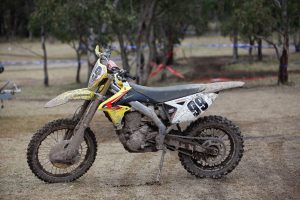