While lying on a hospital bed in the US, doctors came bursting through the door to Toby Price with a look of sheer terror on their faces.

“Whatever you do, don’t move!” they yelled at Toby, who was complaining about a sharp pain in his neck.

Toby had just returned from a handful of scans in the emergency room, and was awaiting clearance from the doctors following what he thought was just a regular crash during a race in the US. Those five words sent shivers of fear down Toby’s broken spine. The doctors explained to Toby Price he had broken his C6, C7 and T1 vertebrae in his neck and required immediate surgery, otherwise he could lose the use of his legs. Toby lay in the bed motionless, with a sudden feeling of despair and hopelessness, thinking, how did this happen?

What Toby thought was a small crash was actually a big, high-speed get-off. He had knocked himself unconscious in the process, so his memory of the event was a little hazy.

“I don’t remember much,” Toby said of the crash in the Hare & Hound race he participated in while in the US, practicing for the Baja 500. “Everything was going good. The bike was good and we had a great set-up. I was sitting in second and definitely wasn’t riding over my head. I was behind my KTM teammate Kurt Caselli and keeping my distance, because he was in a position to take out a championship while I was just there for a one-off race. I came around a corner and got on the gas hard, and that is the last thing I remember.”
Toby had knocked himself out so badly the following 15 minutes was completely wiped from his memory. “I don’t remember what I hit or what I’d done.” 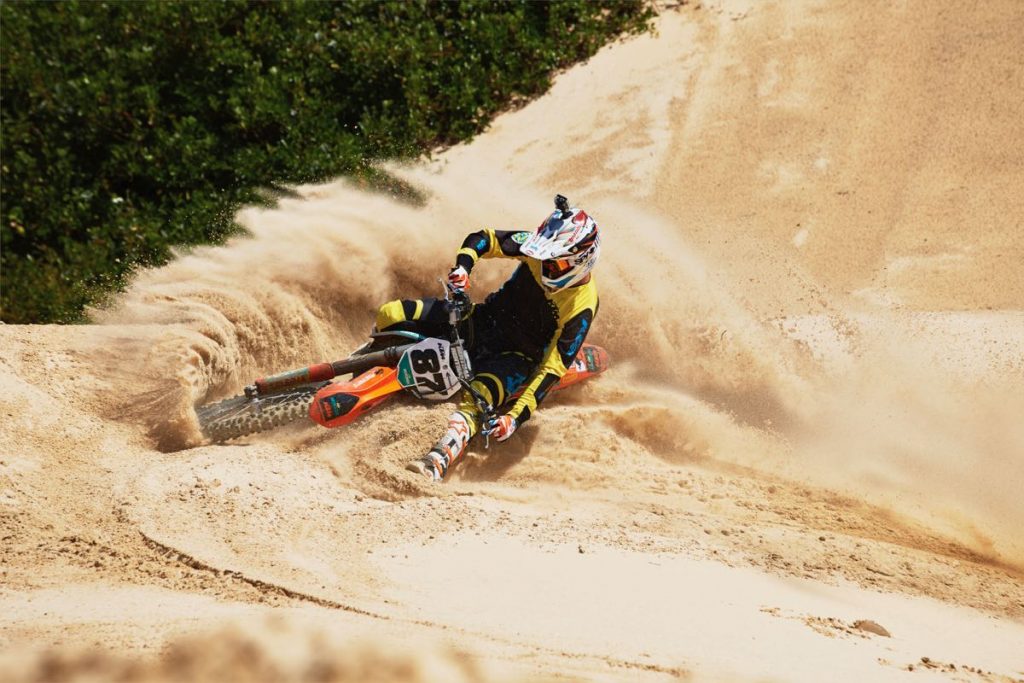 He was informed later by a third party how it all happened. “I got told later I either got caught up in some car tyre-tracks or that I hit a rock,” Toby said while trying to remember what he’d been told.

“I was in second and the guy who was in third pulled up to me to see if I was okay. Apparently I told him I was all good. I don’t remember hitting the ground, I must have been alert and still able to do stuff, but it rattled my head pretty good.

“Unfortunately the guy behind me crashed just up from where I was, so the rider attending to me went off to see if the other guy was okay. Apparently I then got back on my bike and rode over to see if everything was okay. I began asking a bunch of questions like why am I here, and what are we doing? It was at that point the rider who was helping us decided to get me off the bike and sit me down.

“Minutes later I had stripped down to just my pants and begun walking off into the desert. The competitor assisting the crashed rider turned around and I had walked 100 metres away.”

After rushing off to stop Toby from wandering deeper into the desert, the attending rider knew something definitely wasn’t right with Toby, who had also begun complaining about a sore neck. Toby was then picked up by a helicopter and taken to the nearest hospital. Again, he remembers none of this. His next memory is of the doctors barging in and delivering that dreadful news, that he had broken three bones in his neck. 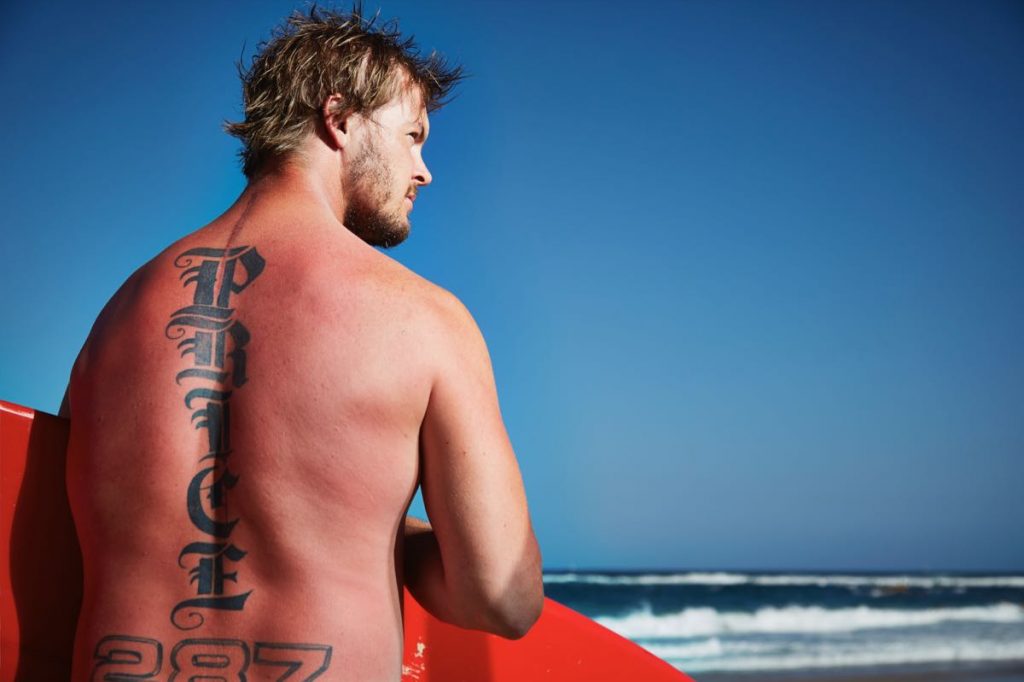 “It was pretty frightening, but the good thing was I could feel everything and move.

“I didn’t know what to think or how to react. Everything was going so good for me [at the start of the trip] and now I was lying there thinking, will I ever walk again, or will I ever ride again? Will I get back to being normal? The doctors told me not many people can do that amount of damage and get up and keep walking. It hit home pretty hard and I didn’t know whether or not I would be able to live my normal life. But I knew within myself that I couldn’t just give up on a sport that I love and, if I can get back on a bike, then I would. Something then clicked in me and my attitude changed – whatever it takes to get better, I’ll do.”

Just when he thought the situation couldn’t get any worse, it did. After learning that he was teetering on the edge of becoming a paraplegic, Toby was then dealt an even worse blow. Confusion over the appropriate insurance cover left Toby in an almost unimaginable situation.

“I had been in the hospital for two days when I found out the insurance I had didn’t cover me for the race I did.” Hearing this news made Toby feel like “someone had just kicked me in the face”. The doctors told Toby either he pays for the surgery there and then, or he must leave immediately. The doctors told Toby if he did not have the operation he would be in some serious trouble. Toby attempted to get the money together but couldn’t find anyone or any organisation willing to lend it to him. Toby then faced the harsh reality of being booted out of hospital with his neck hanging on by a thread. 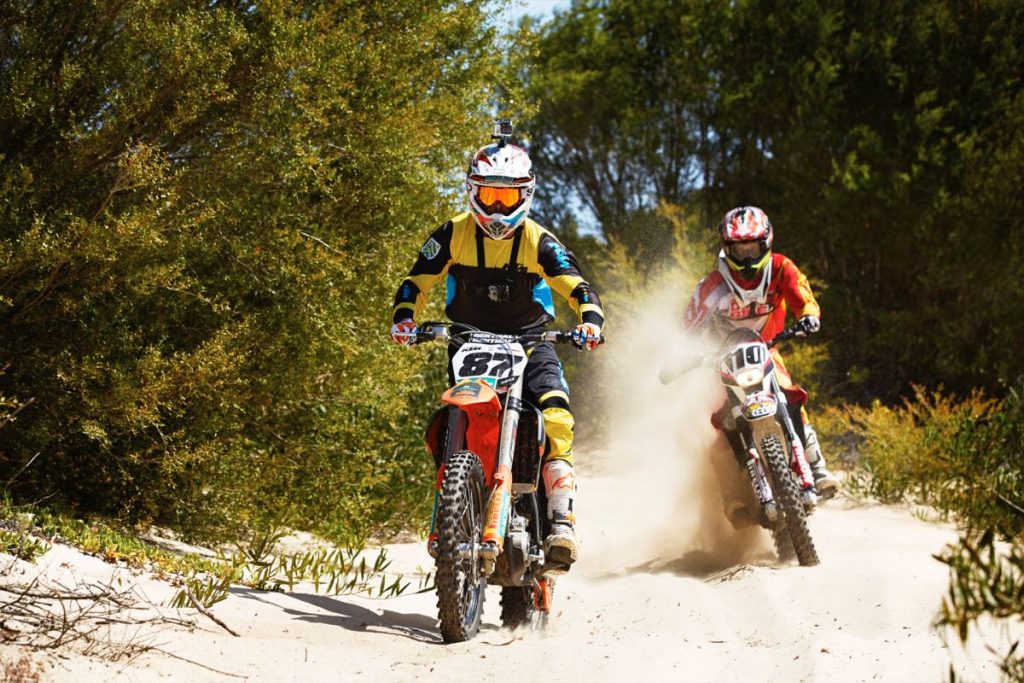 “The only option was to come back to Australia and have the operation done here,” Toby said. “The bill was going to be half a million bucks, which I didn’t have. So while there was a risk in travelling home there was nothing else I could do.

“The plane ride home was the most nerve-racking experience I have ever had to go through, knowing I could do more damage. With my head in a halo I was nervous, I got some weird looks in the airport, too.”

After arriving in Australia on ANZAC Day 2013, KTM’s team trainer Tim Cole arranged for Toby to be flown immediately to Brisbane Hospital where he was to be operated on by Dr Paul Lucina, the same doctor who operated on Ben Grabham in 2012 when he suffered a back injury following a collision with a Kangaroo.

Being told he would be able to ride again by Dr Lucina raised Toby’s spirits – the light at the end of the tunnel began to appear. “Being told I will be fine and that I will be able to go back to doing what I love [riding] lifted my spirits.”

By 11am Dr Lucina had organised to do the operation that day and showed Toby what they were going to do. “We will at least put eight screws and two bits of rod in your back from C5 to T1 and that will get you back to normal, Dr Lucina told me. At that moment it was like 10 Christmases all at once.”

Once Dr Lucina began operating on Toby’s spine they decided to fuse from C5 to T1 as well. So that’s four vertebrae in Toby’s neck with some solid hardware. 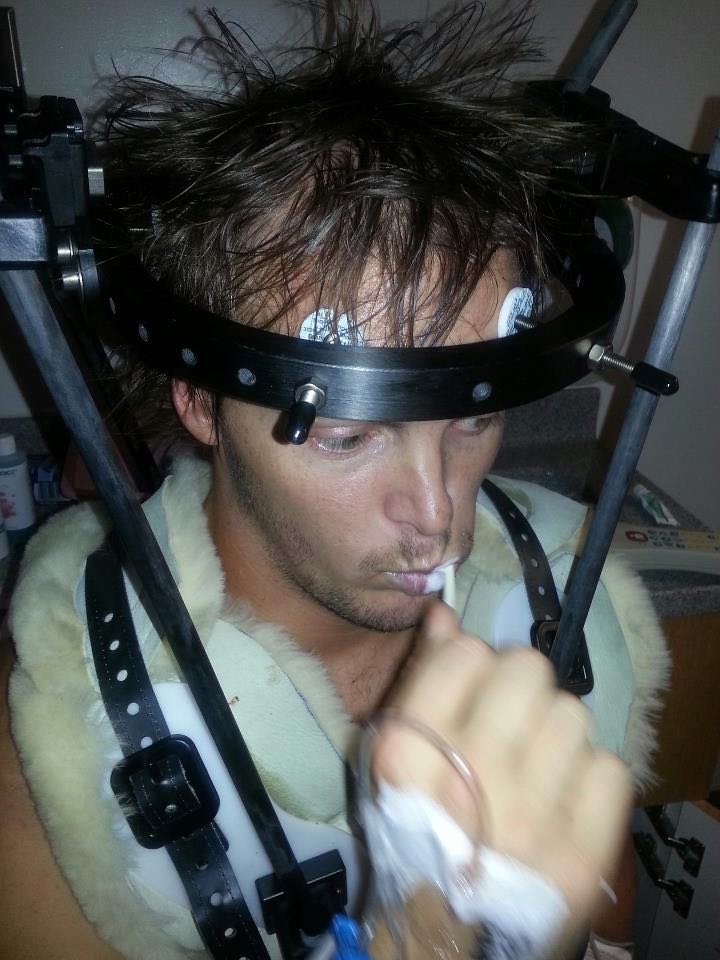 The halo Toby Price wore for his plane ride home

But the battle wasn’t over. Recovery with an injury this serious can be just as dangerous and painful as the operation to stabilise the injury.

“When I woke up the following day it felt like I’d been hit by a bus. I had a bed that had a button to sit me up straight and help me out of bed, but I couldn’t even press the button. I couldn’t lift my arms to get a toothbrush to my mouth. I couldn’t even get a shirt on without assistance in the two weeks following the operation. It really tore me apart,” Toby said of the first moments after waking up from surgery.

“After I left the hospital I returned home knowing I had a lot of hard work ahead of me. I got home and just chilled out for the first couple of weeks. I then started my recovery a little early. About two weeks after the operation I got some mates to come and pick me up and take me over to Newcastle beach, where I tried to walk in the deep sand to keep the blood flowing through my body.”

Being able to move and return to a somewhat normal life changed Toby’s mood after two weeks earlier being told he was a whisker away from being paralysed.

“I’m at the six-month mark now and it has been a long and hard fight. I’ve had my trainer Tim Cole on-board helping out with everything including physio. Whatever programs the doctors and physios had planned out for me I would always try and squeeze another session in,” Toby said with a smirk on his face.

Recovering from his injury and returning to racing was paramount for Toby, so much so he decided not to drink during this period (with the exception of a celebratory beverage, we will call it, in Alice Springs following the Finke desert race) and adhered to a strict diet just to improve his recovery time. Whatever Toby had to do to get back on a bike faster he did, even if it meant giving up some of the indulgences we all love. 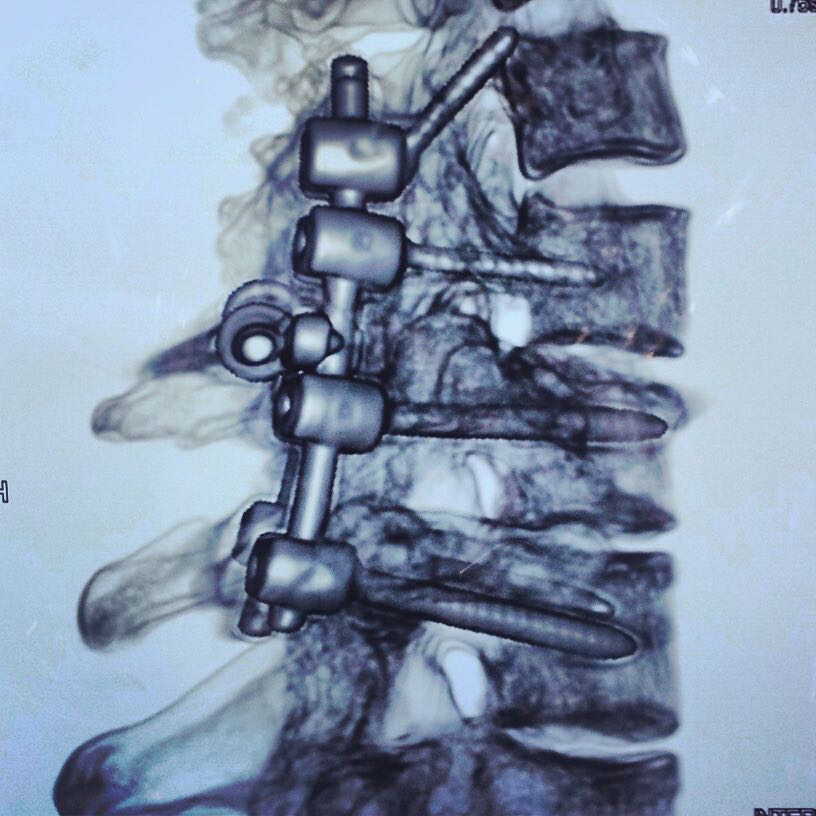 Three weeks before our ride with Toby Price, the doctors gave him the all-clear to get back on a bike and begin some easy trailriding. “I can actually get a clearance to start racing now as well!” Toby said with a grin on his face. “Going from being that close to living my life in a wheelchair, to now throwing my leg back over a bike, words cannot describe how that feels. The first time I got back on a bike I just rode up the road and back, I probably only travelled 50 metres, but that to me felt like I’d just accomplished the biggest task in the world!”

As for what the future for Toby Price and racing looks like, no one will know how much this accident has really impacted him until he lines up for his first race. He is without a doubt one of the greatest enduro talents this country has ever seen; to dominate enduro and desert in one year is no easy feat. He is excited at the prospect of racing again in 2014 and wants nothing more than to return to the top of the field.

“I’ll take on anything I can get my hands on next year; AORC, A4DE, Hattah, Finke, anything. When you’ve come that close to not being able to do any of those things again, you learn to grab everything with both hands. 2014 will be a big year, but we will just wait and see – we won’t know anything until I line-up for my first race.
“The doctors said I have as good a chance as anyone in surviving a crash, so that definitely won’t slow me down.”