I haven’t lived with a Yamaha for nearly a decade. The last long-termer I had from the bLU cRU was when I was a Staff Writer on this glorious magazine.

It was a 2010 Yamaha WR450F and it served me well for 12 tough months. But I think I’ve done things around the wrong way. You see, back then I weighed about 85kg, now my fighting weight is 98kg. Tipping the scales at more than 100kg kitted-up and piloting a Yamaha WR250F long-termer is not ideal.

At first, we had issues. I wanted more power and she wanted less weight. So, like all good relationships, we had to compromise, although I got the better deal. I lost two kilograms and the WR250F lost more with a full GYTR exhaust system. But our disputes didn’t stop there, I wanted her to be taller and she wanted me to be shorter, or at least more flexible.

Again, we compromised. She got a GYTR Tall Seat and I went to yoga. The last argument we had was over her nails. I like comfortable and durable levers while she likes economical ones but, more importantly, tougher hands at the controls.

I couldn’t do anything about my CTRL-ALT-DEL paws so this one was a one-way street and she reluctantly accepted a set of GYTR levers. Over the course of its 12-month stint with me that was all the WR250F needed. 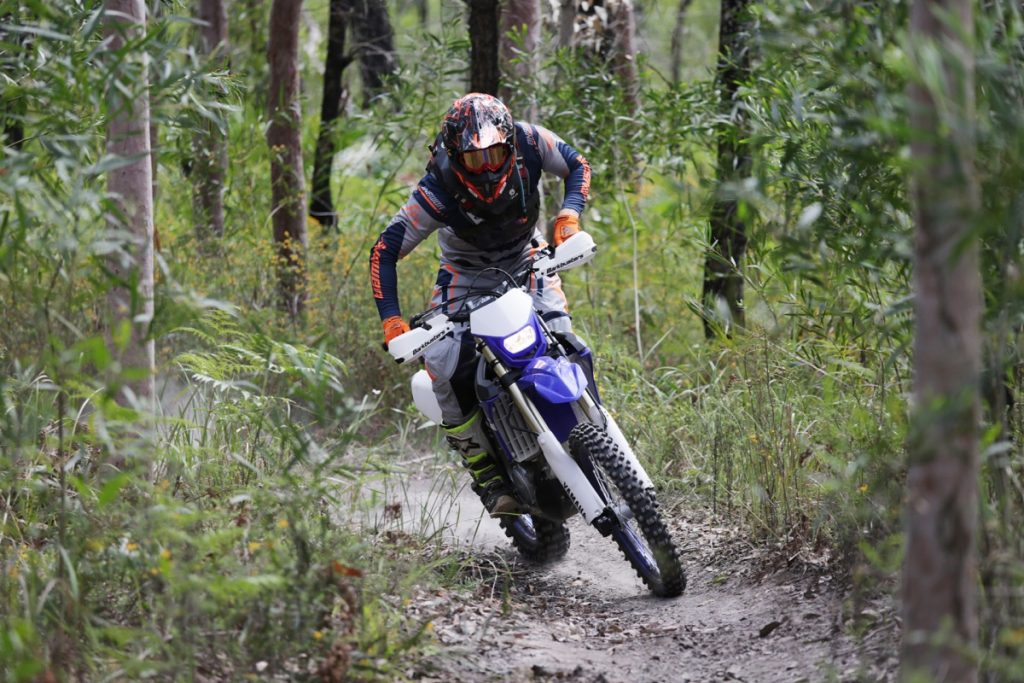 When I first got hold of the Yamaha WR250F I bolted up the M1 north of Sydney to Jeff Briggs’ joint and we headed out the back of his property for a ride in the Watagans State Forest. The smallest-capacity long-termer I’ve had in recent years was a Sherco 300SEF-R so I’ve sub-consciously tailored my riding style to suit bigger bikes. That meant lugging taller gears and leaving the clutch alone. But, after two hours behind the WR250F’s handlebar I was beginning to get frustrated. I don’t like revving bikes but without a fistful of throttle I struggled to maintain a consistent speed that would allow me to carry momentum.

I was so frustrated I decided to switch bikes with Briggsy, who was mounted on a 300cc two-stroke but prefers the more revvy, race-type engines. We continued on for about half an hour before Briggsy finally pulled up for a breather and said he loved the bike. I was confused and asked why he loved it so much and he explained that he prefers bikes that need to be revved. Briggsy was training for the Australian Four-Day Enduro so he had a loop setup in the bush that allowed him to sit down and ride the WR250F like a motocrosser through flowing singletrack. 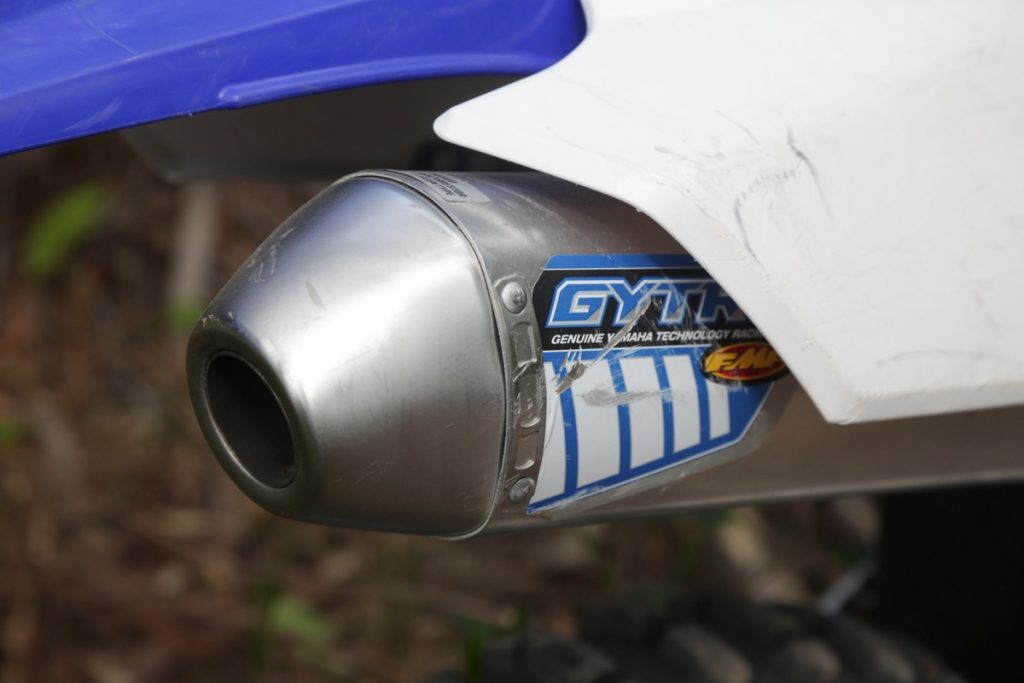 That isn’t my style. I’m not a fan of smashing out countless hours on a test loop going as fast as I can, I prefer an all-day trailride. But, Briggsy did have some good advice: he acknowledged it needed something to beef up the bottom-end and produce torque in every gear but he also suggested I except my fate and get used to revving it more.

I went back to the garage, hopped online and ordered the full GYTR header and muffler, which are made by FMF. While the wrap-around header is a pain in the arse to fit, it is a straight-forward job to replace the old pipe with the new. We couldn’t get the stock heat shields off the old pipe and the mounting clamps didn’t fit the circumference of the new pipe. I decided to push on without them and have not had any problems. 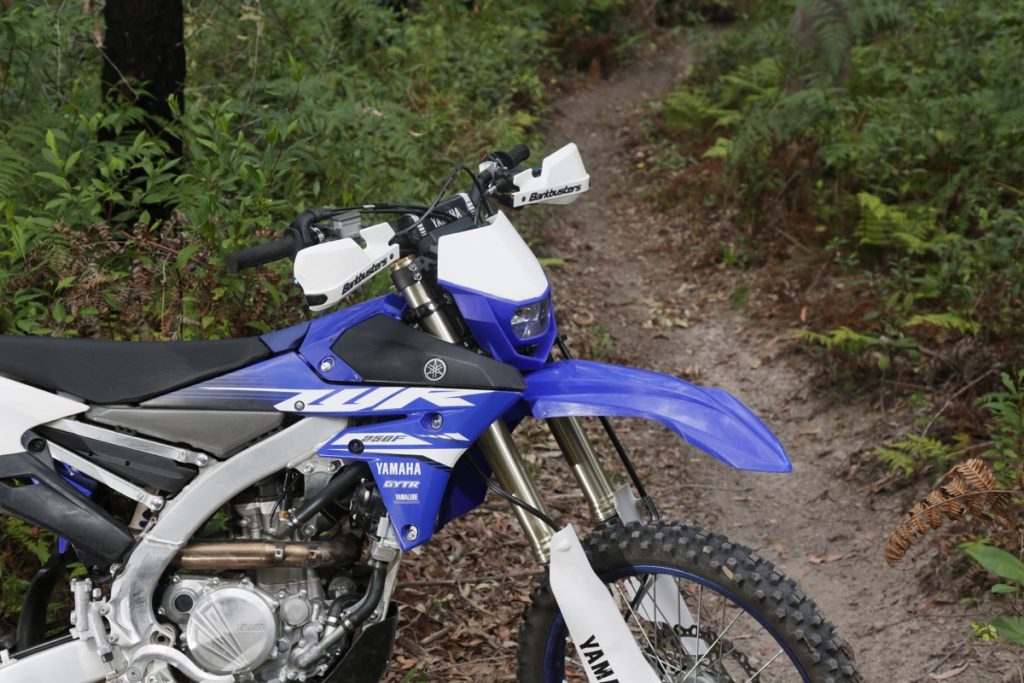 With the new pipe fitted, I hit the trails to see how much of a difference it had made. I was blown away! On smaller-capacity bikes, a performance pipe will make the biggest difference. I also swallowed some pride and altered my riding style to suit a smaller-capacity bike by leaning on the clutch a little more and ringing its neck. I was now able to loft the front wheel comfortably in second and third gear with decent throttle input and a little clutch help. I could lug up hills more easilyand change direction in tough situations with confidence knowing the bike had the emergency grunt to get the job done.

I also hit up Yamaha guru Darren Thompson for a map to use with the GYTR pipe. He obliged and it was as simple as plugging it into the Power Tuner and away I went. If you don’t have a Power Tuner just wait until the next time you’re at your local Yamaha workshop and ask if they can upload a map, providing they have the tool (see inset shot for map).

After taking care of the power I moved on to the riding position. The distance between the top of the seat and the footpegs is short and as I’m 188cm I needed more room. So I enlisted the help of the GYTR Tall Seat. The bike’s booty perch grew by 2.5cm, which helped reduce the cramped feel of the cockpit. While it wasn’t colour coded and looked a little ugly, seeing as it was black with no matching blue stripe, it had plenty of other benefits. 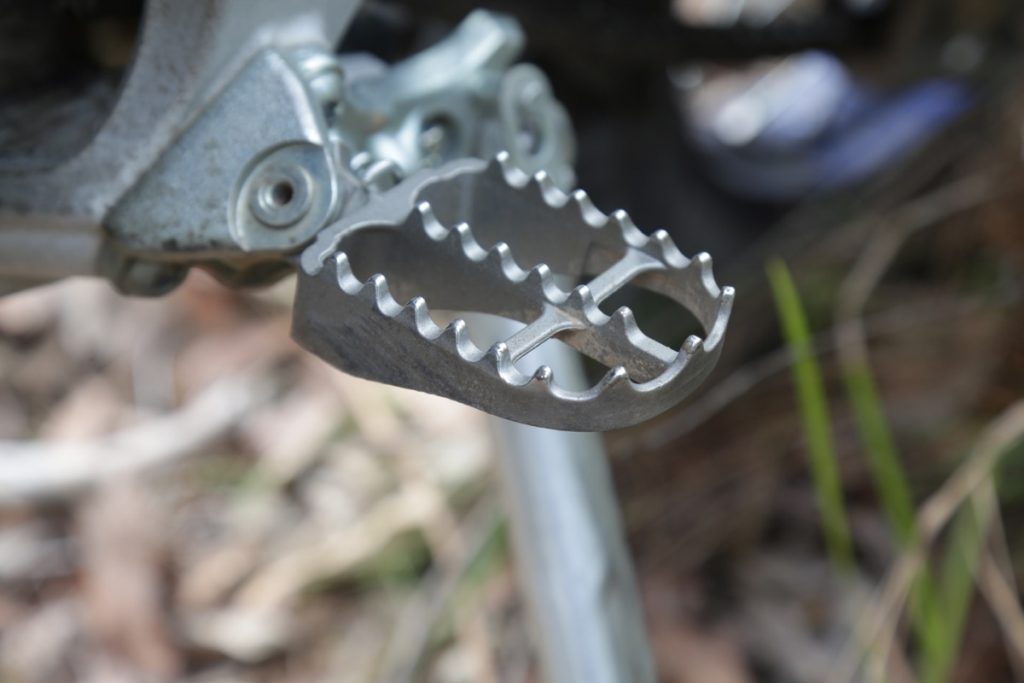 Short-arse Ben Grabham loved the seat because it added a little extra padding and also helped him get further forward on the bike because it wasn’t scalloped like the old one. ADB Tech Editor Mat Boyd liked it because it held him in place better while cornering because it was flat and didn’t slope towards the rear of the bike. As innocuous as the tall seat seemed when I ordered it, it actually turned out to provide many benefits.

If you’re a regular reader of ADB you may be thinking that what I’ve done goes against everything I’ve ever said. Nowadays bikes come with plenty of power and punters that bolt on pipes do so because they sound or look better. Typically, I suggest most riders have their suspension tuned first.

But, the Yamaha WR250F runs the YZ-F motocross suspension that’s been tailored for the bush which means it is already firm. And at my weight it never felt under-sprung. When traversing rough fireroads to get from one line of single to another it did have a tendency to feel a little harsh over loose rocks but when hammering at speed into tree roots, whoops and logs it was excellent! I had no need to change anything on the suspension.

As for maintenance, the Yamaha WR250F was an easy bike to live with. I’ve changed the oil every four or five rides, replaced the oil filter every 10 and cleaned the air filter every second ride. 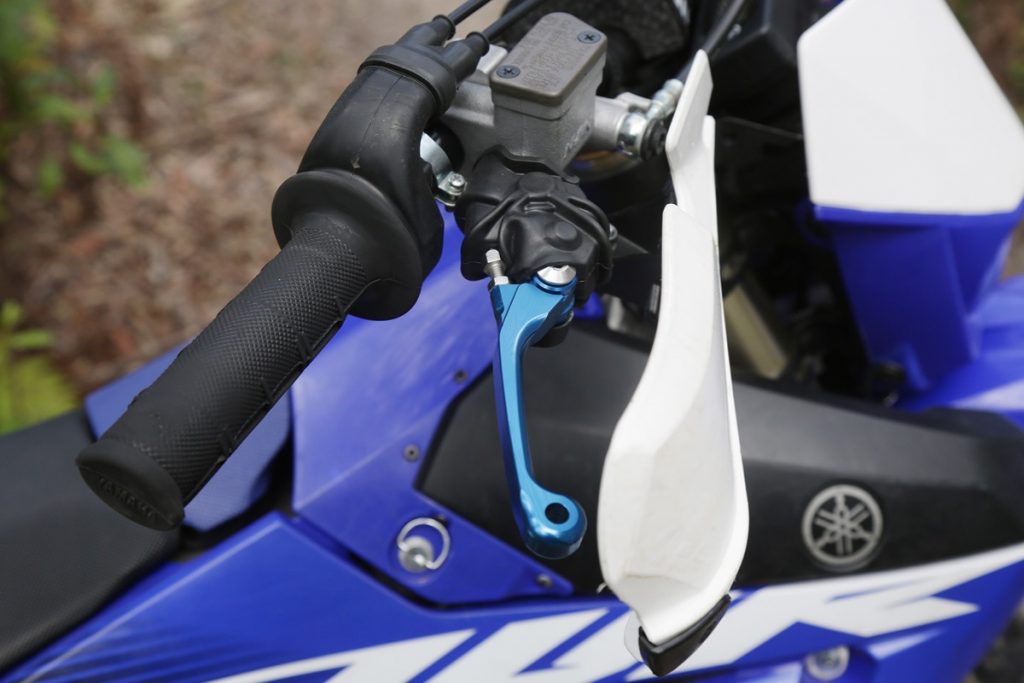 This may not seem regular enough but when you ride every week, like we do on ADB, this means you’re changing the oil once a month, changing the oil filter every three months, and the air filter once a fortnight. I have not needed to adjust the valves, replace the piston or swap a single gasket. Unlike some long-termers that have required the odd part to keep things running smoothly, I haven’t ordered anything other than performance parts.

It amazed me how reliable the Yamaha was and how little went wrong which would have needed fixing. It never boiled because it had a thermo fan, the handlebar was fine because it was a solid tapered Renthal number, the motor and fork legs never leaked and, as you can see in the inset shots, this machine is still on the original chain and sprockets!

It is for this reason I would suggest the Yamaha WR250F to anyone who is slack with their maintenance.

It’s a very easy bike to live with because it requires very little attention. Also, it would suit a smaller rider, preferably someone under 85kg but if you’re willing to spend the extra coin to improve the ponies and raise the seat than it will suffice for units my size as well. It works as a trailbike and as a race bike so either, or both, will be doable on the WR250F.

Performance and race-bred luxuries are always desirable attributes for any serious dirtbike rider but reliability should be your primary concern. 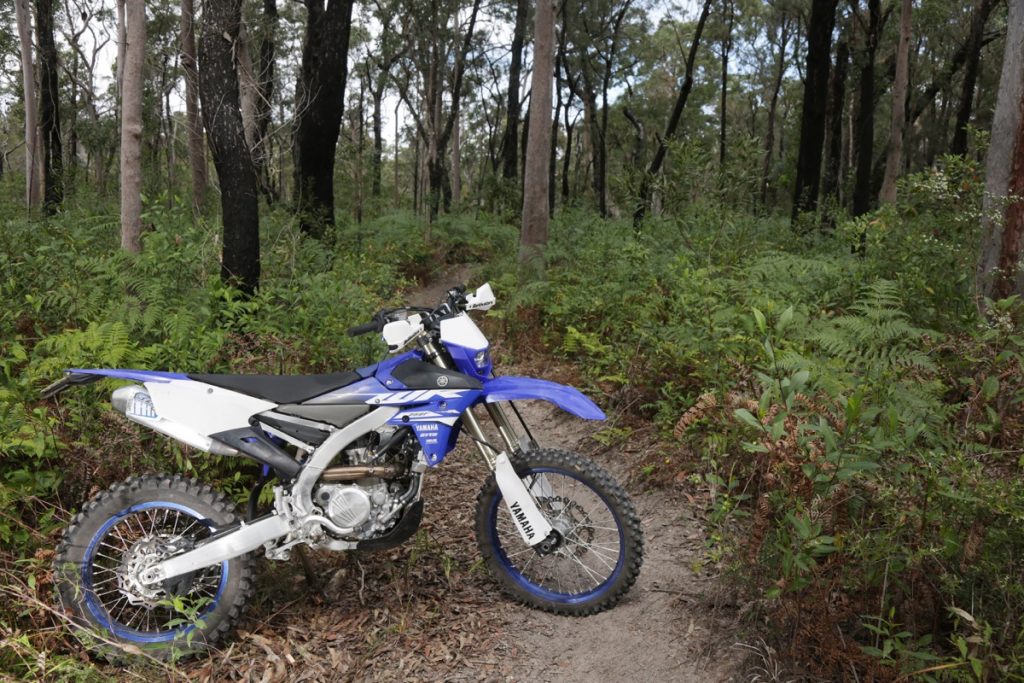 Here’s what I ploughed through over 12 months
• 12 litres of oil
• Four oil filters
• Three air filters (the airbox on the WR250F is up high so the filters do not get very dusty)
• Three sets of tyres (Dunlop MX52, Pirelli MX Extra-X and Metzeler MC360)