So you're a two-stroke fan but can't decide which one rings your bell? Well we've done the job for you and pitted a 250 and 300 two-stroke against each other.

For years, dirtbikers have been led to believe the bigger the bike the better the rider. We thought machines like Yamaha’s IT490 and SC500, Honda’s CR500 or Kawasaki’s KX500 were only tamed by experienced and talented pilots. This attitude has continued into the modern era, with many riders thinking a 300cc two-stroke is too much kanakas for them and, instead, settling for the traditional 250cc. However, as Lindsay Bond and Ben “The Butcher” Greenwood from KTM Trail Tours and Cam Kenny (son of Brett Kenny, ADB tester not 1980s rugby league star) and I found, which bike is best for you is actually not always that obvious.

First up, I’m going to skip straight to the best part and tell you the verdict. If you’re a little on the unfit side, or maybe not the “racer boy” you once were, than the 300cc two-stroke machine would be the one for you. If you’re fast and aggressive, and know your way around a bike like Bondy does, then we urge you to consider the 250. Seems kinda odd doesn’t it, telling the less experienced, less confident, more unfit rider to jump on a 300cc two-stroke and the better, faster rider to swing off the 250? Well here’s our reasoning. 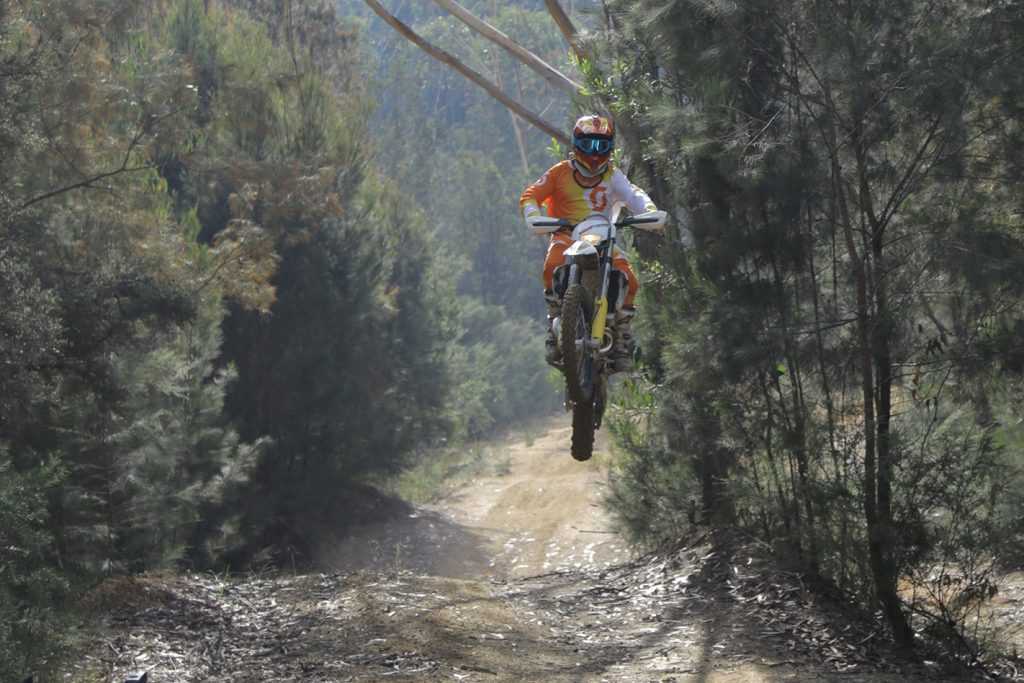 After a hard two-day trailride with the mob from KTM Trail Tours, our minds were made up. We put the Huskies through a world of pain, which included long, steep hillclimbs (one of which was Pork Chop Hill on the NSW south coast), tight singletrail, open fire roads and even a bush motocross track. But this test isn’t about the Husqvarna’s, it’s a comparo between the two capacities.

The 300 produced so much torque off the bottom, a deaf man could be forgiven for thinking he was riding a four-stroke. This extra torque is produced by a bigger bore (5.6mm increase from the 250cc machine), which actually makes the bike easier to ride. Being able to leave the bike in a single gear and clutch your way through the bush is much easier than bashing though the gears trying to maintain enough grunt to get you out of trouble at a moment’s notice. However, the bigger capacity bike was not as nimble as the 250.

Even though there’s a bee’s dick in it on the scales, the 250cc actually felt far more agile. This could have a lot to do with the ol’ inertia trick. It seems the bigger the capacity the greater the inertia or the harder it is to stop and turn a moving object, despite the minimal weight gain as you go up in capacity. The 300 also allows a rider to sit down and, without any clutch, paddle uphill without stalling. This is particularly handy when you’re at the end of a long ride and the legs aren’t working as good as they were when you first hopped on.

The 250 is a completely different beast. Despite only being down 50cc, the transformation in engine performance is night and day. Again, it all comes down to torque. At 100kg with gear, and 190cm tall, if I selected the wrong gear on the 250 when entering and exiting corners, or climbing hills without a run-up, I often found myself needing to fan the clutch to prevent the bike from bogging. 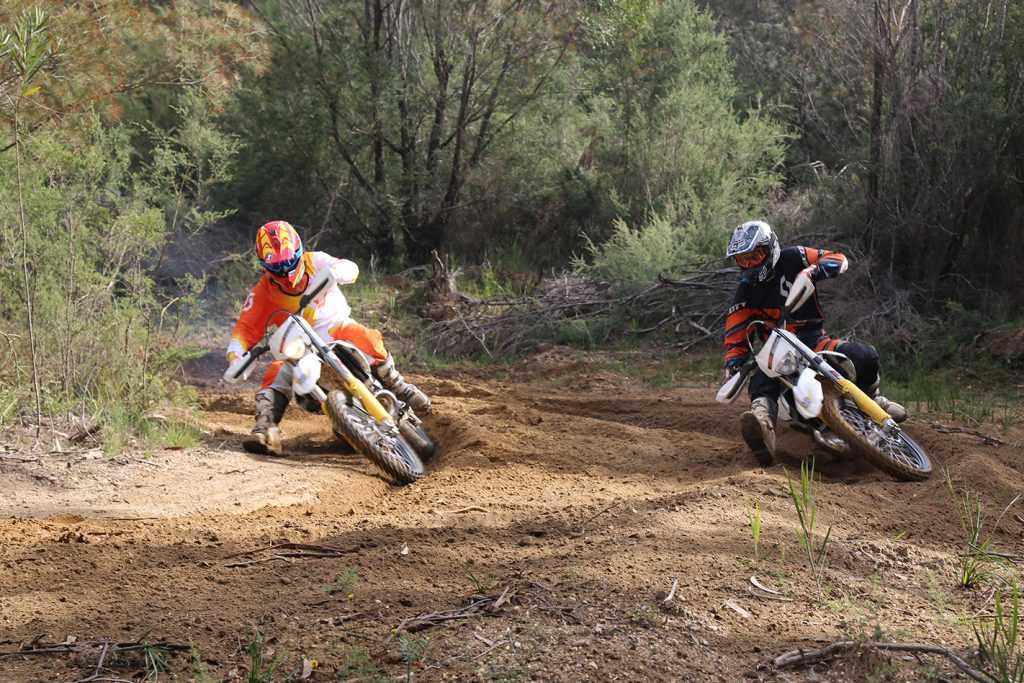 This is a lot to think about if you’re at the end of a KTM Trail Tours Seven Deadly Sins initiation or riding with a dreaded hangover (which I’m sure we’ve all done at some stage). Having torque on tap makes the going easy. That being said, if you want to race all day and ride standing up and on the pipe, don’t let your ego tell you the 300 will make you faster. It won’t. We were all quicker on the 250 when the track flattened out and the pace picked up. With no hills but tight corners and tight singletrack, the 250 is a lot easier to navigate through the scrub. Providing you keep the revs up, and your concentration! Sure the 300 can be raced by experienced competitors who know how to pilot a bike fast through the bush. But I believe there are only a handful of riders in this country who can actually stretch the legs of a 300cc two-stroke in the bush.

Most of us will never have the 300 singing through the tight singey. Therefore, as a general rule, I would recommend the 300cc two-stroke to the majority of trail riders out there. It is easier to ride than the 250 and unless you have the ability to get it to the peaky part of the power (before coming off), you will not find it too much of a handful. If you’re a trail rider who likes to race as well, then run the 250cc, hanging onto a 300cc two-stroke while trying to keep your race face on is a challenge I personally would not like to try. Mitch Lees 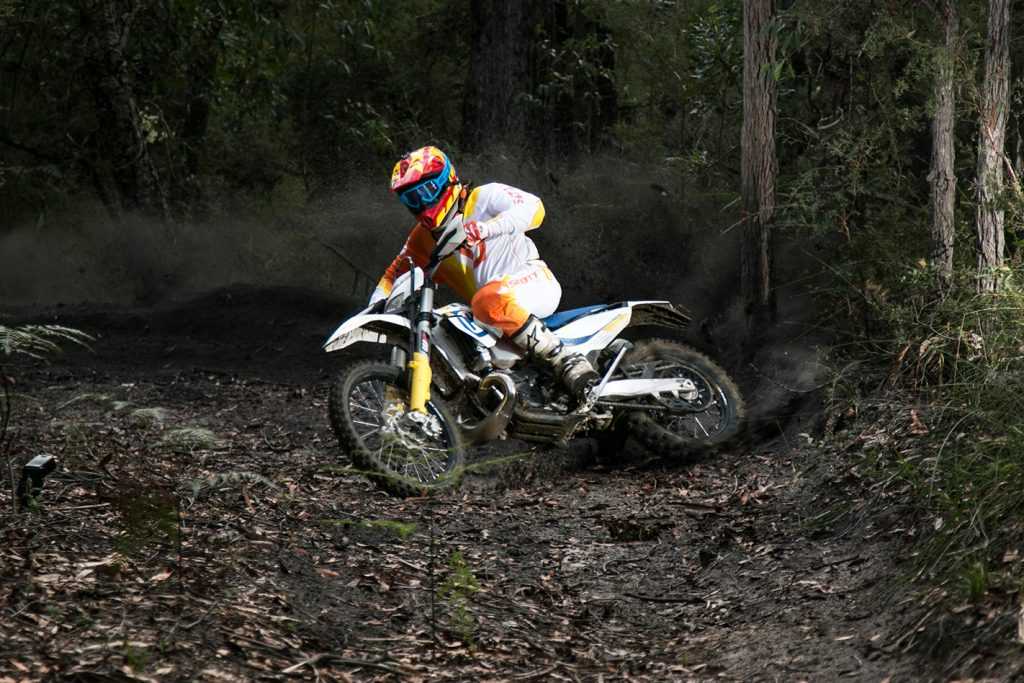