KTM throws out its tried and tested EXC range and startsover.

The launch of the 2017 KTM EXC range has been one of the most hotly anticipated events in recent memory. Murmurs about all-new KTMs have been all over the web in the last few months but, for those of us in the industry, this model has been hot goss since the international launch of the MY15 models in 2014. It was at that launch that KTM eluded to a monstrous overhaul in 2017, saying that emissions laws would force the changes. Unfortunately, it looks like the massive changes we were expecting, including fuel injection on the two-strokes and air forks on everything, have not eventuated for the MY17 range, despite the looming Euro 4 rules. 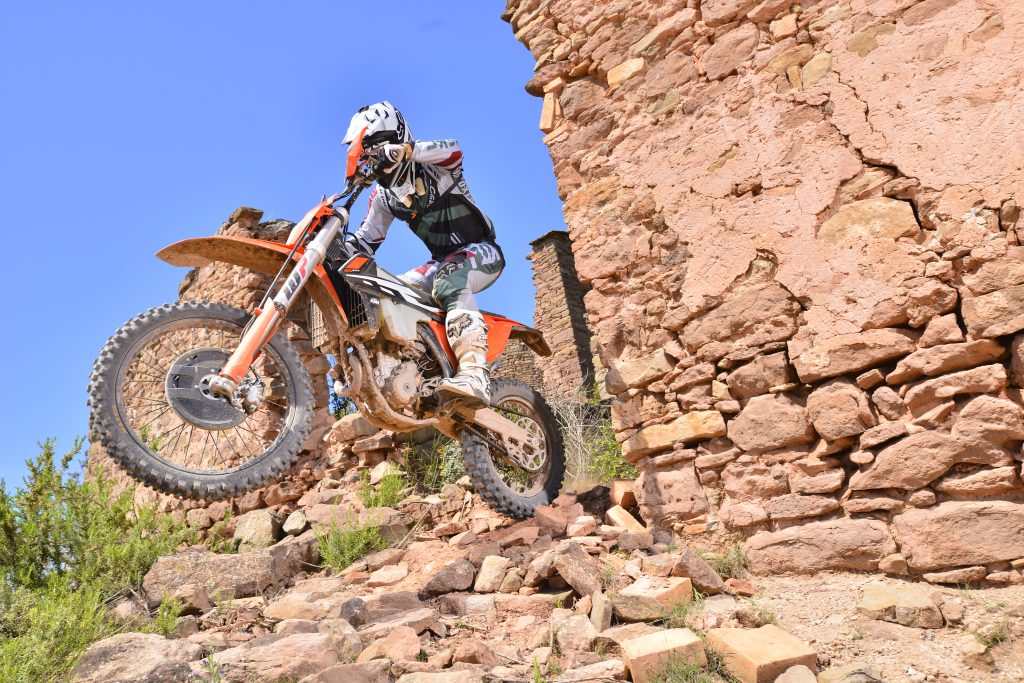 NEW CHASSIS: The whole EXC range receives a new frame that KTM claims has 20% more torsional stiffness, 30% less longitudinal stiffness and a slight reduction in weight (about 350g). The bikes get enduro-specific cylinder head braces aimed at reducing vibration and improving handling in the bush. The subframe is about 200g lighter and KTM has opted to stick with the  steel chassis. There’s still no linkage but KTM has shaved 220g of the cast aluminium swing arm.

UN-FORKEN BELIEVABLE:  KTM has avoided the air fork movement and instead, KTM has bolted up the WP XPlor 48. The XPlor runs springs in both legs but each leg controls separate damping functions, with compression on the left and rebound on the right. Adjustment is easy thanks to dials on top of the fork legs (plus a preload adjuster on the Six Days models). The XPlor fork still has 300mm travel but KTM claims it is 200g lighter than the 2016 model.

THE POWERPLANTS: Both the two- and four-stroke engines have had a complete overhaul, but the two-strokes don’t have the fuel injection we were expecting. Instead the mighty 250 and 300cc strokers get a new cylinder and twin, adjustable power-valves, internal shaft layout, underslung electric starter, gearlever, counter balancer and new Mikuni carburettor. The 2T engine mods have drastically reduced vibration through the handlebar and footpegs and the Mikuni carby is far less sensitive to elevation and environment changes.

BETTER AIRBOX, LIGHTER BATTERY: A new airbox can be found on all models, with the R&D team focusing on the inlet snorkel to improve performance. A new filter support system makes it easier to hold the filter on the cage when reinstalling it after a clean. As for the battery, KTM has opted for the trendy lithium-ion batteries, saving nearly 1kg. 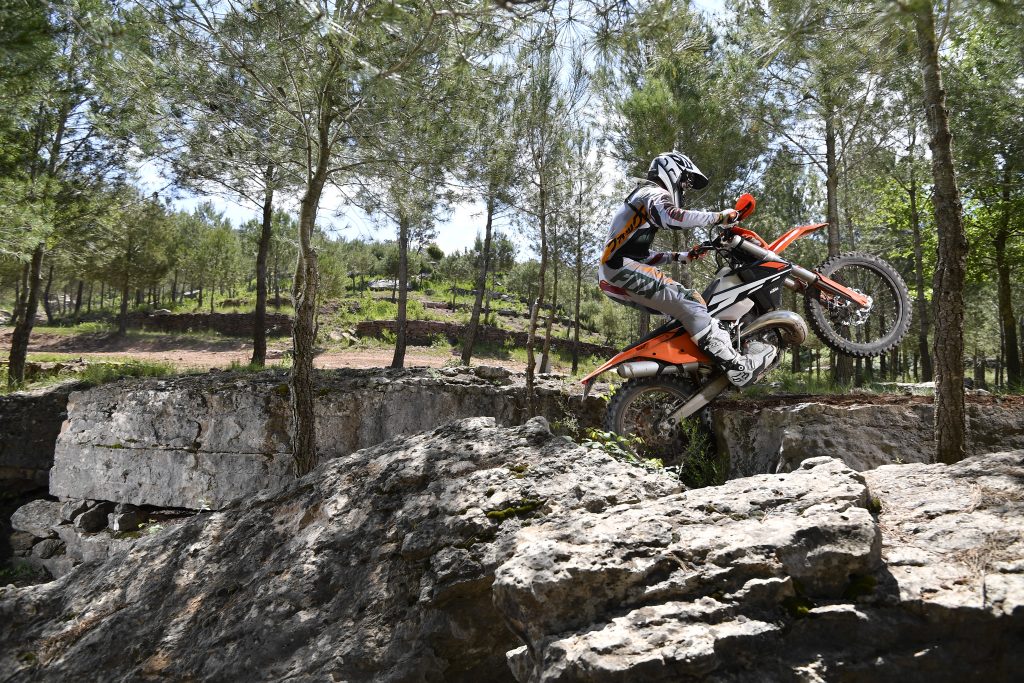 MORE INTELLIGENT BIKE The new 4T EXCs have a far more intelligent Keihin ECU and a gear sensor for gear-selective maps. The improved ECU also has the option of traction control, which reduces power to the rear wheel very slightly to ensure there’s minimal wheelspin at all times.

HOLD YOUR HORSES: KTM has increased the length of the brake pedal, redesigned the rear caliper with smaller pistons, reduced weight with new discs from Galfer and incorporated the electronic speedo cable into the front brake line. The rear brake produces an impressive increase in feel, despite appearing to be a minor change.

NO APPEARANCE, YOUR WORSHIP

SHOCK LINKAGE For years KTM has persisted with PDS and, personally, I’m a fan. I’ve never really noticed a lack of traction, even when ploughing through braking bumps and it also reduces the possibility of a linkage failure when you smash into a rock.

KICKSTARTER: When we learnt that KTM was not only removing the kickstarter but also running a lithium battery I was a little concerned. In the eight hours of testing we got done at the launch, I had no problems with the electric start, but that’s to be expected. We are keen to see how this set up goes long-term.

2T INJECTION KTM has elected not to fit its two-strokes with fuel injection. With Euro 3 emission laws still in place, KTM was able to avoid releasing the costly EFI and may have solved some fuelling problems by fitting the Mikuni.