The Honda Team riders shone as the first full stage of the Andalucia Rally got underway. Kevin Benavides and Joan Barreda scooped the top positions after completing the day’s two timed-sections, which played out over wide open routes and tracks. Both riders aboard the Honda CRF450 RALLYs were able to grab the two leading positions on the day, as well as in the overall standings of the rally.

Today’s starting order proved a positive one for both riders, who were able to make up ground on the riders who had finished faster yesterday. In spite of some technical issues, Kevin Benavides held an infernal pace to take the win ahead of his Honda Team squad-mate Joan Barreda. The Argentine’s win on the day sees him take the overall leadership with a 3’15-advantage over the Spaniard.

Team-mates Ricky Brabec and Nacho Cornejo, not used to the Andalucian slopes, were finding it difficult to keep the pace set by Kevin and Joan, conceding several minutes in the process. The pair hold ninth and tenth in the general standings after stage one.

The second stage of the Andalucia Rally will take place tomorrow, Thursday, with two 140-kilometre and 130-kilometre timed-stages plus a 95-kilometre liaison section. The second special of tomorrow’s stage two will cover the same route as today’s. 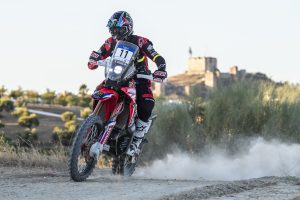 Kevin Benavides: “The day has been a positive one. Today I felt good from the beginning … everything was going well … until just before the neutralization my roadbook broke and the paper came loose and I wasn’t able to move it. I tried to fix it in the neutralization, but it wasn’t possible so for the remaining 110 kilometres I had to follow the tracks. It was hard to focus, with a few scares, but it turned out well in the end. I saw my brother on the ground, who had fallen, but I think he’s okay, which is the important thing.”

Joan Barreda: “Today was a good stage after yesterday’s, we have seen a lot of fast riders in this rally. Today was important to have a first stage without making any navigation errors. In the first part there was practically no navigation, but as the kilometres passed there were more open areas where I was able to pick up the pace. There were some complicated parts, which we had to really pay attention to. Maybe I’ve dropped a bit of time there, but I think it was a good stage overall.”

Ricky Brabec: “The first special was tough. These guys out here on these roads are so fast. I don’t have the skills to be riding fast on these roads. It was a fun day overall. I’m glad to be at the finish and not in a ditch or sitting against a tree right now. I’m looking forward to the next few days. We are going to change up our tyre combination. Today we had the wrong combo. It was really slippery out there. Now we are going to get ready for tomorrow.”

José Ignacio Cornejo: “I am learning about how to go fast on these roads, which I am not very used to, but I hope to improve. Kevin was very strong today. I’m going to try to cut down the distances with the frontrunners, and try and figure out how to get faster on these road tracks. I think I didn’t do too badly today in an entertaining stage with quite a bit of dust in some parts. Let’s try to enjoy the remaining days.”