Located in the Northern Territory, the Tanami Desert is considered the final frontier by many adventurers.

It is a large stretch of mostly rocky terrain with the odd hill that covers nearly 260,000 square kilometres and is traversed by the Tanami Track, of which less than 20% is bitumen. So it seems appropriate that Suzuki faced-off against the increasing competition with an up-spec DR650SE called the Tanami Edition.

It came fitted with a 20-litre Acerbis polyurethane fuel tank, Pirelli MT21 Rallycross tyres, an alloy bashplate (made by Force), Barkbuster VPS handguards for the rocks and slippery hills and Suzuki carrier. But the best part was the bike was just $9490 rideaway. That’s over $1200 worth of gear for free.

Not surprisingly, they sold out before we could even get this test into print! After getting the opportunity to test one of the last units it was clear why they were so popular. Where else can you get that sort of value? So, if you’re still in the market for a budget adventurer and you find one in the classifieds, here’s how it stacks up: 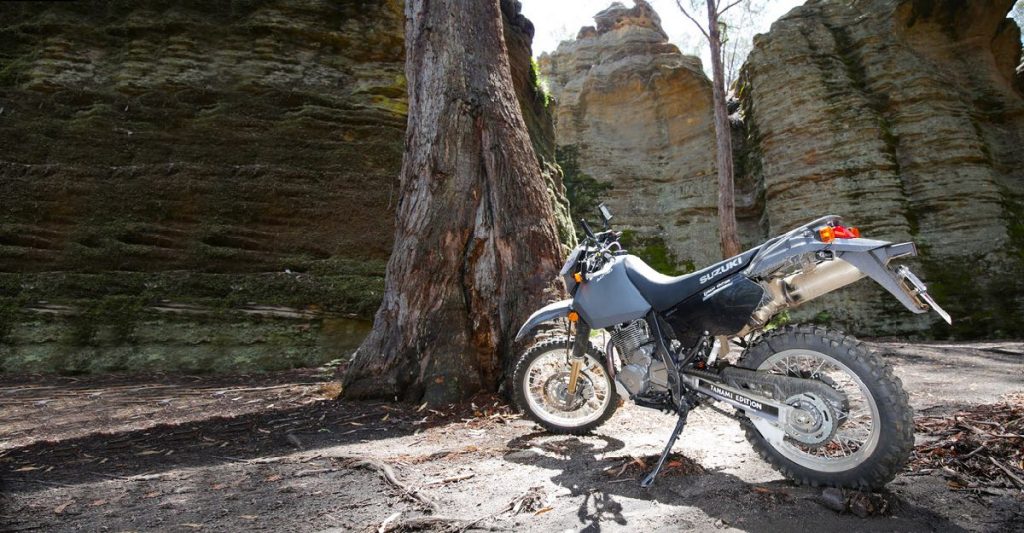 HOW DOES THE DR650SE TANAMI GO?

The rest of the bike is a standard DR650SE so it’s soft and mellow. Suzuki doesn’t shy away from the performance of the DR650SE, claiming it produces its best power in the low-to-mid range. They’re aware it’s not a top-end screamer or power-crazed trench digger, instead it’s a reliable, LAMS-approved, do-anything single cylinder, oil-cooled kilometre cruncher. The Tanami Edition still runs the Suzuki Composite Electrochemical Material- coated bore for durability, weight reduction and heat transfer, CDI ignition system, 40mm Mikuni carburettor and five-speed gearbox so don’t expect anything special in engine performance.

But, the Acerbis tank made a massive difference to the distance we could cover without hurting performance. We racked up over 264.4km from 15.2 litres before hitting the reserve tap, which would suggest we could get 350-400km. The riding we were doing was a combination of highway, fire roads and singletrack out of Sydney and through the Blue Mountains.

It would equate to your typical weekend ride out of any of the major cities around Australia. The bigger tank didn’t flatten the power and the bottom-end grunt wasn’t effected. The top of the tank is wider than the stock unit so you’re going to find it harder to get your crutch over the front if you sit down in the tight stuff but it’s plastic, so it’s not as easy to ding when you tip over and has some give if you come down hard on it after launching off erosion mounds.

It would have been nice to see Suzuki include an aftermarket pipe to broaden the overall power and possibly some alternative gearing if you wanted to trailride it for a day. But maybe that will be on the Simpson Edition (joke, although a Simpson Edition would be cool!) 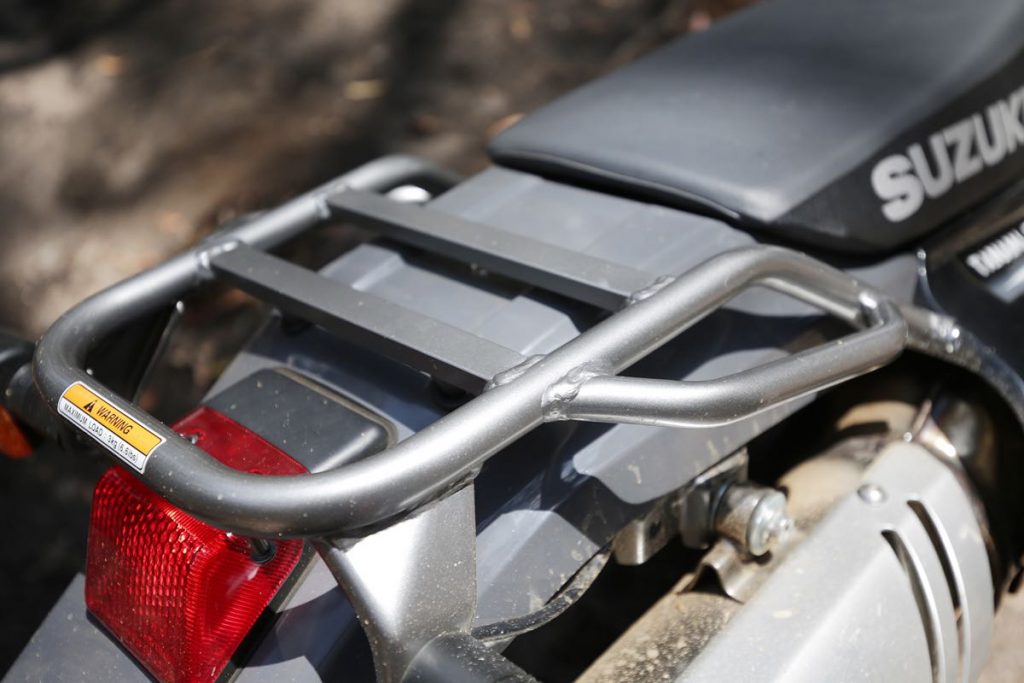 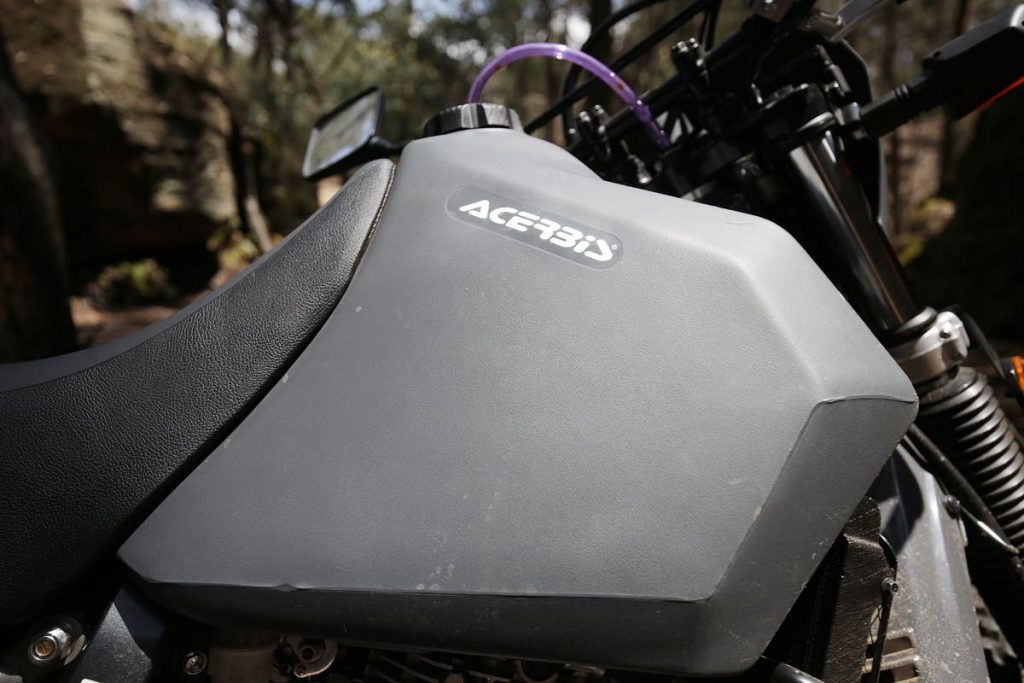 At least they fitted a set of Pirelli off-road knobs which provide way more traction in the dirt than the dual purpose tyres the DR650SE comes with. You can charge into sandy, dry and skatey corners, push the inside knobs into the dirt and know the tyres will hold you firm without low-siding. Same goes for the rear when climbing hills fully-loaded. The knobs are aggressive and eat into the dirt like they’ve found a Maccas after 40 days in the Tanami. The downside is that, because the Rallycross tyres are like full-blown knobbies, they get eaten alive on long bitumen transports so you might go looking for a set of the standard tyres or second-hand spare wheels.

The suspension is the same as on the standard DR650SE with a conventional, telescopic fork and monoshock. It’s soft and forgiving over all the rough stuff but will need beefing up if you plan on loading up and crossing the Tanami with plenty of gear (see breakout, right). The suspension sat a little lower in the stroke with seven extra litres on board (the standard tank is 13) but we didn’t find that effected performance all that much. The DR650SE isn’t known for its stiff, aggressive suspension so a few extra kilos doesn’t make a difference.

While the Acerbis tank and Pirellis were the big bonus for the Tanami Edition, the defence gear’s worthwhile. The standard DR650SE doesn’t come with handguards so when you drop it (not if) you’re likely to lose a lever. Fortunately Suzuki levers are cheap, so replacing them is no big deal but it’s more of a hassle than it’s worth. I understand most people wouldn’t attack a route like the Tanami Track without handguards but the Barkbuster VPS units on the Tanami Suzuki meant one less thing I had to think about and a few less spares you would have to take with you.

The bashplate and carrier might not be as exciting but they are still handy accessories. Not many people are going to be skulldragging the DR over rocks and logs and holing engine cases or denting frames but knowing you aren’t going to lose your oil in the middle of nowhere is comforting. It makes a bit of noise when pebbles fly up and bounce off the ’plate and, in the wet, mud gets caught inside it, but these are minor issues. Suzuki is currently offering the 650 with the last three accessories as part of a dealer-fitted “Adventure Kit” at $9490 rideaway and that’s still pretty good value. 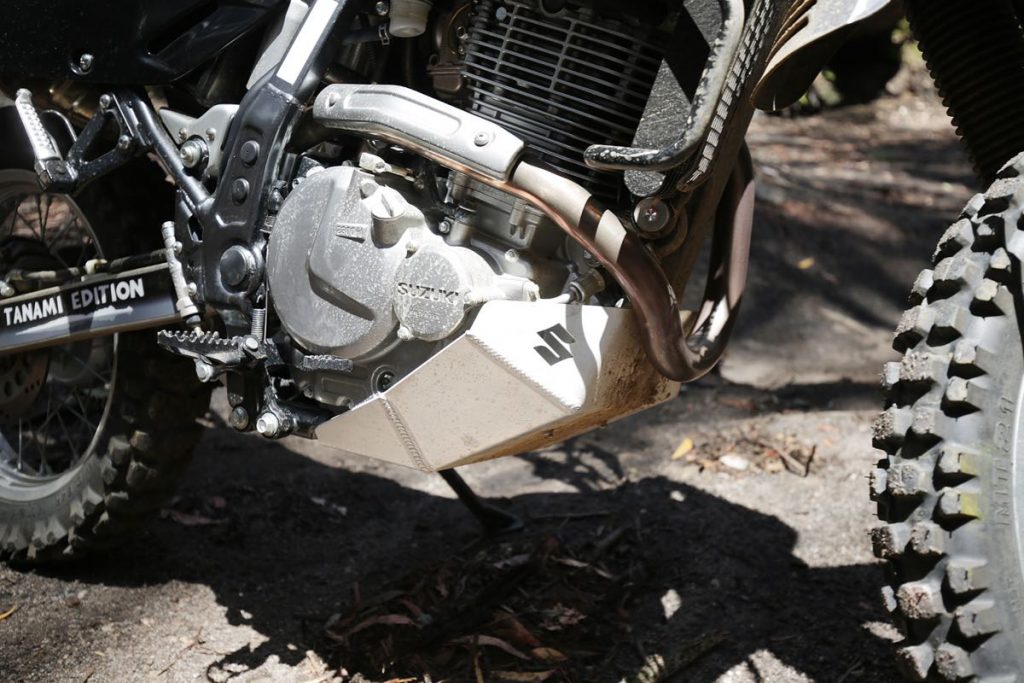 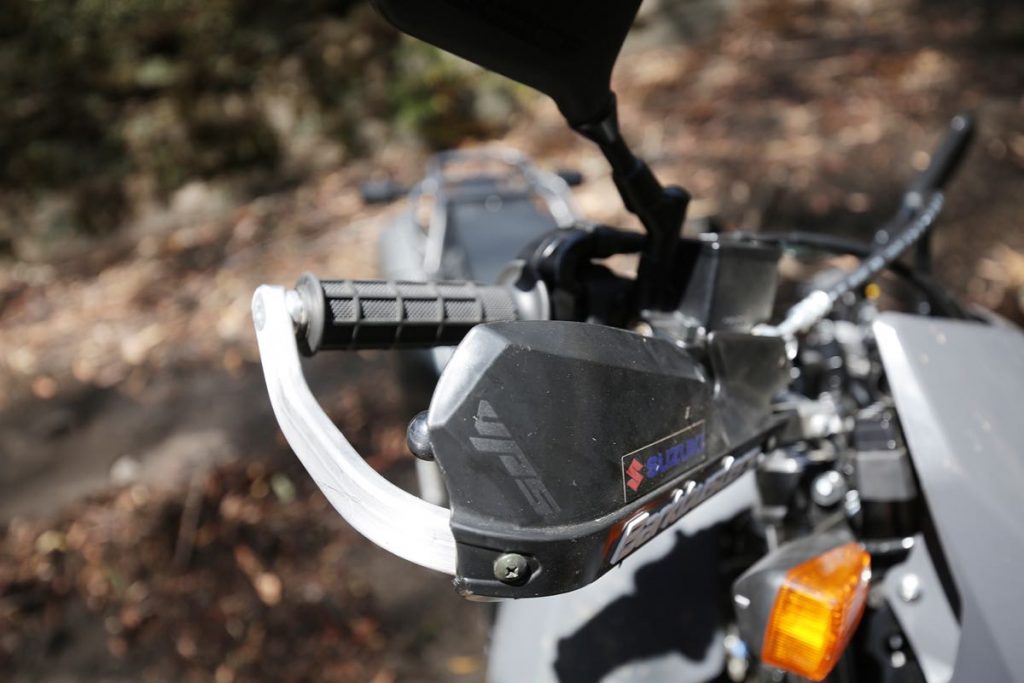 But Marty and Vince, who rode one of the first DR650s to land here in the Safari way back in 1997, also modified their suspension, added windscreens, changed the sprockets and chains, bolted on luggage racks, bolted on pipes, beefed up the brakes and a lot more.
Marty’s now up to DR #4 and, after harassing Vince for years, managed to extract one of the factory Ohlins shocks the team used in that Safari 23 years ago. The catch was Marty needed to beef up the fork to suit. Vince Strang Motorcycles has tried many mods on DR650 forks and strongly recommends Australian-designed Plex valves that work in both compression and rebound.

The fork was removed at VSM and drained of oil. For Plex valves they recommend going one step lighter on the springs to suit your weight and riding style, in Marty Hardcore’s case that was .54s. The Plex valves, with shims top and bottom, simply sit under the springs with the preload spacers shortened to allow for the height of the Plex valves and can be re-shimmed to suit specific customers.

The custom Ohlins shock was then bolted in with its remote reservoir to keep the shock oil cool and away from the exhaust. Marty says the fork worked superbly, made erosion mounds a joy and still picked up all the little rain ruts nicely, even the small bumps on tar backroads disappeared.

It’s crazy to think that, not so long ago, the 450cc enduros were at the top of the food chain in the enduro world.

Before CV-19 and social distancing, we took our little nippers to a dusty private motocross track in Mandalong, NSW, to let them loose on the KTM 65 SX Husqvarna TC 65 and Yamaha YZ65. It seems the further we get down the capacity ladder the fewer brands we have to test, and s