Looking for an exotic entry-level dirtbike with a low seat? Look no further than the AJP PR3 MX Pro.

After banging my knees on the handlebar and getting RSI in my wrists, I paused to wonder who the AJP PR3 MX Pro would suit. I’d just spent the best part of a day thrashing the air-cooled 233cc Portuguese purist through a private forest and it was clear this AJP was not the right bike for me.

It was underpowered, under-sprung and physically too small so I enlisted the services of Andrew Kisbalazs and Paul Ellis as testers. The PR3 MX Pro competes with the Yamaha TT-R230 and Honda CRF230F for your bucks and it’s on a par with them in both performance and price.

The AJP PR3 MX Pro is an excellent learner’s bike, designed to be ridden on private property or around a gentle motocross track. It’s great for a beginner because it has a low seat that just scrapes the measuring tape at 840mm, an easy to maintain and use air-cooled 233cc engine and an electric leg.

DISTINGUISHING FEATURES
The PR3 MX Pro is touted by many pundits as an inexpensive European enduro bike. While it may be European, it is actually not that much less in price than the TT-R230 and CRF230F here (about $200-$300 less). So what do you get on the AJP that you don’t on its Japanese rivals?
You get those sexy exotic European features like a translucent fuel tank, tapered swingarm, AJP brakes, aggressive footpegs, a fuel tank cap in the rear and a set of black rims. This is the equivalent of a Mediterranean tan, G-string bikini and dark Portuguese features. You get my drift. 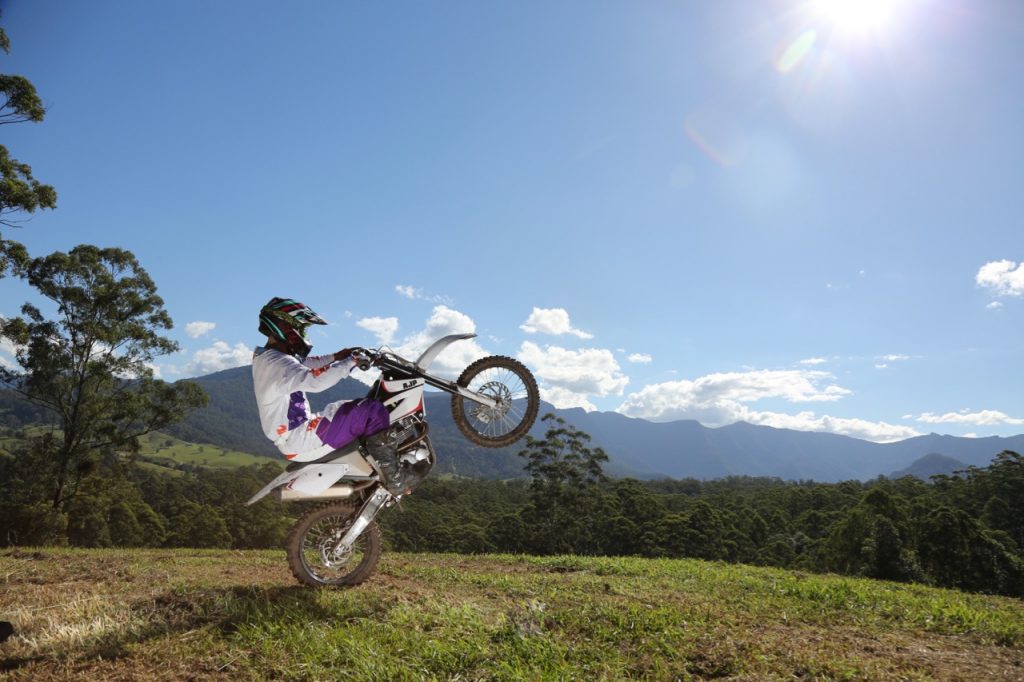 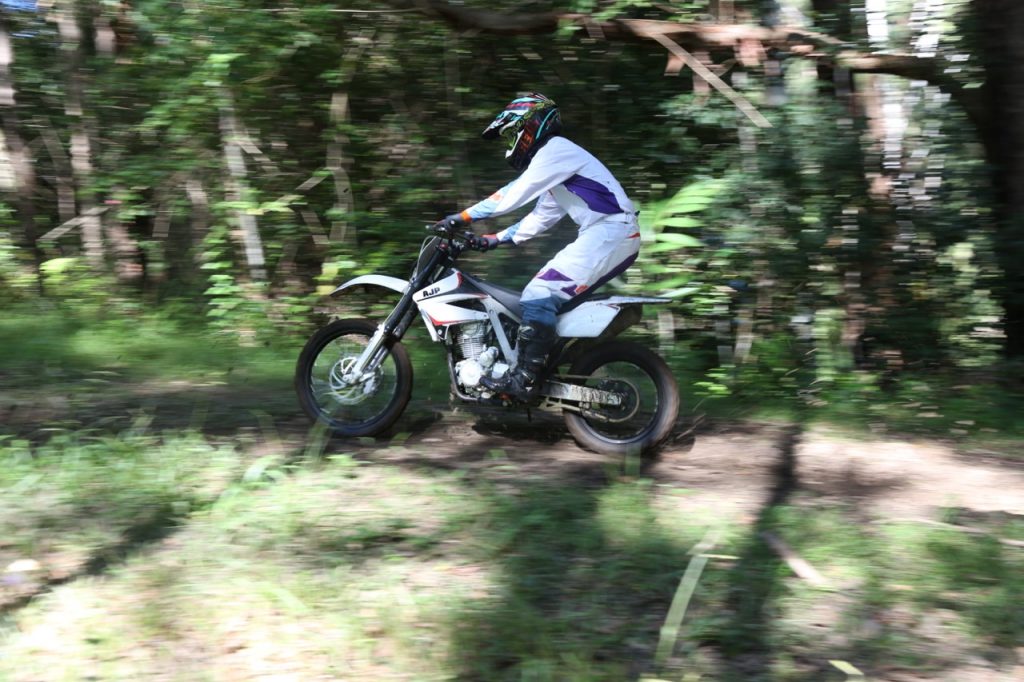 The AJP PR3 MX range comes in two capacities: 124 and 233, both four-strokes with an incredibly linear power curve. And with 89kg of centralised mass, the PR3 doesn’t necessarily need all the power in the world because it’s not moving much weight. Kinda like a Lotus Elise, only not.

The power is easy to use, so beginners who are a little twitchy with their throttle wrist can feel comfortable swinging off the right grip.

Another standout feature is the suspension. The Marzocchi gear is not something you’d expect to find on a bike a little over $5000, but it’s there and is considerably better than its Japanese counterparts. It has a 38mm fully adjustable fork with 240mm of travel. My bucket arse was able to bottom the fork and shock, but Andrew and Paul didn’t have that problem.

The action is predictable and plush and for a beginner who probably couldn’t tell the difference between a pogo stick and a fork leg, it will be just fine. While Marzocchi isn’t the best fork money can buy on a full size dirtbike, it is awesome for something at this price point.

The absence of a kickstarter is a concern for most established dirtbike riders. However, when you consider what kind of rider this bike is designed for, the manual leg is redundant. There’s nothing worse than having to kickstart a bike for your kid every time they stall it and on the day we tested the PR3, the electric leg was flawless.

When starting out on a dirtbike it’s just as important to learn how to care for your bike as it is to learn how to ride it, and air filter maintenance is the first thing everyone should learn how to do. The AJP PR3 makes this easy, thanks to an accessible air filter under the seat. It’s a Twin Air, so you know your precious engine internals will be safe from all the nasty stuff that can sneak in.

Oh and the clear tank is grouse. For beginners who want to ride all day it’s handy to be able to check the fuel level before it’s too late.

LANGUAGE BARRIER
For a true beginner who weighs less than 80kg and lacks the confidence to just “have a crack” on a full size dirtbike, there isn’t much not to like about the PR3 range. However, there are a few annoying things we couldn’t ignore and the first one was the location of the fuel cap.

Having it in the rear is awesome because it means you can get your groin right up under the ‘bar, but the cap is recessed in the seat and will inevitably fills with mud and dirt. This becomes a problem when you need to refuel on the trail, without a pressure washer in sight. Dirt in the petrol tank is a quick way to kill a motor!

The sidestand holds the bike almost upright, which meant finding a place to rest the bike was like locating The Heart of the Ocean necklace that Rose lost on the Titanic. The clutch also got a little heavier as the ride wore on and, for younger riders or those without excellent forearm strength (teenage boys shouldn’t have this problem), that can mean arm pump.

It’s also important to steer clear of the header pipe when it is hot. As you can see in the static image, the header pipe has no heat shield so if you brush your leg against it you’re going to know about it.

The AJP feels and looks different to what we’re used to seeing, much like an exotic European date. So if you don’t like fitting in with the crowd and want a bike that stands out, look no further. With a bunch of quality components including aggressive footpegs, a solid handlebar, comfortable levers, large disc brakes and, of course, those black rims, there isn’t much more you’d have to spend on the AJP PR3 MX Pro. 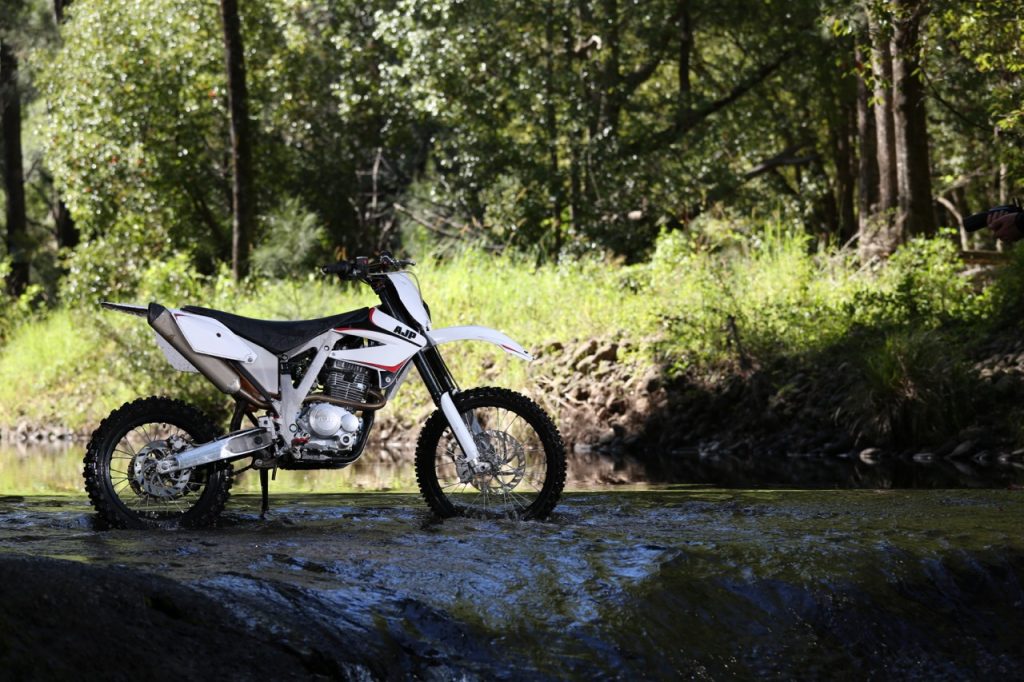