Diary of Mitch Evans: A Week in the FIM Motocross World Championship | Features

After a five-month absence from racing, the MXGPs returned with a bang as rounds three, four and five were held in an action-packed week at the Kegums facility in Latvia.

During that time, Team HRC’s Mitch Evans made some notes about how his week went and what it was like in this first-ever FIM Motocross World Championship MXGP triple-header.

Arrived in Latvia after getting an all-clear COVID test in France. Still needed another test in Latvia though so headed to the track to get a second test there. Motocross track looks in great condition. Staying in Riga which is about 45 minutes away from the track, along one road. Probably know every road sign by the end of the week.

Got another negative test result and then headed to a small practice track just to make sure everything was setup right for the weekend. Did some practice motos, some starts and tweaked a few things but very happy with the end result. Awesome to see all the team again after this long break. I’d been in Australia in the break and then went to France a couple of weeks ago so this is the first time seeing everyone again. Then went to Kegums afterwards to get the all-clear from FIM Motocross World Championship doctors.

Despite it being a Saturday, didn’t have to get to the track too early as with this new schedule we only race tomorrow. Had a chilled day, checked out some of the Motocross World Championship EMX action just to see how the track was racing. Massage with Filippo just to get all muscles relaxed. Feeling good though and can’t wait to get started. Lots of speed cameras on the road to the track so making sure to stay slow and steady. Hotel is good and enjoy coming to this country. 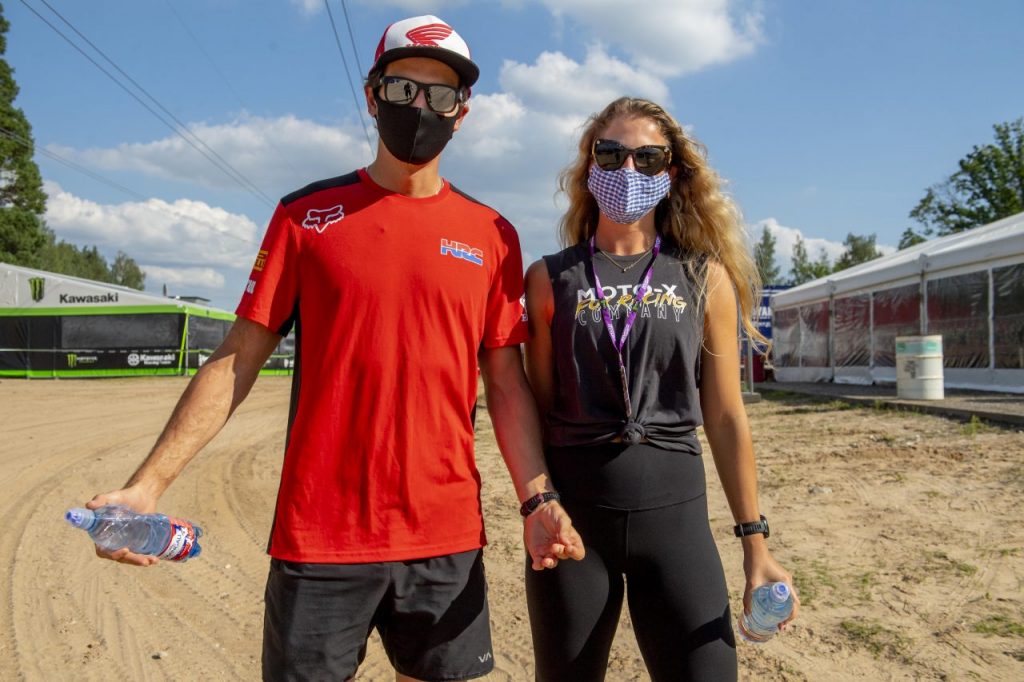 Finally, race day! Qualification went okay, would have liked to be a bit further inside but not bad for first race back. Shoulder is fine but I know I’m not quite as strong as I want to be. Bike is running well though and can’t wait for the gate drop.

Well the two races definitely didn’t go to plan. Involved in two start straight crashes as other riders just decided not to turn right. Battled hard to come through the pack but it was tough work in hot conditions. Not the comeback I would have liked but at least we are racing again. Should go better in the next two races. Post-race massage to loosen the muscles after my toughest day in five months.

Family photo meant another trip to the motocross track, and another drive along the river to Kegums. Took another COVID test too, which came back negative. They aren’t fun but are a requirement and if it means we get to race, I don’t mind too much. Enjoying Riga as a city, it is a beautiful place.

We’ve changed a couple of small things for this race, which we discuss in the team meeting. Happy with my recovery from Sunday and again, looking forward to racing tomorrow. Don’t think I’ve ever done two important races like this so close together so excited for that. Just want to get round the first bend in the decent position. Almost getting used to wearing a facemask everywhere at the track. Had an interview with OTOR / RacerX’s Adam Wheeler, and it’s always nice to get some media attention.

Race day again once again got caught up in the first turn. It’s a shame this track doesn’t change it as it seems every moto there is a crash there. Second race I finally got ahead of the trouble and rode well for the first half of the moto. Unfortunately, I couldn’t keep that pace going so I know I need to work on that but at least I could finally show my speed. The more laps I do, the better I’ll get so just keep tucking them all under my belt. 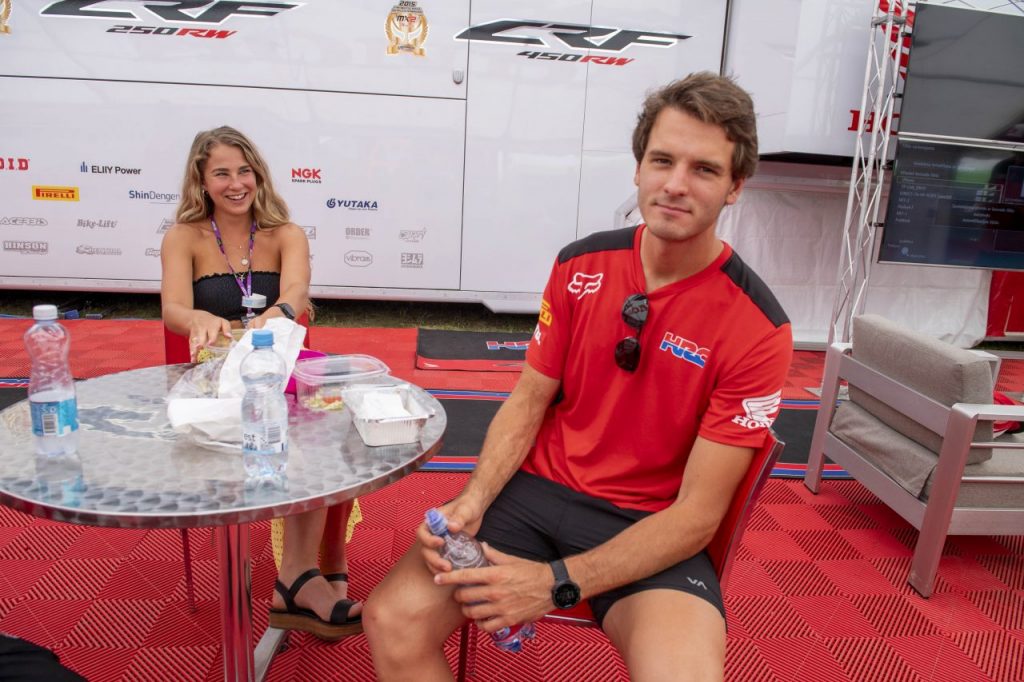 Chilled day back in Riga and the weather was rainy and actually cold. Had a massage with Filippo to help with the recovery but didn’t get up to too much more. The one-day format and having three races so close together doesn’t give you much time for anything else but I’m definitely preferring going racing over sitting on the couch.

Did a bit of gym work in the hotel, just to keep improving my upper body. My legs are good because I was able to cycle during the break but my upper body got left behind a bit because of the shoulder. Feeling much better than I did before arriving in Latvia though so can’t wait for this third and final race day.

Team meeting at the track just to go over things. I’m feeling pretty good about tomorrow though, because I know that the more I ride, the better I get. After the EMX classes, I did the GoPro lap for Infront/FIM Motocross World Championship. I’ve had some stick about this because I crashed when doing a GoPro lap in Italy in the preseason but this one went off without any problems. The changes to the track seem okay but that definitely isn’t going to be an uphill triple! Nice to get a small amount of track time. 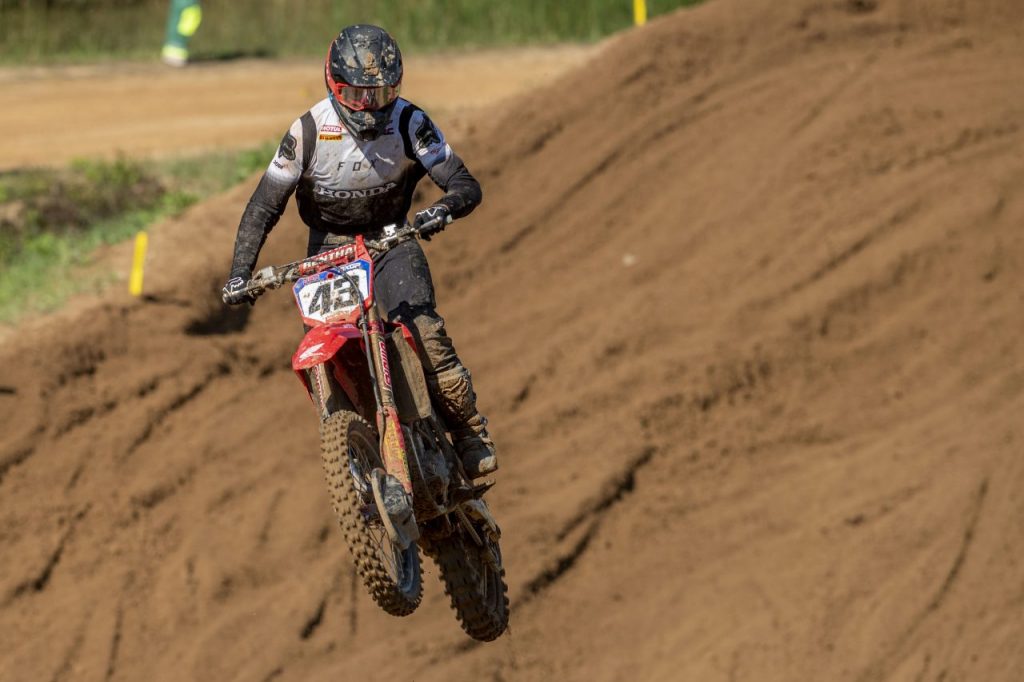 Temperature is back to where it was last Sunday; hot and sweaty. Made a few adjustments during the free/timed qualifying session but time is limited and need to get a hot lap in. Similar position on the gate all week which hasn’t gone well but got a good start in the second moto on Wednesday so fingers crossed.

Well I survived the first turn both motos and was able to put in two much better races. Moved through the field and was able to pass people continually on the track in both races. First race started 18th and finished 12th. Second race started 15th and finished 9th so six riders passed in each race and just generally rode much better. With a bit more bike time and some better starts, I know I’ll be able to challenge at the top again and that’ll be the aim when the next round comes. Rumours are that Turkey will be cancelled, and we’ll be racing in Italy for quite a few rounds which is good as I’ll be around the team and we can progress together.

After arriving from France, I’m now flying to Italy with the rest of the team. It has been a tough week and it definitely didn’t start off very well but overall, I’m happy with the progress. It’s been good to go racing again and this week made me realise how much I enjoy the adrenaline that comes every gate drop. Big thanks to everyone involved to get this week sorted, I’m sure it wasn’t easy to organise. And a big thanks to the team for sticking with me and having confidence in my ability. Going to keep working in the break and come back even better, wherever the next round is.