EXCLUSIVE: Ricky Carmichael on his rivalry with Chad Reed | Features

With seven AMA Pro Motocross Championships and five AMA Supercross ones to his name, Ricky Carmichael’s legacy speaks for itself.

Ricky Carmichael won an incredible 24 motos straight in the 2002 AMA outdoor season. He’s won X Games gold medals and the list of achievements goes on and on.

Nobody knows Chad Reed better as a racer and adversary than the GOAT. The battles these two had were intense and the rivalry escalated during the 2003 supercross series as a rookie by the name of Chad Reed took it to the champ.

Tensions rose drastically thanks to the two athletes’ massive entourages, which often seemed to have bigger egos than the two riders! Once James Stewart entered the fray, the trio had some of the most fiercely fought battles that our sport has ever seen. Each rider had their own strengths and minimal weaknesses. This is Ricky Carmichael’s take on our man:

ADB: What’s your earliest memory of Chad Reed?
Ricky Carmichael: I remember hearing a lot about Chad during the 2003 pre-season Supercross races in Europe. He was chasing all the big ones, Geneva, Paris etc. And he was doing a lot of winning. At that stage, I wasn’t too phased by it all because once Anaheim 1 arrives everything changes. However, now that I think about it, I can clearly remember back to the previous season watching him in the 125SX East races. He was quite impressive already and the class of the field. But none of us honestly had a clue what we were in for in the latter part of the 2003 series after stepping up to the main class [250 two-stroke]. 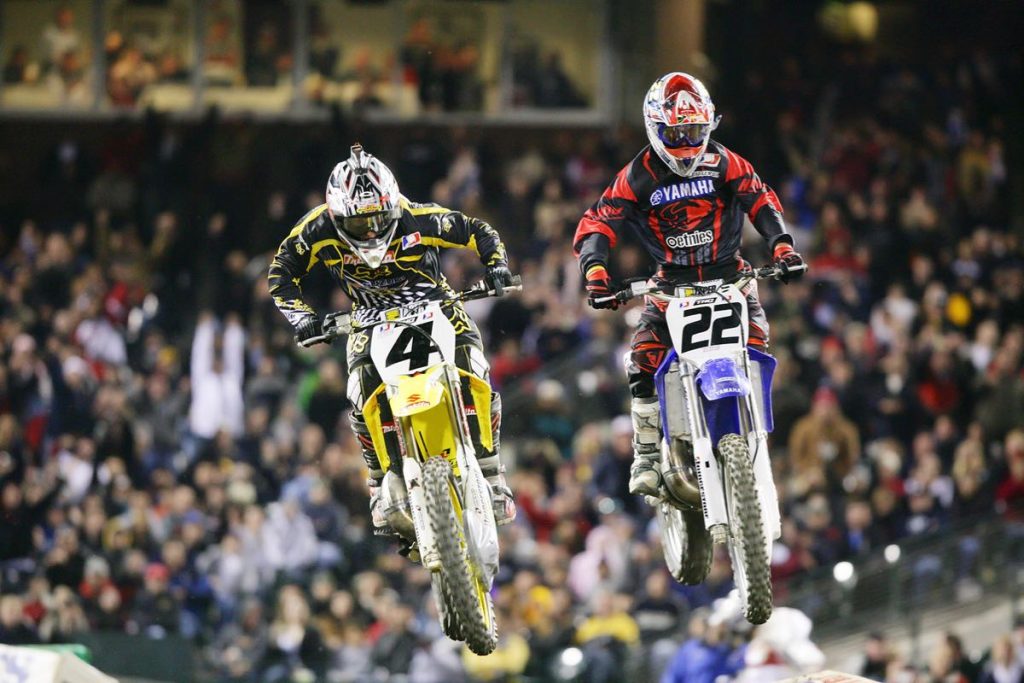 Ricky Carmichael rates Reed as one of his biggest rivals

ADB: You guys had a fierce rivalry, and it’s fair to say you weren’t catching up Friday night for BBQs, but was there one thing in particular that kicked off that rivalry?
In my opinion it was a slow build-up to what became a huge rivalry. At the beginning of 2003, and then midway through the series everything lined up for him. His confidence was at an all-time high! His machine was so well dialed in and he knew it… I was struggling with my machine and I rode out the series. The electronic-power valve CR250 was so sensitive to tune and we were having struggles each weekend. Both of us were so damn hungry and wanted to win as much as the other. I ended up winning the title after a real strong start but having Chad smoke me in the second half is not how you want to win a championship. I have to say though, what made it so hard to beat Chad was his pace. He never rode over his “comfortable” pace but he was so dang fast. And that’s a hard formula to beat. Our entourage really grinded against each other! They absolutely hated each other as well. Everyone wanted to win….

What made him so hard to race against?
I think Chad had all the I’s dotted and T’s crossed with his program. And I mean everything, from his bike, to his on-bike training, his off-bike training, the small crew he had around him. He was just so dialed in! He came out of nowhere and took us by surprise! I was caught off guard. I wasn’t expecting him. I was expecting David Vuilimin! My mechanic had been at the Geneva SX during the pre-season and came back saying “watch out for this Chad Reed guy” and I was like “whatever”. He had all the facets of what made a champion. He was a lot like McGrath. You had to let it all hang out to beat those two. And I mean you needed to be prepared to get a bit loose. He was a warrior! There were times when I’d hear he was hurt or sick, and that was when he seemed to ride best. When his back was against the wall! Whenever I heard he was sick or hurt I was like oh shit, here we go!

Another thing I found with Chad, if he was having a bad day and was off the pace, if he could somehow get right on you in the Main Event he could find those lines and that pace and totally turn it around. And that was such a rare thing. And, man, it used to piss me off! 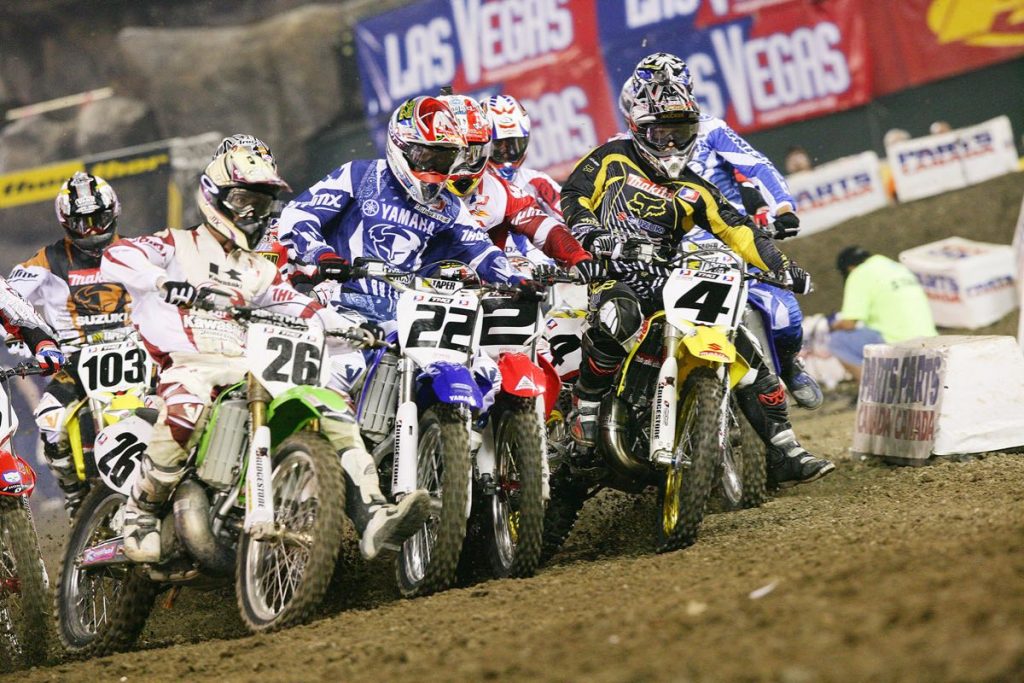 Is there any particular stories that stand out? Let’s pick one good and one bad!
Ha ha, well we had a lot of good battles, especially in 2003. It wasn’t a fun season for me. I’ll go back to Atlanta 2005. That was a fun one for me after I missed the 2004 season with injury and Chad won the title. I felt good [at Atlanta] and wanted to kick his arse. I think I was leading and I fell down. Then I caught and passed him again for the win. It was some sweet redemption! The following weekend we’re halfway through the Main and he had me on the ropes! I mean he was all over me and I made a little mistake which was all he needed. There was one time at Phoenix in 2005 where I rubbed him before the triple and he was unable to get over it. Just little things like that which stick in your mind.

I was with you on a bus during a trip to the All-Japan MX Nationals when you got Chad on the phone back in America on loudspeaker. The banter was coming thick and fast and I believe you may have said to him something about your Suzuki 250 two-stroke giving him some sleepless nights, and he came back with a comment about the size of those whoops back in the day doing the same for you. There was plenty of genuine laughter and a huge amount of mutual respect.
The mutual respect was there for sure. There always was! But that solid banter didn’t come until years later. To look back on those moments, it’s great. We always have our little things that we pick on from our glory times to rub it into each other. But the rivalry was strong and we talk about it to this day. We can reflect and enjoy what were some of the hardest times physically and mentally in our careers. I will cherish those moments forever. 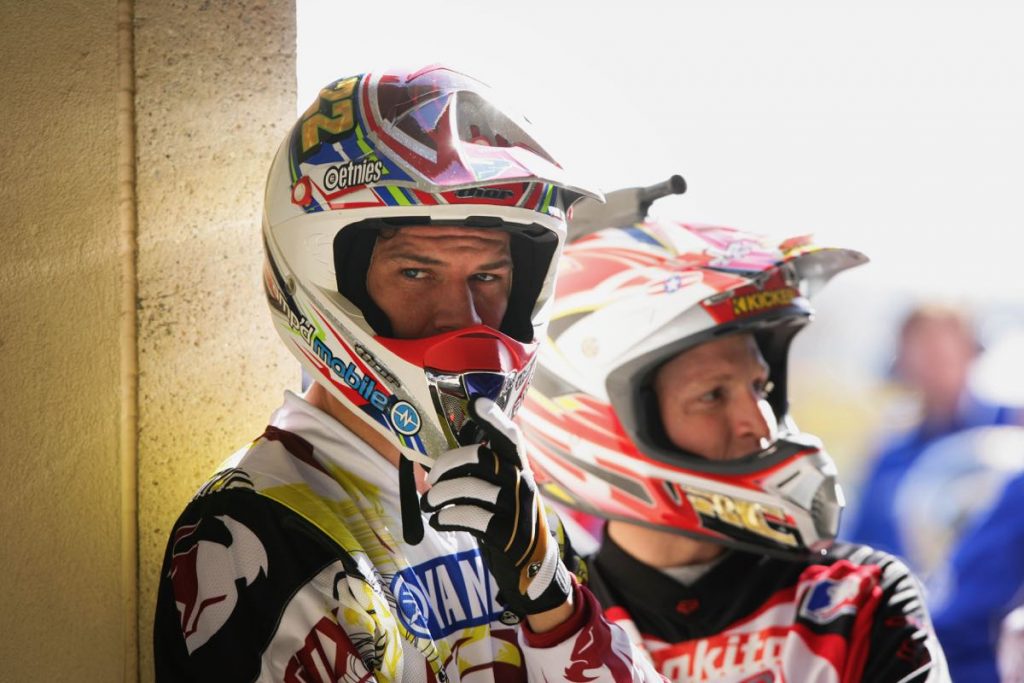 At what point did your relationship go from bitter rivals to actually being mates?
It happened over a period of time. I think it was 2006 and we were on the same flight home from an outdoor MX round and I think him and I just started talking, and we kind of just buried it and became mates. From that point on we would talk at the races. We wouldn’t let any of the bullshit from the entourage get in the way.

The two of you, along with James Stewart, were at the top of the sport while it was in its glory days. Huge pay cheques on the line and some strong egos. What was that like to live through?
It was an exciting time, I’m sure for all of us. I mean there were no-holds barred, huge budgets and huge expectations. The three of us all wanted to beat each other really bad and there was a lot on the line. On race day when everyone would see all the glitz and glamour, that’s really such a small part of what goes on. We would all be training our butts off and trying to be at our best come race day on the weekend. 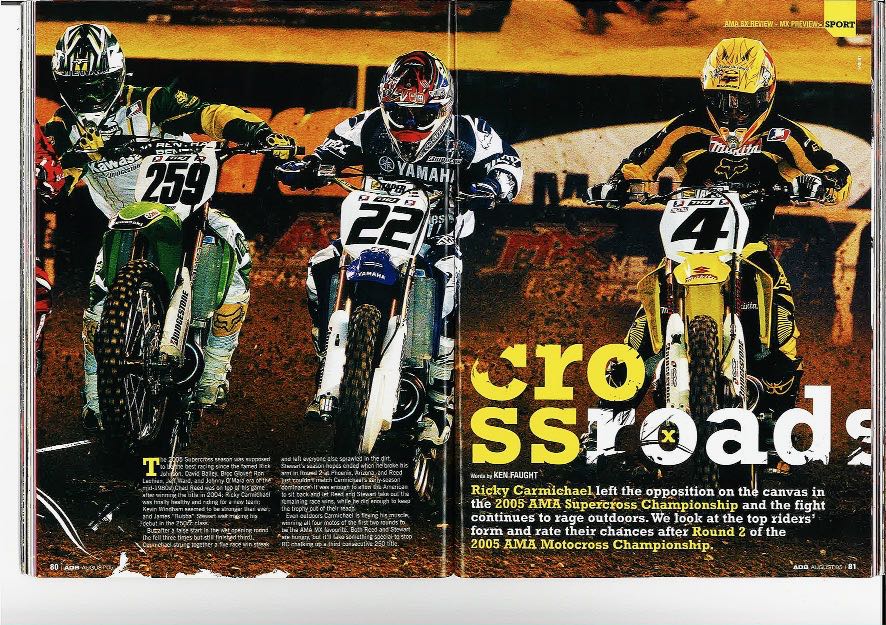 Ricky Carmichael cleaned up in the 2005 Outdoors

What do you believe was Chad’s strongest traits as a complete athlete, including skill level, work ethic, desire etc? And were you able to find a chink in his armour, some kind of a weak link?
I honestly feel that Chad was such a well-rounded athlete. His strongest traits were his raw speed, and his willingness to ride through adversity. I would have to say if I had to pick a weakness of Chad’s it would be outdoors compared to supercross, where it really was difficult to find any major weaknesses. But, that being said, Chad won outdoors and did incredibly well in a couple of MX des Nations events.

Where does Chad Reed rate in your list of opponents?
Top three easily! If not the best! Remember though, I’ve raced against the best in all-time wins, with McGrath and Stewart. They were all hard to beat in their own way.

Thanks so much for your time Ricky! You’ve kept us entertained over the years with your ‘never say die’ attitude, your record-breaking results and continue to entertain us with your insightful expert comments hosting the AMA Supercross coverage.

My pleasure, Hoges! All the best for Chad’s retirement and it’s been a pleasure talkin’ to ya mate!