As the curtain closes on another Spanish opera, we take a look at two of Gas Gas' biggest stars, the EC300 and Ranger 300

I was lucky enough to call a 2019 Gas Gas EC300 my own for 12 months and during that time I also scored a few rides on the Gas Gas Ranger 300. The Gas Gas Ranger 300 retails for $1000 less than the EC300 and it’s fairly obvious where Gasser saved that money. The Ranger doesn’t get the 48mm KYB fork found on the EC300. Instead it features a lower-spec 46mm unit from the same company. Other changes included Spanish Braktec calipers instead of Nissins, a generic handlebar and a heavier lead-acid battery. The Ranger is 2kg up on the EC300, despite losing the kickstarter, but the 30mm lower seat is a godsend for the vertically challenged. 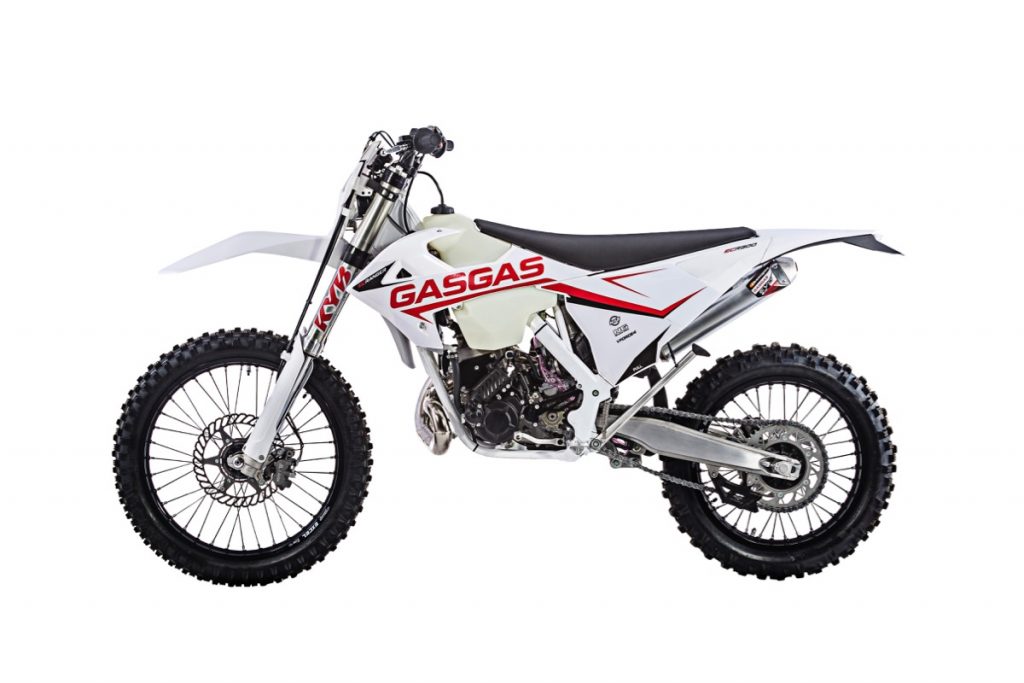 The Gas Gas Ranger 300 engine room didn’t escape untouched. Gas Gas fitted a Tecnigas muffler, a different cylinder, lower-compression head, Keihin PWK 36mm carburettor and a skinny expansion chamber to encourage bottom-end torque. The pipe does an amazing job of dulling down the power delivery – torque output is almost like an electric motor, but there is no top-end.

FIND YOUR NICHE
The Ranger was designed and built with hard enduro in mind, think Erzberg. Although it’s heavier than the EC300, the lower seat height, softer suspension and detuned engine still make it more suitable.

At slow speeds through rough trails like a rocky creek bed, the Ranger’s engine can be held low in the revs while still giving you enough punch to pop the front wheel over logs, rocks, or whatever you’re trying to get up and over.

The EC300 will also do this without complaint but where the Ranger excels is the width of its low-down torque range. It’s particularly helpful when the ground is slippery and the rear wheel wants to keep breaking loose. The EC300 will rev up as soon as it loses traction while the Ranger is tuned to keep its composure. This difference between the power delivery of the Ranger and the EC300 is amazing. It’s also why I’d recommend the Ranger to new riders. The engine doesn’t need constant monitoring, like a disobedient teen, you can get away with sloppy throttle control and weak clutch fingers. 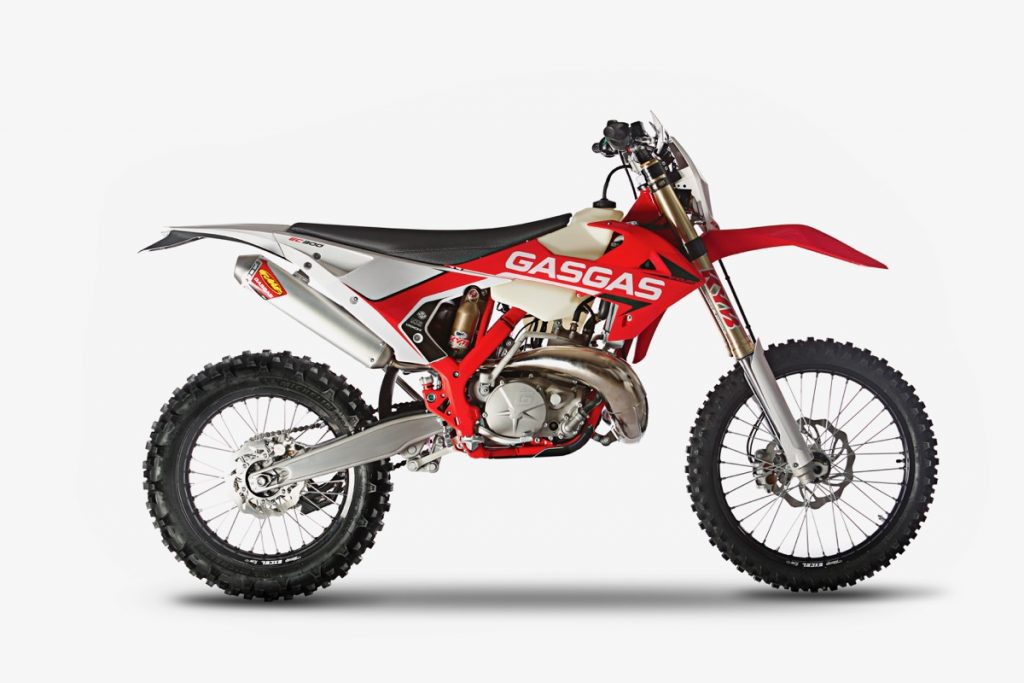 I didn’t find the Braktec calipers compromised the Ranger’s stopping power. I never found it lacking and, if I wasn’t told, I probably wouldn’t have known it had different brakes but colleague Ben Grabham, who had a Gas Gas Ranger 300 as a long-termer, didn’t like them, even after changing the brake fluid.

Playing in the Ranger’s favour is the softer suspension. Hard enduro is slow going so you don’t necessarily need Chad Reed’s supercross suspension. At 46mm, the KYB fork will flex more at high speed, the oil will heat up more quickly and it will probably put you in the hospital if you raced it at Finke.

Although not made for Finke, the suspenders are right at home in rough terrain and even though it’s soft I never found the limit of the fork in the tight stuff. I only found myself wanting the 48mm set when the trail opened up or I found my way onto a sand motocross track (which I did).

The shock is a standout performer in slow, slick terrain where there isn’t much traction. It’s somehow able to find traction where the stiffer EC300 can’t. This is helpful just about everywhere, but in particular when you’re trying to crawl up a rock face after crashing at the bottom, which I may or may not have done. Instead of turning around, I started traversing the rock face and the rear-end didn’t kick out. Then as I rolled on the throttle and pointed north the Ranger just crawled up without any clutch abuse. 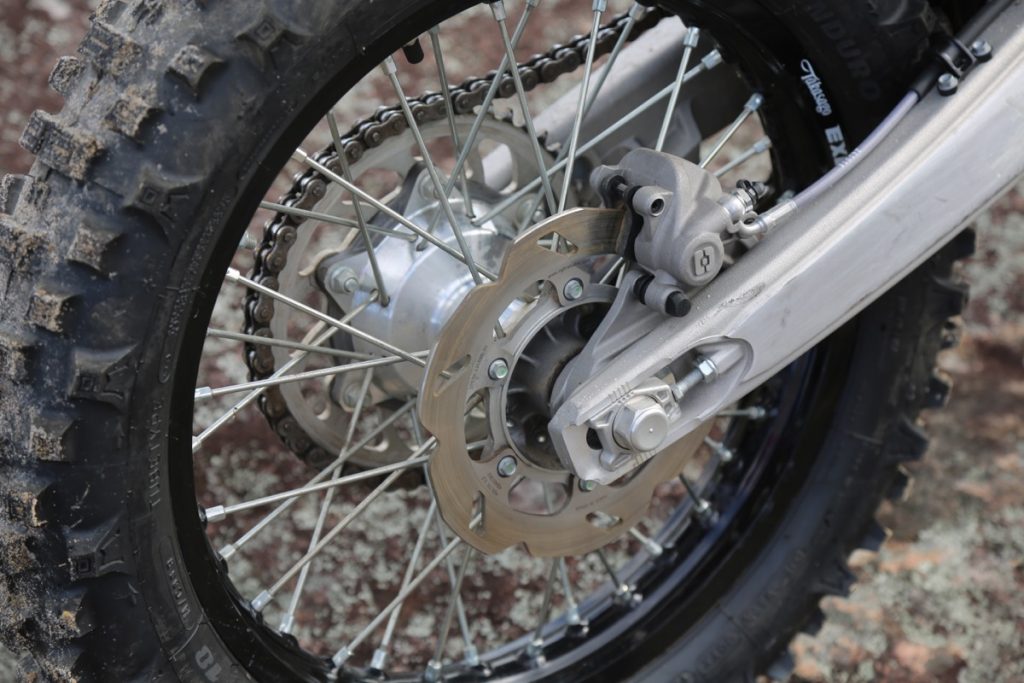 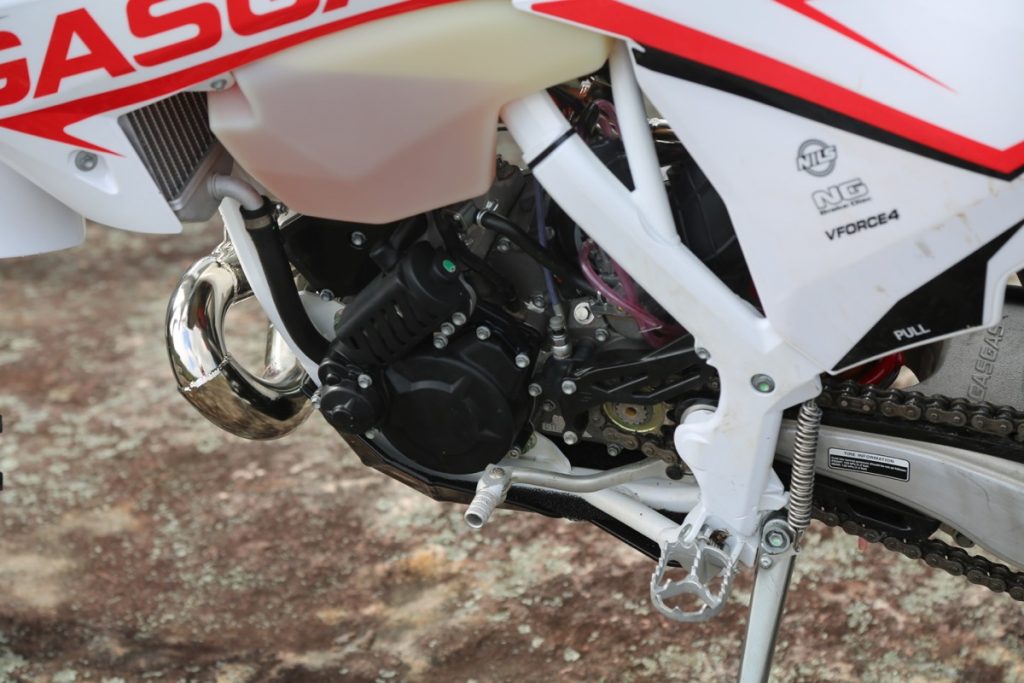 If you’ve read anything I wrote about the EC300 in the past three years, you’ll already know how I feel about it. At its price point, the thing is hard to beat. Choosing between the Ranger and the EC300, I’d take the $1000 hit and ride home on the EC300. Although it’s become hugely popular to throw, drag, scratch and completely destroy a dirtbike under the guise of riding hard enduro, I prefer to ride mine, not drag it – call me old fashioned.

Don’t get me wrong, I love tight, snotty singletrack and technical riding but I also like fast flowing trails and not spending six hours dragging my bike up a hill if I can avoid it. With this considered, the benefits of the Ranger are lost on me. I prefer the EC’s 48mm fork and the wide, aggressive power of its untamed engine. And, at 196cm, I don’t need a lowered seat. While the Ranger is the bike I’d take if I was going to race Wildwood, my usual trailride isn’t as brutal and the EC300 is the better all-rounder.

The torque is still strong but the mid-range comes on a lot sooner and this is what will catch you out on loose, slippery surfaces if you aren’t quick on the clutch. The top-end on each bike can’t be compared. The Ranger pretty much doesn’t have one while the EC300 absolutely screams up top. It’s addictive and so much fun on fast flowing trails.

The stiffer fork is a jack of all trades. It’s hard to find a situation where it doesn’t perform well. 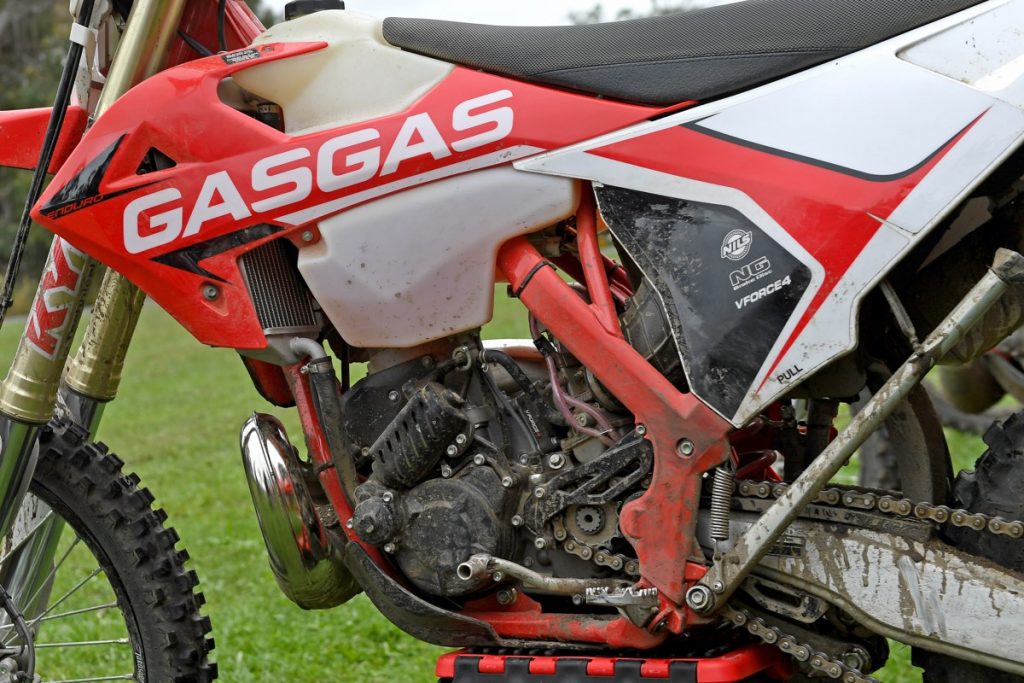 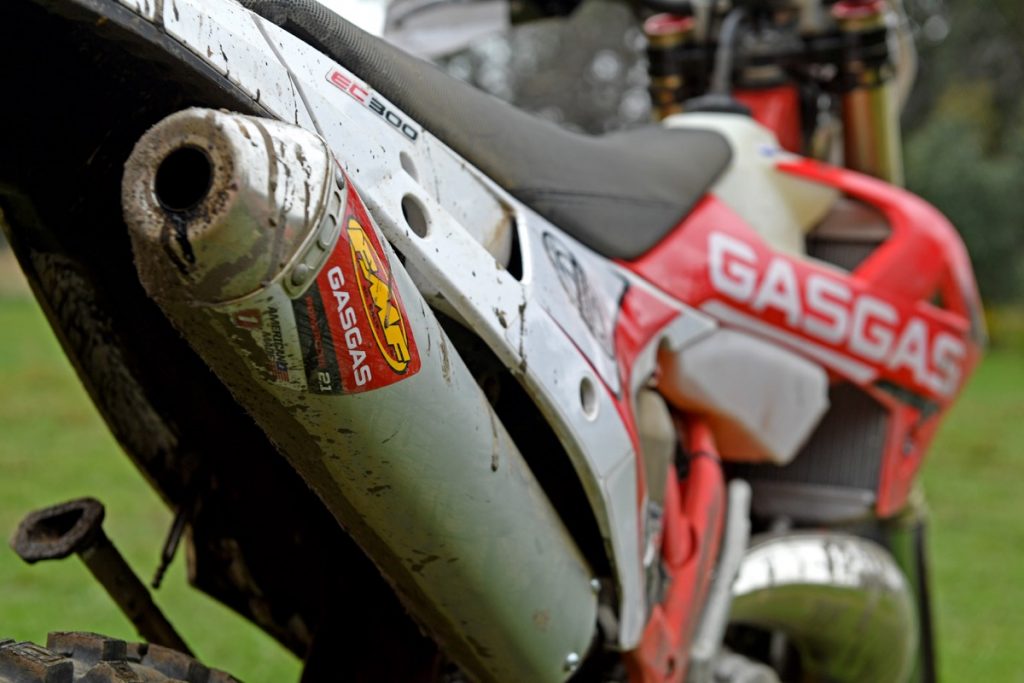 It’s plush and forgiving at slow speed over the same terrain where the Ranger excels, but open it up around a grasstrack or through whooped singletrack and it stays planted and composed. It never feels out of shape and that makes the handling of the EC300 razor sharp. You can put it exactly where you want it. It just about steers itself through rutted turns.

It’s the same story for the shock. In the 12 months of riding I did on the 2019 EC300 I only knocked a couple of clicks out of the low-speed compression damping, and that was only after Grabbo rode it. The rear-end doesn’t kick when smashed into a square-edged bump and it doesn’t wallow through whoops.

If the bean counters at Pierer Mobility have their way and take the easy route, next year’s Gas Gas range could very well be red EXCs and Freerides. It’s a sad prospect because the EC300 and Ranger 300 are great bikes, in fact the Spanish range is brilliant, but it’s not all doom and gloom. At least the brand will still be around and if they are to be based on the current-generation KTM platform they’ll no doubt be incredible bikes. The thing is they won’t have that Spanish flavour that a lot of riders liked about Gas Gas.

Same But Different
While both the EC and the EC Ranger forks are manufactured by KYB, the Ranger one is tuned to be plusher and more forgiving with a different spring rate and valving specs. It’s also an open-cartridge design which can be argued is a better, more forgiving package for the average trailrider.

The EC fork is a closed-cartridge design, which is more complicated to service. These started out on motocross bikes as they were much more resistant to cavitation at high fork travel speeds. These speeds are generally only seen in a competition setting and not so much in trailriding.

The EC300’s 48mm-diameter fork legs are stronger and more rigid. There is less flex in the fork, which means the ride can become rougher, but they are more stable and predictable at high speeds in rough terrain. The 46mm fork of the Ranger is more flexible but gives a more forgiving ride at low speeds and is more rider friendly in a casual trailriding setting. Tech Ed Mat Boyd

If there's one thing a big-bore thumper should deliver by the bucket load, it’s roll-on power. The kind of big, fat, juicy grunt that eats up fast and flowing twin-tracks, fire trails and dirt roads.

Check out one of the most exotic motocross weapons in Australia. The CDR Yamaha YZ450F piloted by Kirk Gibbs.