A few weekends ago I was out trailriding with the ADB boys around the Central Coast and they just happened to have a KLX450R and CRF450L on the ute.

Both are Japanese, four-stroke trailbikes based on motocrossers but separated by 12 years. The KLX450R was introduced in 2007 while the CRF450L came out late in 2018 after years of wailing and begging from the Red Brigade.

In a capacity class now dominated by barely-legal enduro bikes, these two have little direct competition. Not much has changed on the Kawasaki over the last dozen years so how do these two stack up?

On paper they are worlds apart. The KLX450R has an a old-skool Keihin FCR MX40 carburettor and the CRF450L runs the latest PGM-FI fuel injection. The Kawasaki has a five-speed gearbox, while Honda expanded the CRF450’s crankcase to jam in a six-speed for the run to work. 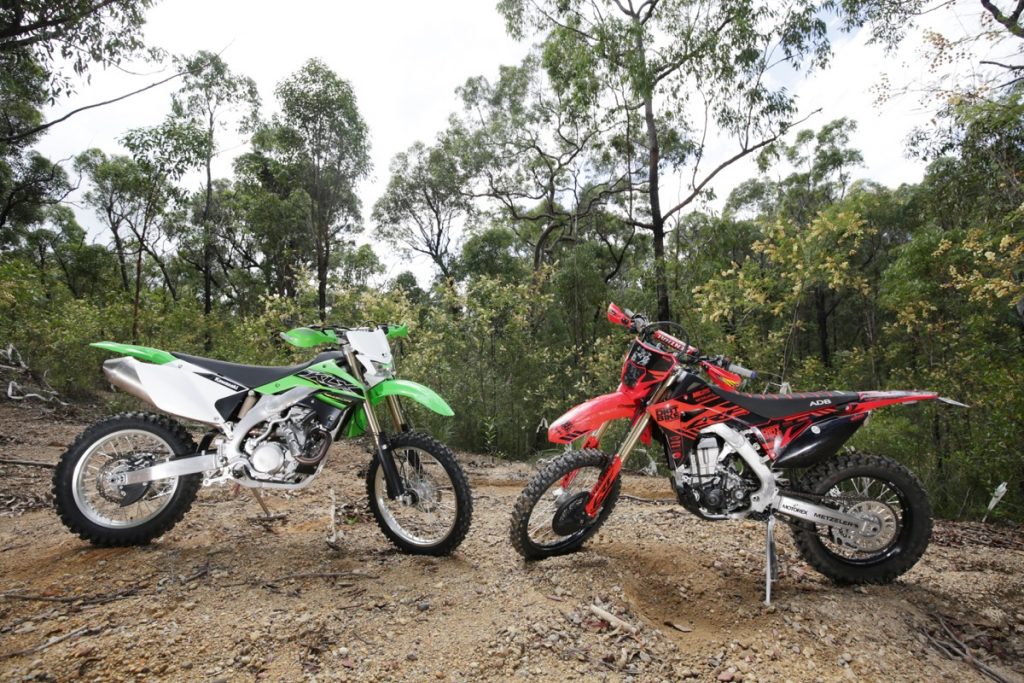 As far apart as they are in some areas, they couldn’t be much closer in others, including their alloy-beam frames. They are only separated by 5mm in seat height, with the CRF450L sitting taller at 940mm, they have the same ground clearance at 315mm and the same fork travel at 305mm.

DESERT WORK
The two areas where I see riders using road-legal 450s are for desert work and trailriding, so I decided to run these ones back-to-back in both kinds of terrain. I had high expectations of the CRF450L but, to be honest, it did not live up to them.

Weighing in at 131kg wet, five more than the KLX, the CRF really does feel heavy on singletrack. The tall gearing did not do it any favours either, as I stalled it a few times.

The suspension was okay at both ends and did not limit the bike the way its weight and gearing did. I was expecting the engine to be right at home trailriding but it lacked bottom-end compared to the KLX with the stock exhaust, making it harder to ride. 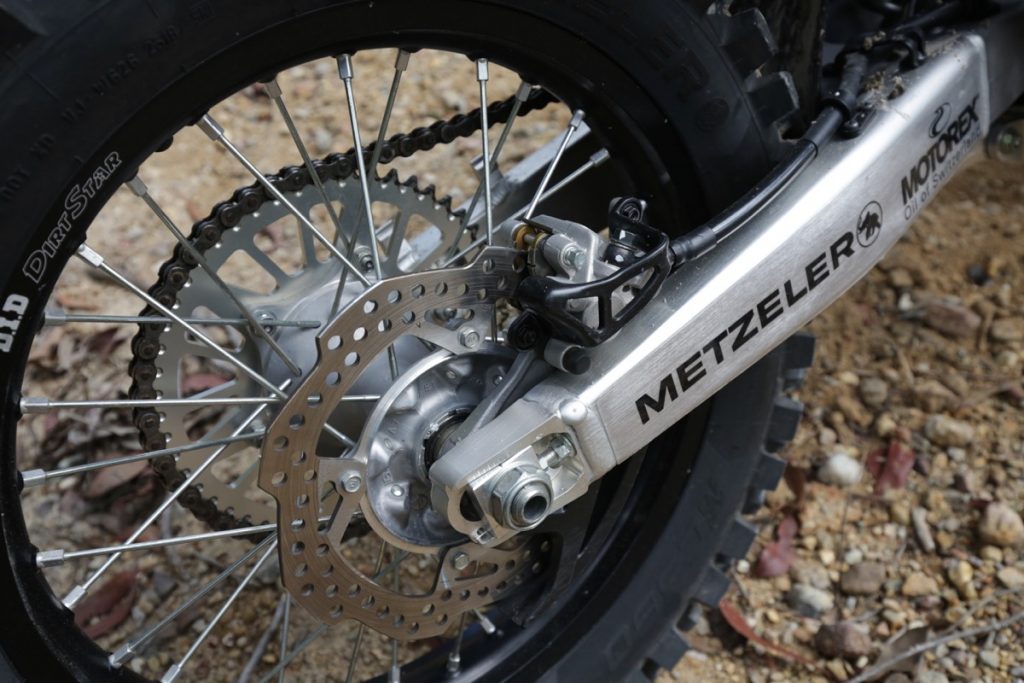 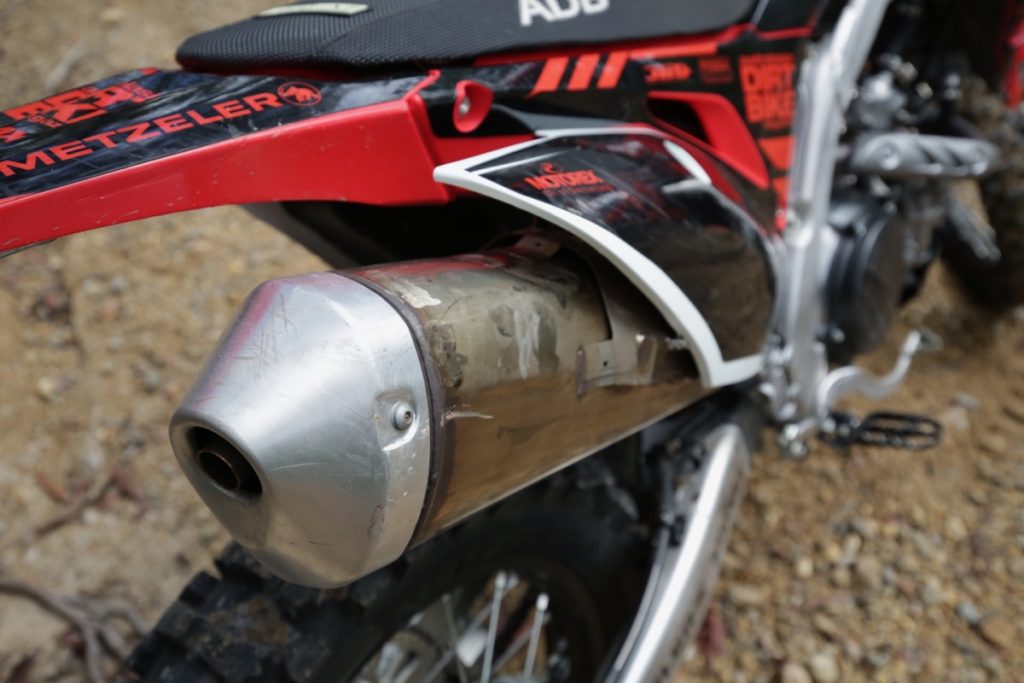 Pretty much everywhere that the CRF struggled, the KLX was rock solid. Yes it’s not much lighter at 126kg wet, but it sure feels like it carries its beef a lot better and lower. Trailriding, I could not fault the power, as the carburettor-fed engine delivers tractor-like torque off the bottom and continues making strong power well into the mid-range and its five-speed gearbox felt right at home on singletrack.

The wheelbase is 20mm shorter than the CRF, which helps the Kawasaki to feel more nimble in tighter terrain. It might be older technology but the KLX450R definitely gets my vote for trailriding.

We weren’t near any desert on the Central Coast but I did know some good open tracks that provided conditions and speeds similar to what I’d find in the desert and this time the CRF performed more like I would expect from a Honda. 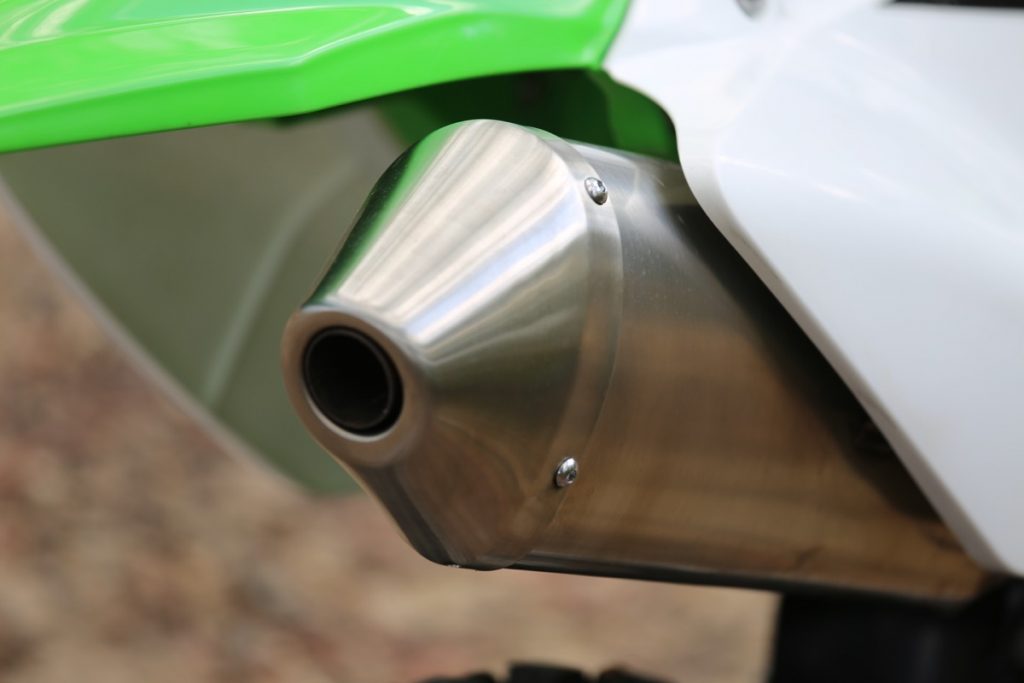 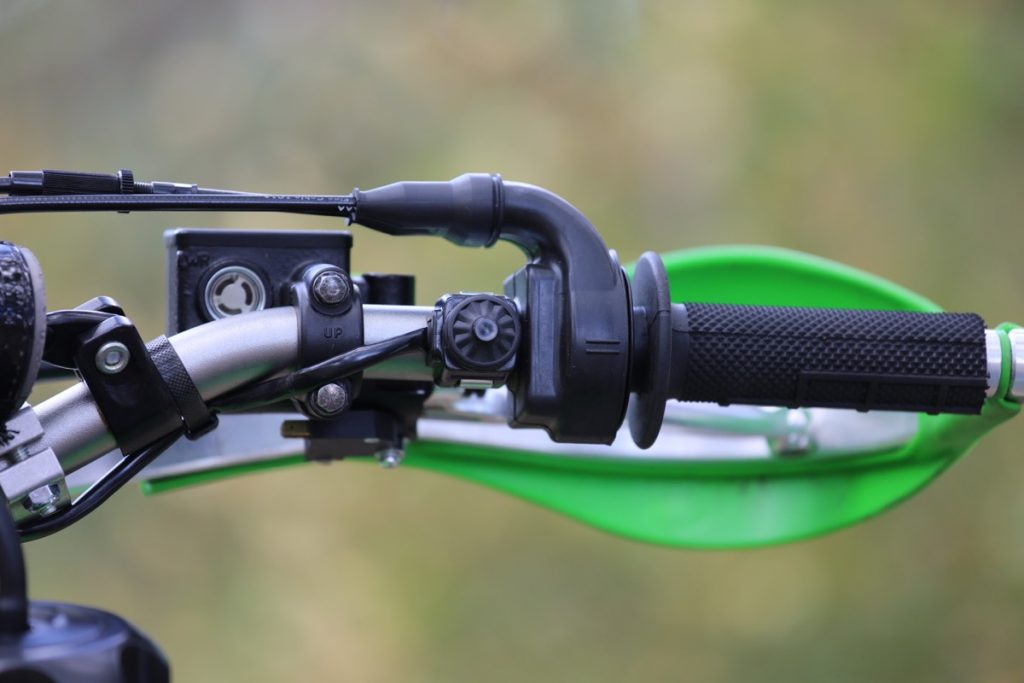 The SOHC engine still felt choked up, but if I kept it revving with the tall gearing, everything felt a lot better than it did trailriding. Its excess baggage was more of a positive, as it helped make the bike feel planted and smooth over choppy ground.

Honda uses a quality Showa 49mm spring-cartridge fork and gas-oil shock and both ends felt happiest in this more open terrain. Having the 20mm longer wheelbase helped make the CRF feel slightly more stable than the KLX at speed. Even with its extra weight, the CRF pulled up slightly quicker than the KLX when I needed it to thanks to its bigger 260mm disc. It’s also going to go longer between major services, with Honda recommending piston changes only every 32,000km, which is more appealing for a rider who spends a lot of time in the desert.

Power was easily the standout for the KLX on desert-style terrain. The DOHC engine does sign off a little early up top but because the bottom-end torque and mid-range is so strong, I never found myself needing to rev it that hard. 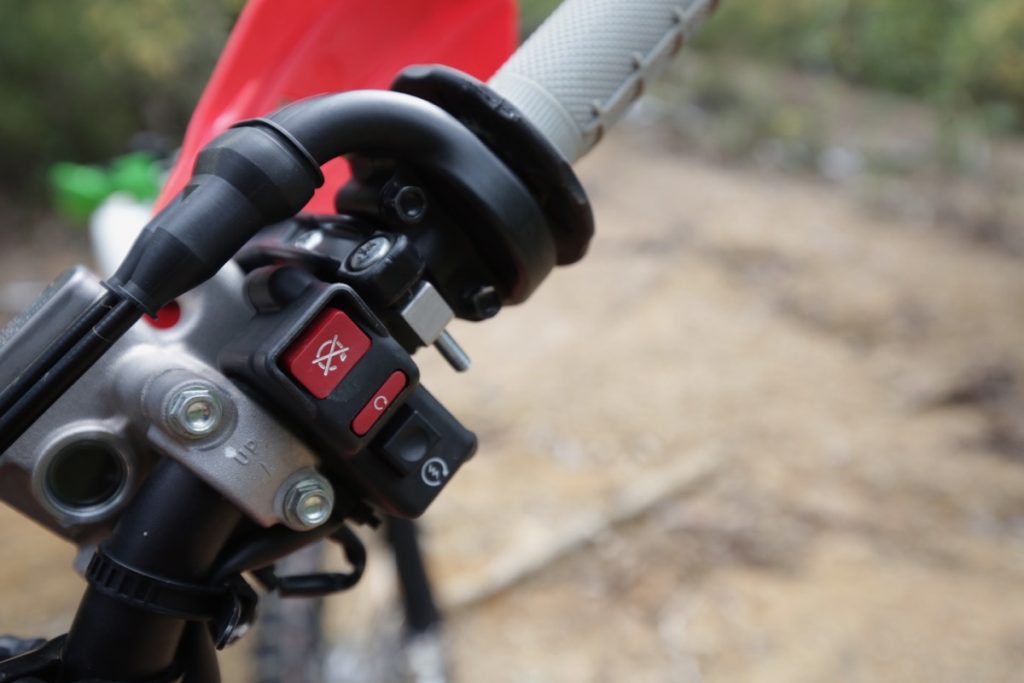 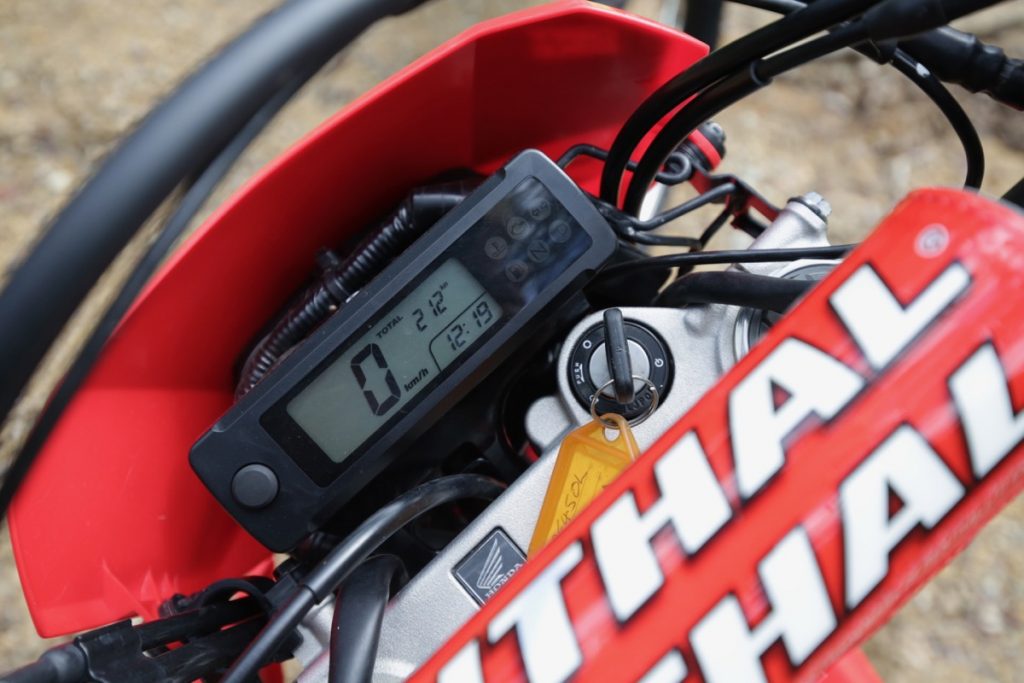 SUSPENSION
The KLX450R has been around a long time, so it’s fortunate that its designers did not hold back on suspension. It runs quality KYB units at both ends which provide a comfortable ride. The twin-chamber AOSS fork bests the Showa, as it provides the most comfort on all terrain and still handles big bumps and landings best.

There were a few straights that I ran out of over-rev on the KLX. The ratios were not an issue for trailriding but it lacked some velolcity compared to the six-speed Honda on big straights. The other area where the KLX was slightly lacking compared to the CRF was in the braking department. The 250mm front disc just doesn’t provide the same power as the 260mm Honda one, although this is an easy fix.

Choosing a clear winner in the desert was much tougher, as the bikes were very close but if cost is a major concern, the KLX450R is more affordable at $11,199 while the Honda is $1800 more expensive despite a price cut. You do get modern tech and a better warranty with the CRF, at 12 months compared to the KLX’s three.

It would have been interesting to have had Clubby’s long-term CRF450L along for the ride with the $2600 LX Enduro Kit fitted, but that’s a very different beast.

• Over the years carburettors have proven how reliable and easy they are to fix if anything happens.
• Definitely not the lightest 450 but hides its weight well in trailriding situations, giving a very planted, safe feeling.
• Very comfortable seating position, making long days in the saddle enjoyable.
• The kickstarter can come in handy, especially if the battery or starter motor fails.
CONS
• Fuel economy with the carburettor is definitely worse.
• Oil change intervals are every 1000km. This is not too bad for trailriding, but 1000km can go by pretty fast in the desert.
• Recommended replacement of the piston and rings is every 1500km and this wouldn’t be affordable if you lived in Alice Springs and rode Finke every weekend.
• Air filter access is tool-less, but it’s a tight squeeze.

• The six-speed gearbox can handle high-speed terrain and road work with ease.
• Honda has done a great job of making the cockpit comfortable.
• Fuel economy is great but will worsen if you fit the LX kit.
• Clutch pull is light and smooth despite the cable.
CONS
• With a 131kg wet weight, the CRF is hard work in tight, twisty terrain.
• Just like the Kawasaki, the oil needs to be changed every 1000km and this can come up pretty fast on long rides.
• Gearbox ratios feel very tall with the standard cogs. I stalled a lot, even in first gear, getting through tight terrain.
• In standard trim, the power is not as good as I would have expected. It feels very choked up.