ADB Enduro Editor Geoff Braico gets a rush of blood and decides to rebuild a 1996 Honda CR250 after watching Jeremy McGrath in reruns of the 1996 AMA Supercross Championship.

I don’t know what started people buying old-school two-strokes and restoring them but for me, it all began around a year ago when I was trolling through good ol’ Gumtree one night after watching the 1996 AMA Supercross season on YouTube. The king of supercross, Jeremy McGrath, absolutely smashed everyone that year on his way to winning 14 out of the 15 rounds and did it every weekend with ease.

MC could do no wrong it seemed and his bike just looked spot on every time it was out on the track.

I said to my partner, Ash: “I would love to ride one of those ’96 CR250s, they just look so fast and sound so sick!” So, off I went on what I thought was a hypothetical Google search for a CR250. Next thing I knew, there was a bike staring back at me for $1600. The thing was a pile of junk, black plastics scratched beyond repair, dinged-up pipe, tyres that looked like they’d done a million hours and that was only the start.

I did some research checking out parts prices, other resto projects and it soon started consuming my day. The only thing holding me back was the fact that I was freshly engaged and we had to start saving for our wedding. So, I did what any man who wanted a CR250 would do, I kinda fibbed to my fiancée. I remember telling Ash that I was going to buy the bike, restore it and flip it for a profit. Amazingly, she bought my story and even chipped in $500 as an investment! Next thing I knew, I was on the Hume to Holbrook and back, handed the guy $1600 and was wheeling a ’96 Honda CR250 into my garage. 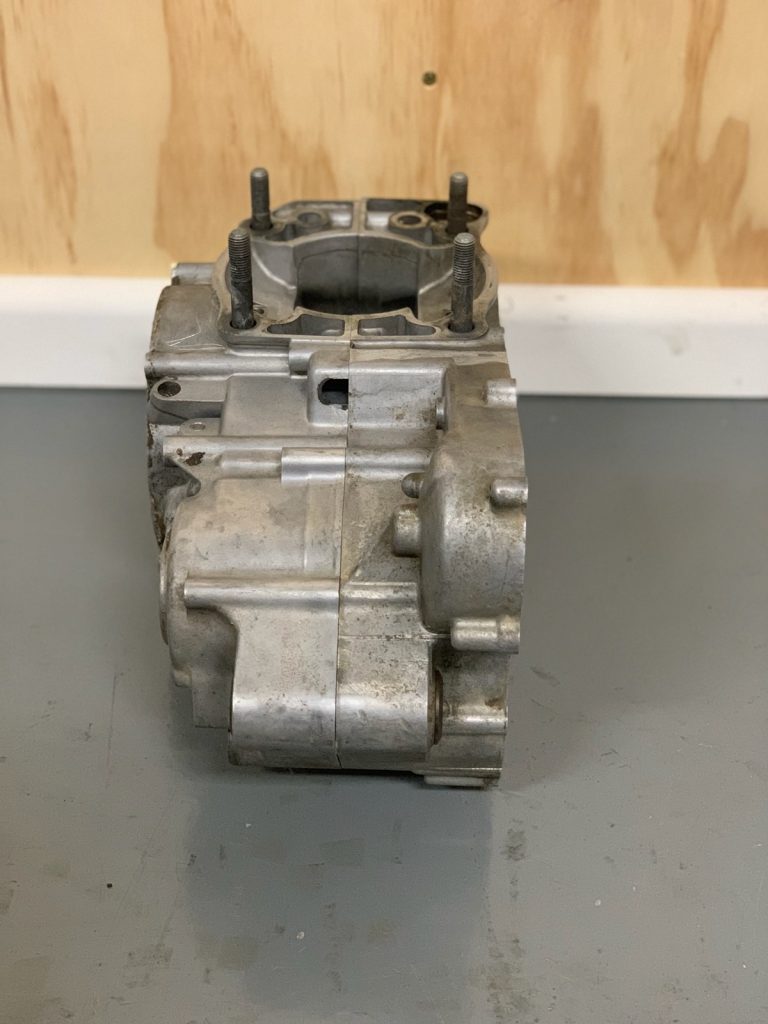 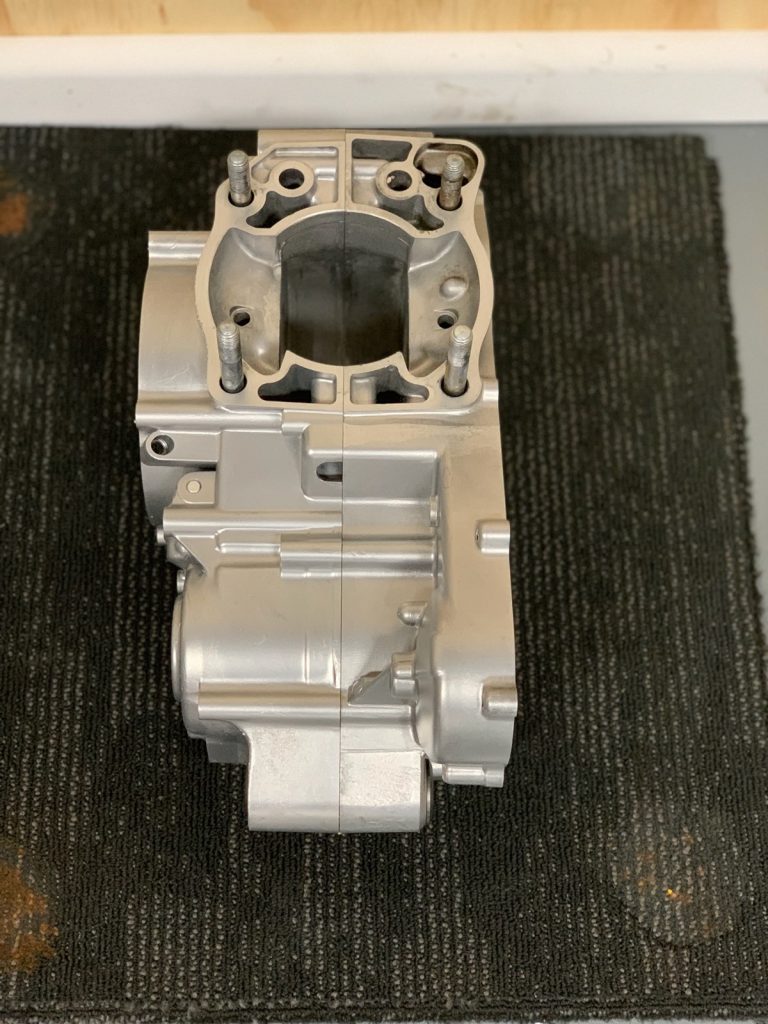 WHAT HAVE I DONE?

I started the bike before I bought it and all I was concerned about was the condition of the motor. Everything else could be fixed quite easily. Having ridden and raced two-strokes all my life, I had a pretty good idea of what an engine should sound like. I started the beast and, to my surprise, the motor was quiet, it was jetted spot on and I could not believe how crisp it was.

I got it home and, after a few short laps around the block, my worries about buying the bike faded and I began planning what to do next. The motor was good but I discovered all the bearings were toast, the carby was leaking like a sieve and the vinyl seatcover was so slippery I could barely ride it.

I just wanted to get the bike up and running so I thought I would fix it on the cheap, then I could make the call on whether to keep it or sell it. I stripped the bike and had the frame and subframe blasted and recoated in the genuine white. Just doing that made me feel better about my purchase. 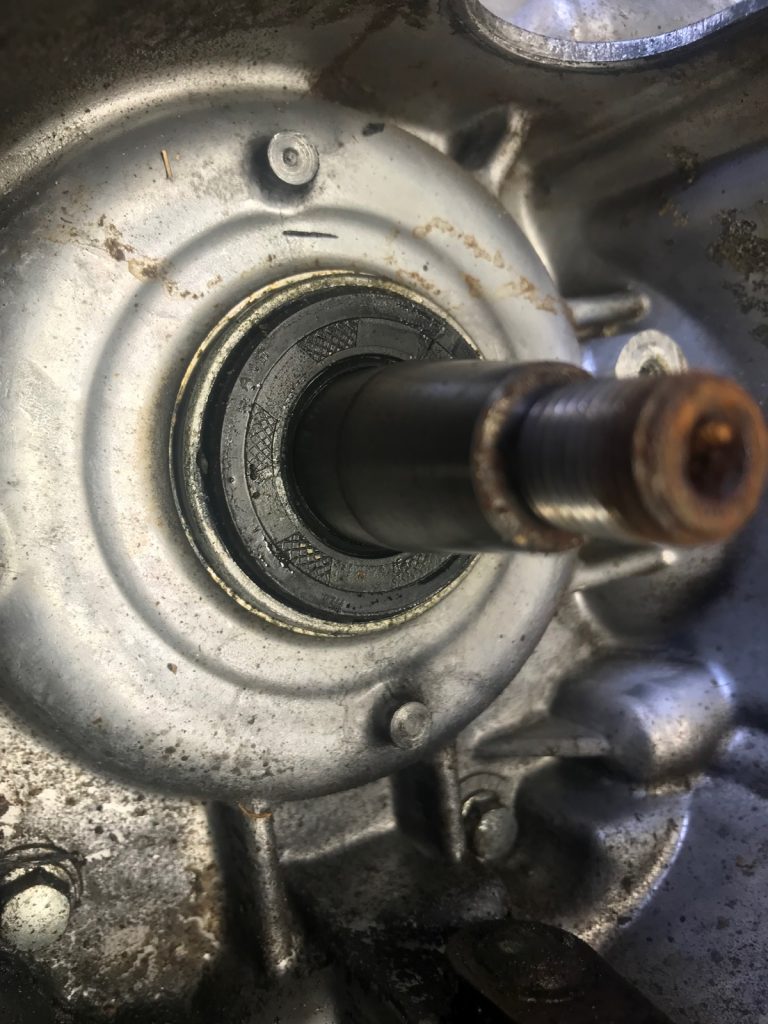 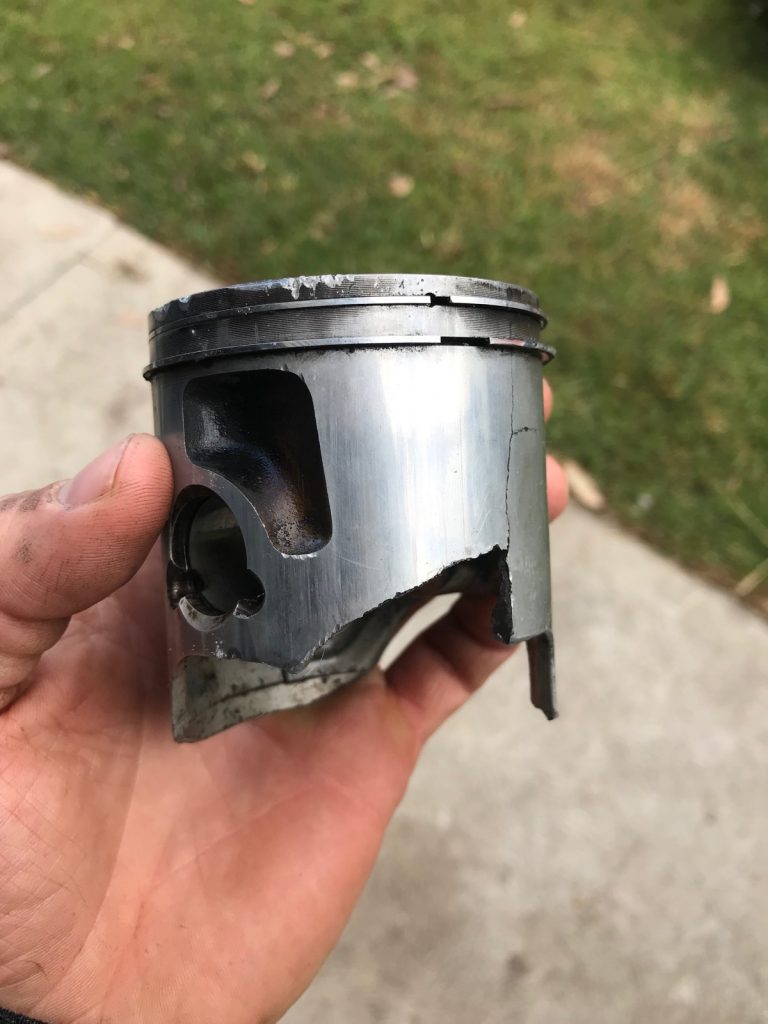 I polished the swingarm, bought some bearings on eBay, gave everything a good once over and bolted it all back together. I also picked up a new carby from a guy in Queensland and he even jetted it for me! I could not believe how good the motor was. It was so torquey, revved super clean and I was blown away with the bottom-end power.

Sure, it vibrated more than today’s two-strokes but the power was what won me over. So, I decided from that day, that selling it was out of the question and that I was going to go all out with this bike. Sorry, Ash.

The slippery, slimy stock seatcover had to go, so I called Mario at Topline Upholstery in sunny Victoria. Mario replaced the dodgy old seat foam with 30mm taller foam and also made me a replica MC red/black CR gripper seatcover. What a difference, I could actually stay on the bike through corners.

Next was the suspension. It was bad in ’96 and it was still very bad. It felt like I was bouncing off every rock, root and bump out there. I had ADB’s tech guy, Mat Boyd, give the fork and shock a quick service and he made them feel better but the front was just rubbish, and ultimately, had to go. 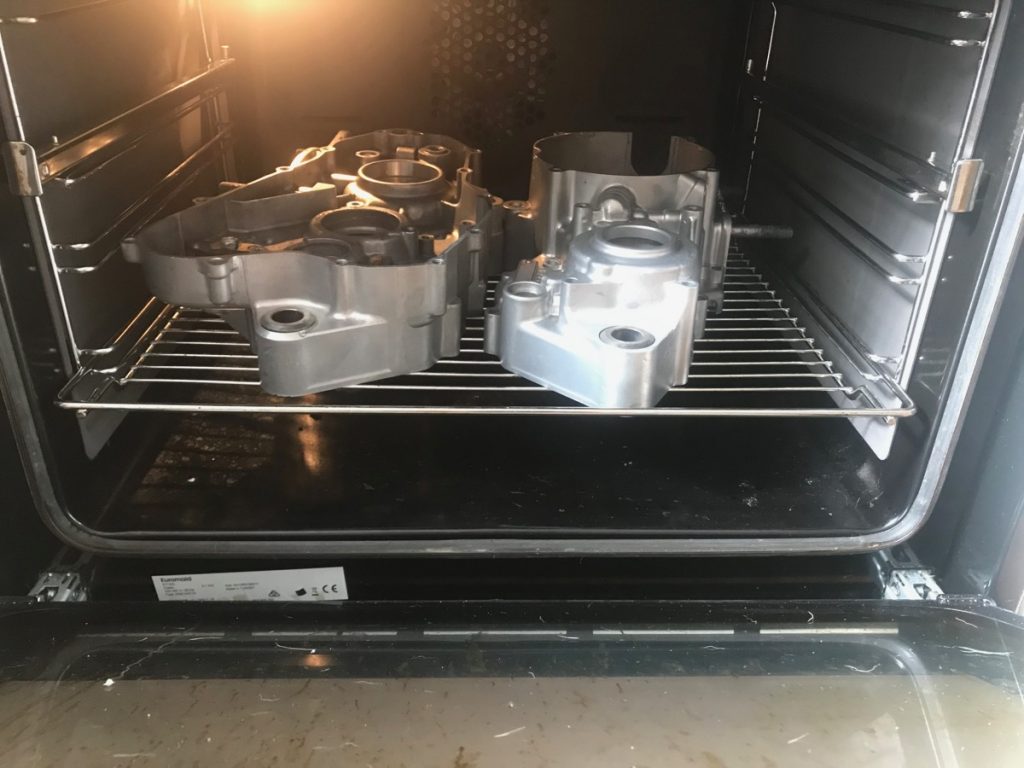 So, with my search for a newer fork underway, my focus shifted to making the bike look less like a junk horse and more like a McGrath replica. I picked up a bunch of parts from Link International, including Motul oils, clutchplates, brake pads, a chain and sprockets and one of their Polisport plastics kits, which come with everything you need to freshen the bike up. Holeshot Graphics whipped up an MC circa-’96 replica sticker kit to finish it off.

I rode the bike for three months once I reassembled it and every time I rode the bike, I was happy to brag that “I haven’t touched the motor at all!” While I intended to do a full rebuild, I just never got around to it and, well, I guess I pushed it too far.

Late last year the CR decided it had had enough. It made some huge crunching noises and came to a heart-crushing halt. I laughed at it while secretly feeling devastated. We stripped it down and discovered that the piston had let go, almost splitting in two and that whatever was missing from the piston had gone down into the crankcase and locked it up solid. I knew I should have rebuilt it at the start. 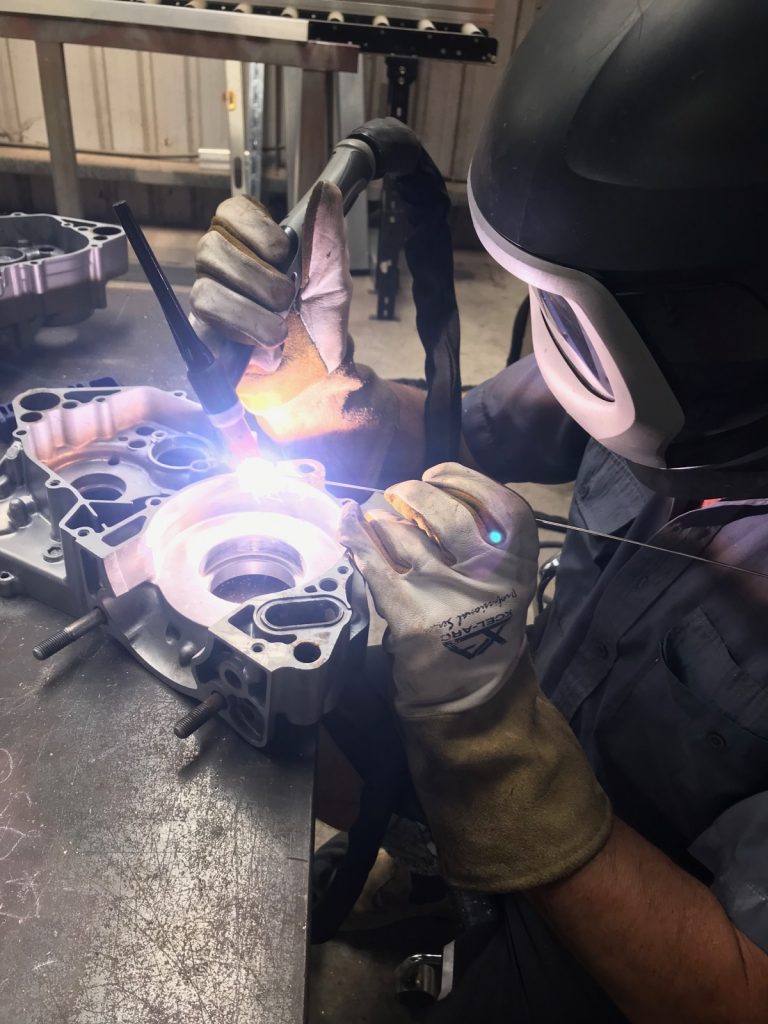 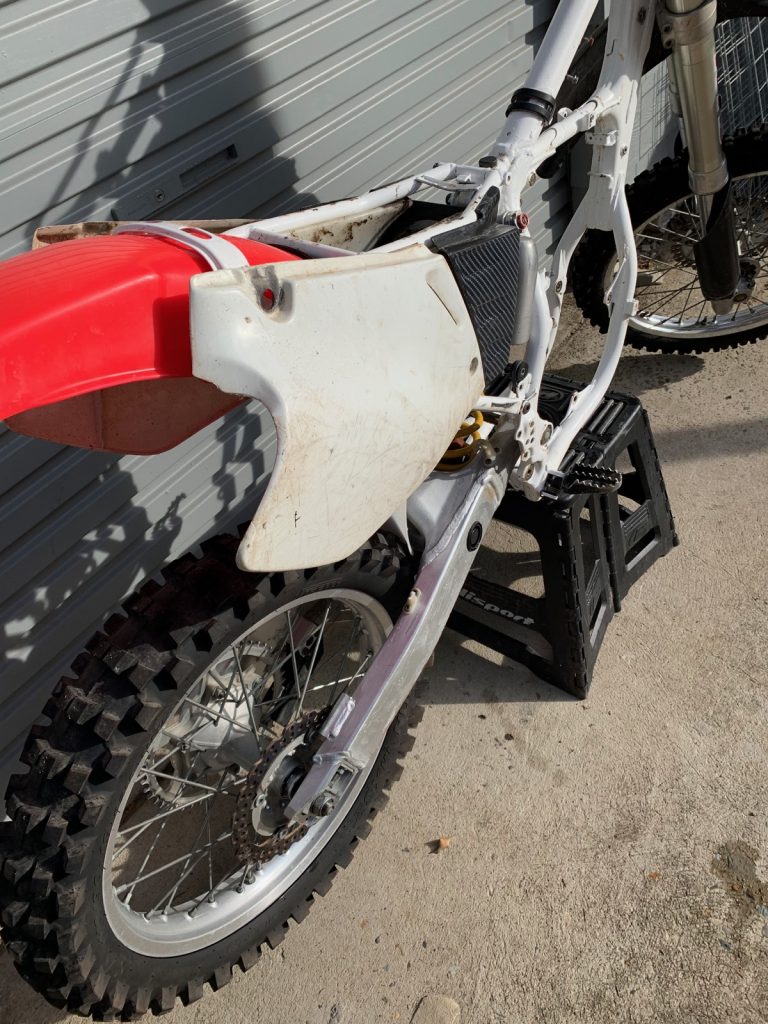 Luckily for me, two-stroke motors are pretty simple and my good mate and former Husaberg race technician Drew Surrest is one of the best mechanics I know. He stripped it down and discovered that the crankshaft seal bearings were toast and that was probably a factor in the motor going boom. He sent the cases to Jess Foreman to get vapour blasted and Jess did an epic job. Drew also got his hands on a genuine Honda crank, removed every old seal and bearing in there and replaced the lot.

I did a bunch of research about cylinder repair work and while there are a few options out there, I decided that I couldn’t go past the guys at Electrosil in Victoria. Paul and his crew were very helpful and efficient and did an awesome job of repairing the damaged cylinder. They also glass-bead blasted the outside of the cylinder and I couldn’t believe how new it looked.

Finally, Drew did a bit of porting and polishing on the cylinder so I had a real rocketship on my hands. He discovered that the old CR cylinder had plenty of room for improvement. 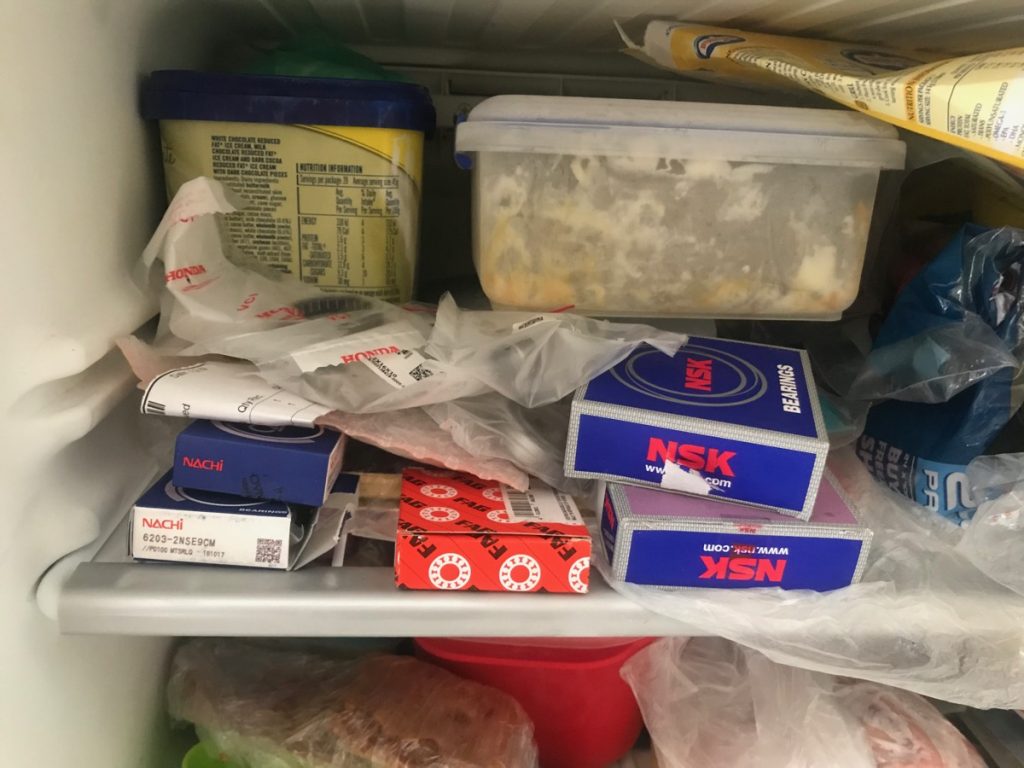 During the rebuild, I discovered quite a few parts that needed to be replaced. The crappy bearings that I bought on eBay were gone as were the chain rollers, headstem bearings, brake lines and footpegs. Rather than go back onto eBay and buy crap, I reached out the guys at MXstore in Queensland.
They overnighted a box of goodies including VForce reeds, a new Renthal 999-bend handlebar, ’grips, ’bar mounts, footpegs, brake lines, Works Connection frame guards and all the bearings I needed.

After months of work and many long nights in the garage, the bike was back together. I fuelled her up, put on a trusty Tech 10 boot and kicked it as hard as I could. First kick, nothing, mind you it wasn’t a very good-quality kick. Second kick I made sure I got it right and the CR fired into life. I gave it a few revs, it was clean, crisp and she was alive again.

I rode it around the street for a good 10-15 minutes annoying my neighbours but I didn’t care. What was a $1600 piece of junk was now a fire-breathing dragon.

What’s the plan now for the CR? Well, firstly, for anyone who was paying attention in the first few paragraphs, yes Ash knows that I am not selling the bike now and, yes, I have paid her back her $500 investment. The plan is to do some racing and get out there and showcase what the bike is all about. There are a few two-stroke specific events around Australia and I’m keen to race them. There are two-stroke classes in the AORC as well as the MX Nats.

I also have a few more upgrades planned. I am working on getting a new twin-chamber Showa fork and triple-clamps from a CRF and the old 24-year-old brake system is a bit tired and lacks some stopping power so I’m looking to get it feeling better too.

I have a factory Brembo front brake left over from my Husaberg team days that I would love to fit on there. I want to run some new wheels as well with an 18-inch rear rim, which would suit enduro riding, and the final piece of the puzzle is to fit a Pro Circuit exhaust system just like MC had back in the day. It won’t be a handcrafted cone pipe but it will be damn close.

Drew Surrest of One4 Moto Mechanics did all my engine work. Drew and I went to school together and he was my AORC race mechanic in 2014 and 2015.

What were the big issues?
The big-end failed prematurely due to a leaking left-hand main seal causing a lean mixture. The failure caused damage to the crankcase, cylinder and piston.
How’d you fix it?
We took the opportunity while the engine was apart to have everything vapour blasted, bringing the cases, cylinder and head back to even better condition than they were in the showroom. We also had to weld and machine the crankcase very carefully to make sure it went back together without having any leaks which could cause all these problems to happen again. The cylinder was taken care of by Electrosil. They repaired and then re-Nikasiled the bore, which is a much better method than to drop a sleeve in the cylinder). Then we fitted a genuine crankshaft, bearings and seals.

Cylinder porting was taken care of as well, focusing on minor changes and really just cleaning imperfections that would impede the air flow.

What about the power valve?
While we were working on the cylinder we took the time to thoroughly clean the power-valve assembly as the last 22 years of carbon build up was not doing us any favours in both reliability and power.

With that back together, cleaned and lubed this refreshed cylinder would really breath new life into this engine. 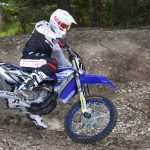 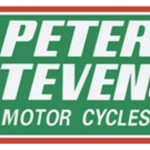 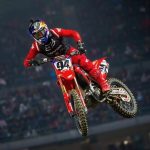 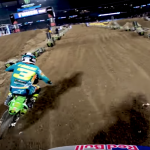 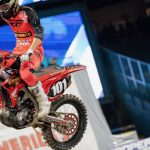