The Ducati Desert Sled is like the labradoodle of bikes, it’s a cross between two very different types of motorcycle: dualsport and café racer.

At first glance, this variation of the amazingly successful Scrambler family looks like a hipster statement with its low seat, flat handlebar and vintage styling.

But get up close and you’ll notice longer travel suspension than the standard model, knobby tyres, defence gear, a modified frame and spoked wheels. Designed in Italy but developed in the deserts of California, the Sled is the perfect blend of retro-cool and dirt savvy.

Sure it’s not going to knock the Multistrada Enduro Pro off its perch as Ducati’s top adventure bike, but the Desert Sled is more than competent in the dirt while keeping the café racer crowd grinning from ear-to-ear.

The concept behind the Desert Sled is nothing new. The term was born in Nevada and Baja California in the ’60s and ’70s. The original desert sleds were essentially stripped down roadies with engine displacements of over 500cc. The owners fitted them with off-road tyres and wheels and, in some cases, even longer travel suspension.

But the desert sleds got their name from the skidplates they ran. Ducati designed this Desert Sled for those who remember. It is the most off-road oriented model in the Scrambler range and derives its personality from the Urban Enduro.

Throw a leg over the Sled and it still feels like a scrambler or café racer. But it has a slightly taller seat (860mm) than what you may be used to, with Ducati offering a 20mm lower one to bring it into more comfortable territory for the vertically challenged. The extra height is a result of the beefed-up frame and longer-travel suspension which now sits at 200mm.

Stick your feet up on the ’pegs and you’ll notice that they are narrow but designed for off-road use. You just need to remove the rubber inserts to feel the teeth of these demons bite the soles of your boots. Thanks to a Twinwall-style handlebar and new rider position, you sit more upright than on the other Scramblers.

Somehow, the standing position is comfortable as well. As the rest of the Scrambler range are not designed for standing, I was expecting a sore back and shoulders but it didn’t happen. In fact, even the tank, which may scratch with kneebraces if you’re not careful, was easy to grip while standing. 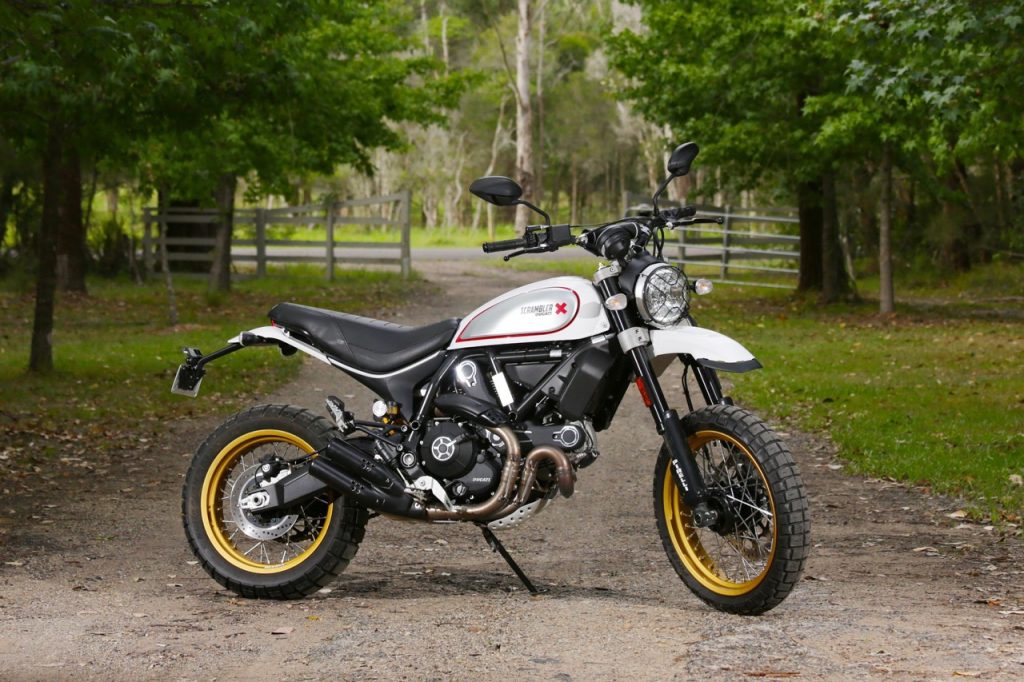 GENE SPLICING
To produce the best for trendies and dirt riders, Ducati had to modify the frame to suit the rigors of off-road work, such as launching off tree roots and erosion mounds. It feels like there is almost no give in the frame compared with an adventure bike or dirt tracker. For the gravel roads this bike was designed for that’s not a bad thing, but just don’t hit the motocross track with it. To improve stability, Ducati also lengthened the swingarm. It made it more durable and added sideplates to protect it. The longer swingarm is great for fire roads, as it more easily soaks up the abuse from corrugations, potholes and rocks and holds a line when wedged on a straight stretch. The longer swingarm has pushed the wheelbase out to 1505mm. To protect the new swingarm, the Sled also gets a new chainguard and sprocket protector fin.

Ducati stuck with Kayaba suspension but, as I mentioned earlier, extended the travel to 200mm. The upside-down 46mm fork was awesome and, for a bike that was designed to dirt-track its way around the bush, performed flawlessly.
The shock however, was a little harsh and didn’t offer much give on small bumps. We also bottomed it out on several occasions.

When smashing into square-edged bumps or sliding down rock-strewn four-wheel-drive tracks the shock didn’t soak up the bumps like an adventure bike. It was just about the only aspect of the machine that still felt road-oriented.

That being said, not many people will take the Sled into the rock gardens that we did (see next page) so the stiff shock will go largely unnoticed by most punters. The comfortable and well-padded seat also eases the pain. 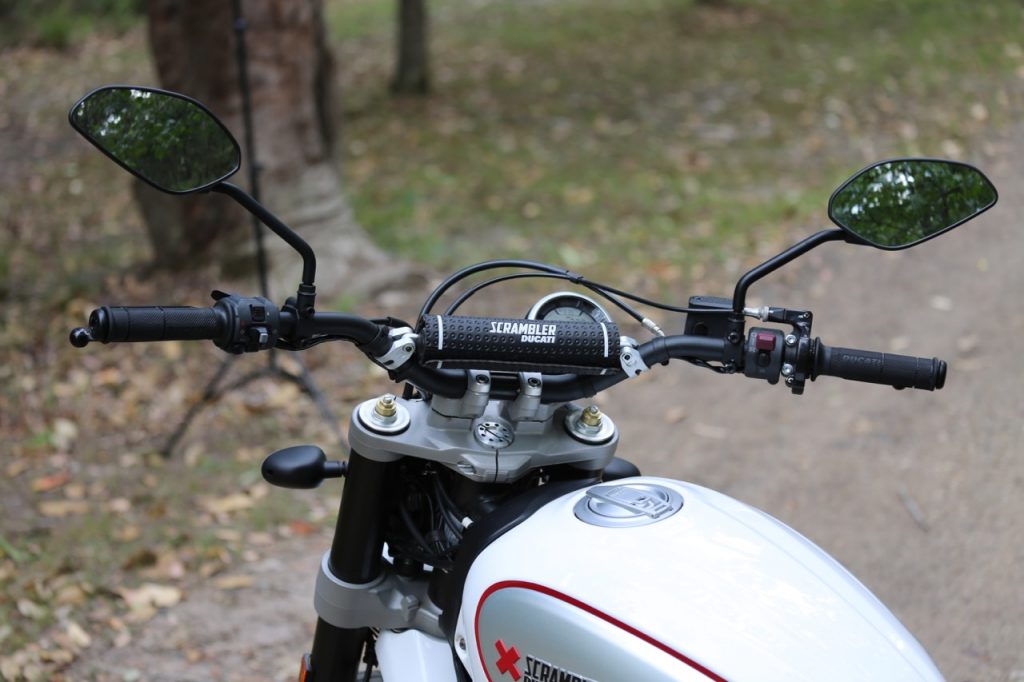 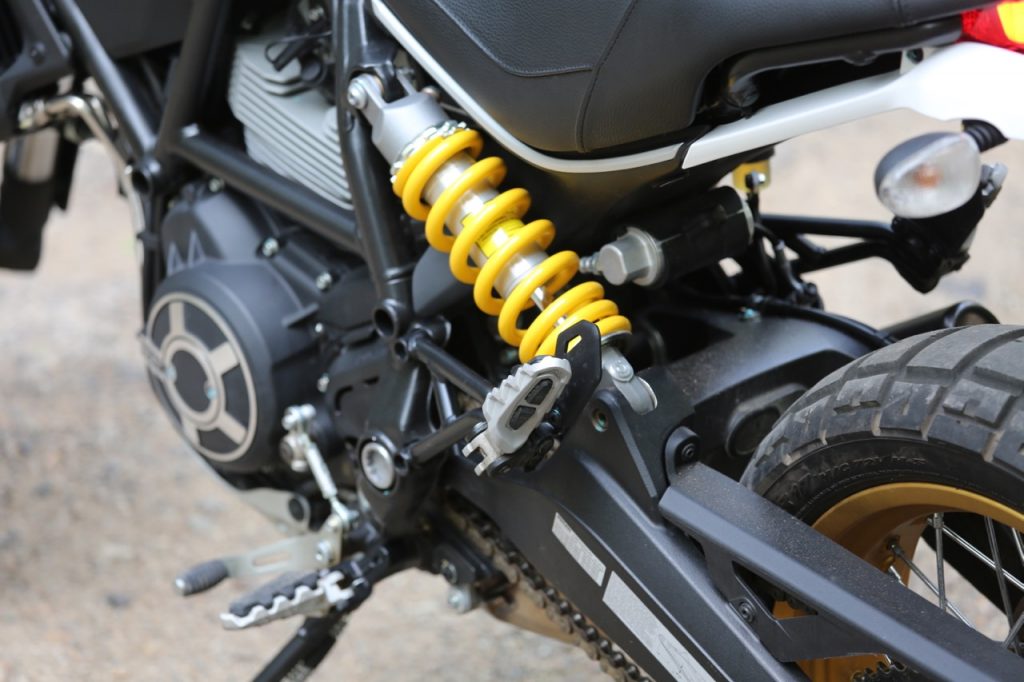 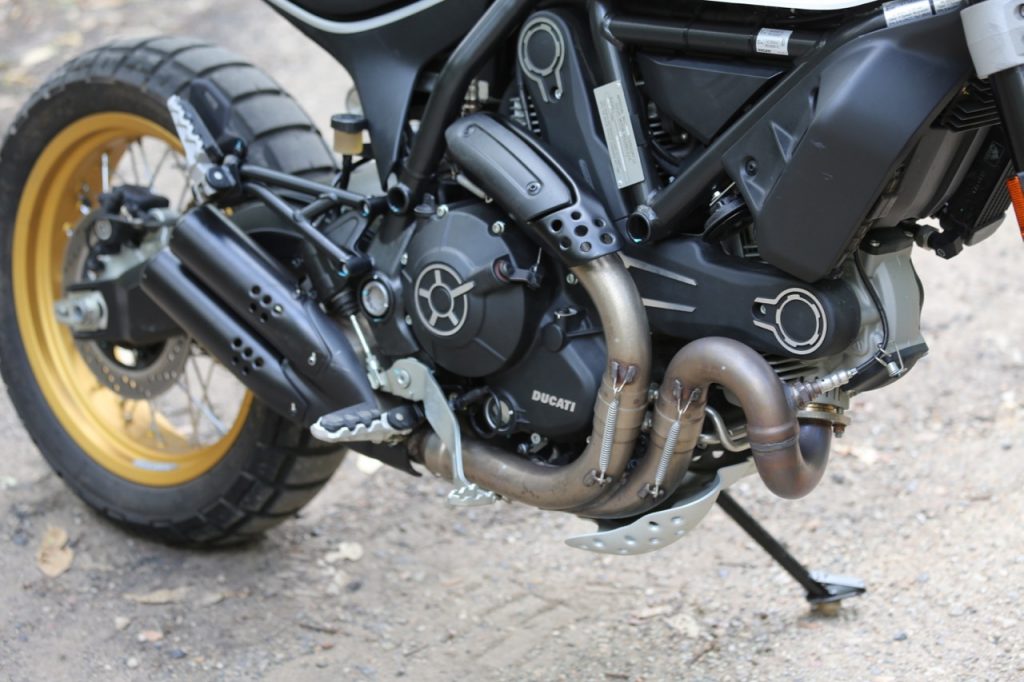 The last of the gene splicing was done with the brakes. Ducati stuck with the Scrambler mix of Brembo brakes with Bosch 9.1 MP ABS but dropped the right front disc seen on the rest of the Scrambler range and bolted a 330mm one on the left. This has paid dividends by dropping the overall weight. At 191kg (dry) it didn’t need twin discs and the single does an excellent job. Rear wheel braking is taken care of by a 245mm disc.

The ABS does get in the way during off-road work. There are no in-between options with the Sled set-up, it’s either on or off. It’s not programmed like the off-road ABS on the Multistrada Enduro Pro and will cut in and out on loose surfaces. If you’re riding on loose gravel or steep, rocky hills, switch the ABS off and rely on the old-skool version of braking (sad that I have to say that now).

HEART TRANSPLANT
The Desert Sled is powered by the same Euro 4-compliant, twin-cylinder 803cc air-cooled engine used across the Scrambler range fitted with a six-speed gearbox. Euro 4 homologation has forced Ducati to develop a new engine calibration but the bonus is that this has done nothing to dampen the power output or lay waste to the bottom-end grunt.

Despite being dragged out of a roadie, this engine feels like a dirtbike one. It is super torquey down low with tons of bottom-end grunt and plenty of mid-range response that reaches 75hp. The gearing was a little long and I often found myself in first or second gear on fireroads but it wasn’t like it ran out up top, it just seemed odd to be in such low gears. Would I change it? Probably not, unless I wanted to venture into more challenging terrain, but that’s what the Multistrada Enduro Pro is for.

The power was incredibly smooth and the temptation to drift through turns was overwhelming. Because of its low centre of gravity, flat seat and linear power curve, the Sled was a dream with the inside leg dragging and the rear-end sliding. Highways? No problem. Twisties? Perfect for a dirtbike punk. Fireroads? Plenty of torque, just get used to using first and second.

DIRTY FINISH
While the important stuff is dirt-oriented, Ducati has not stopped there. The headlight has a grill, the guts have a skidplate, the handlebar has a pad, the frame has extra forward-mounted lights for roo spotting at night, the front guard is high and dirtbike styled, the rear guard is longer, the tank inserts are interchangeable, the exhaust is higher than normal and handguards are optional.

I wouldn’t recommend crossing the Simpson Desert on the Sled, and neither would Ducati. It’s got loads of useable torque in a linear and strong power curve perfect for sliding, a front-end designed to be ridden into bumps and a riding position perfect for dirt tracking. While the shock is a little harsh and the modified frame stiff, I would definitely recommend racing your mate in his all-wheel-drive Evo from pub to pub if you’re only way there is a dirt road. You’ll beat him! 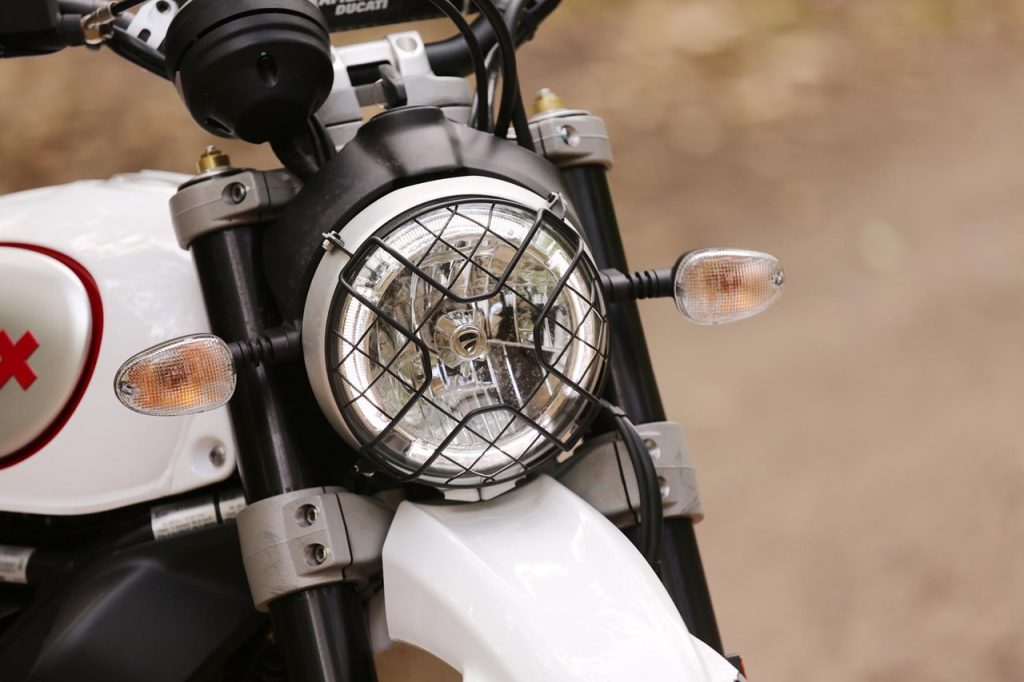 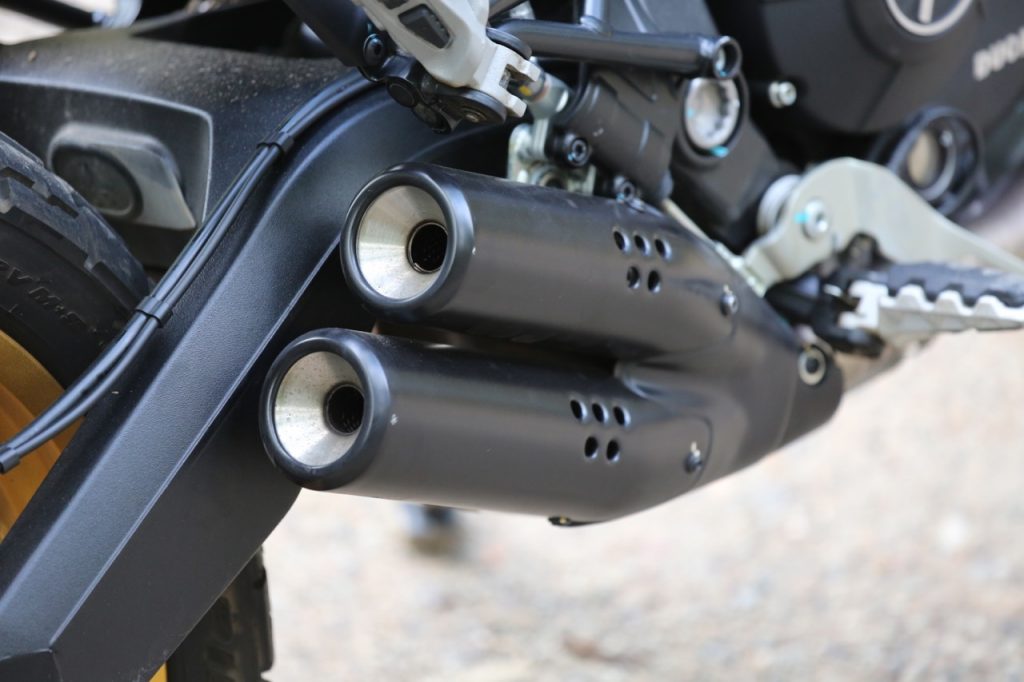 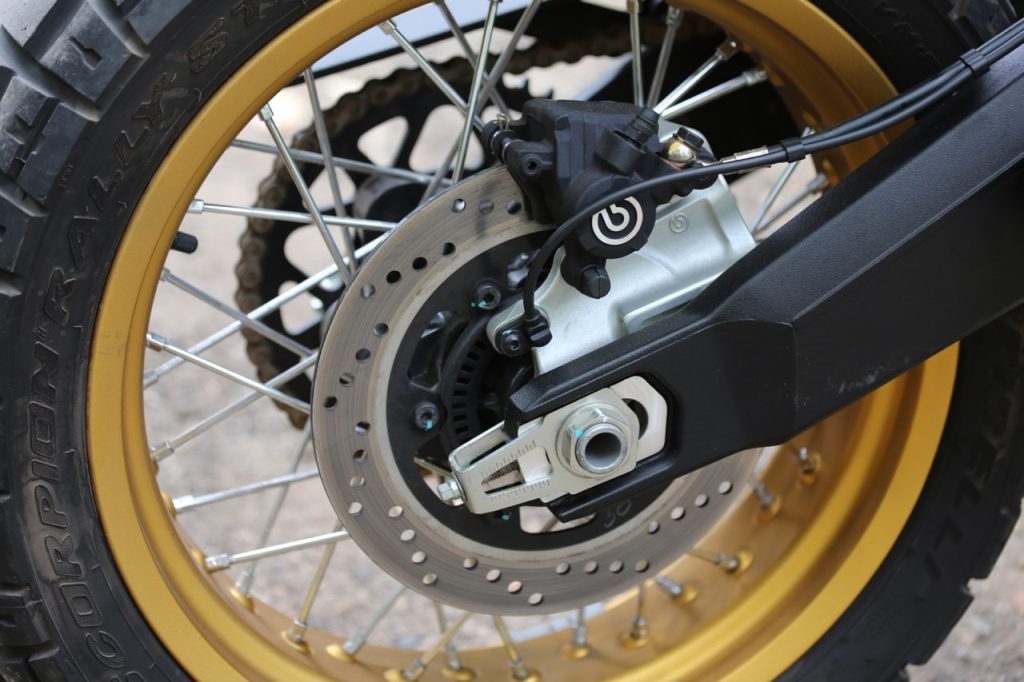