This very tidy 1993 Honda CR125 belongs to ADB reader Steven Hughes and he was kind enough to fill us in on everything he's done to the red rocket.

WHY’D YA BUY IT?
I raced motocross when I was a kid and raced up to the late 90s. It was the best period in motocross, in my opinion. I loved the colours, the style of the bikes, the gear, the riders and two-strokes. It could not have been better. I gave it up because my beautiful daughter was born. I had another daughter and while they’ve both had bikes, they aren’t as interested in bikes as they were when they were young.

I thought I would get back into it again in 2007 and bought a Yamaha YZ250F. I kept that for seven years then bought a 1999 Kawasaki KX250 because I missed the two-stroke sound. I saw a vintage page on Facebook and went to check it out. My brother and I got hooked immediately. He bought a 1984 Kawasaki KX250 and I searched high and low for a KX125. I didn’t find one, but I found the CR125 and I fell in love with it straight away. 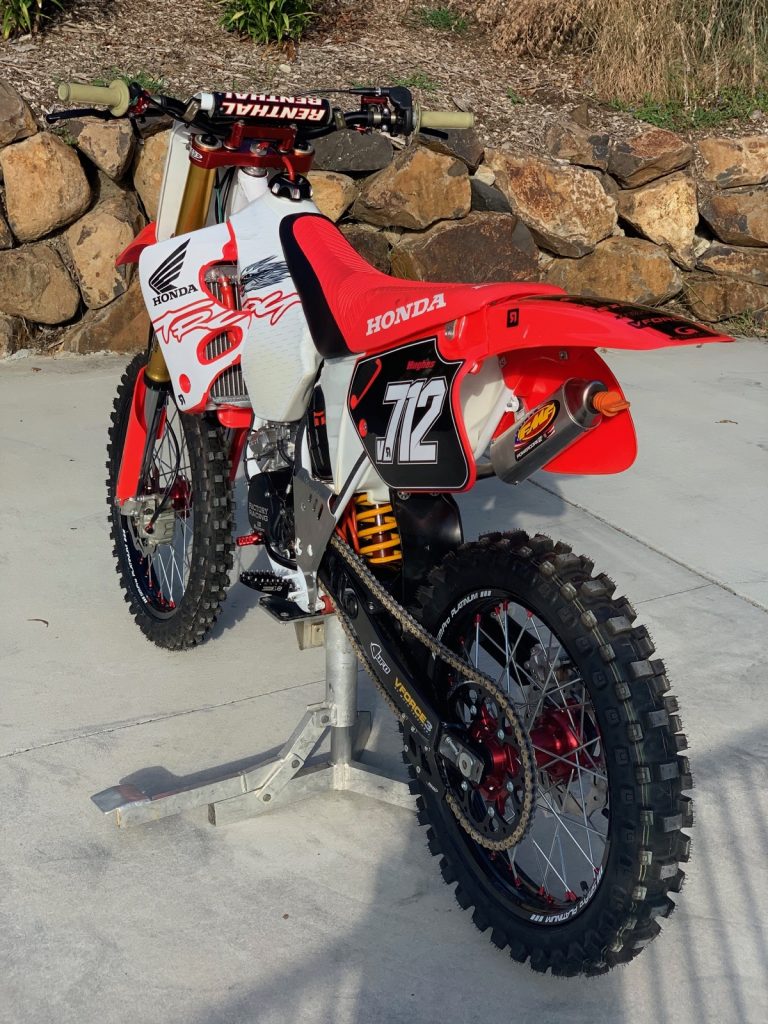 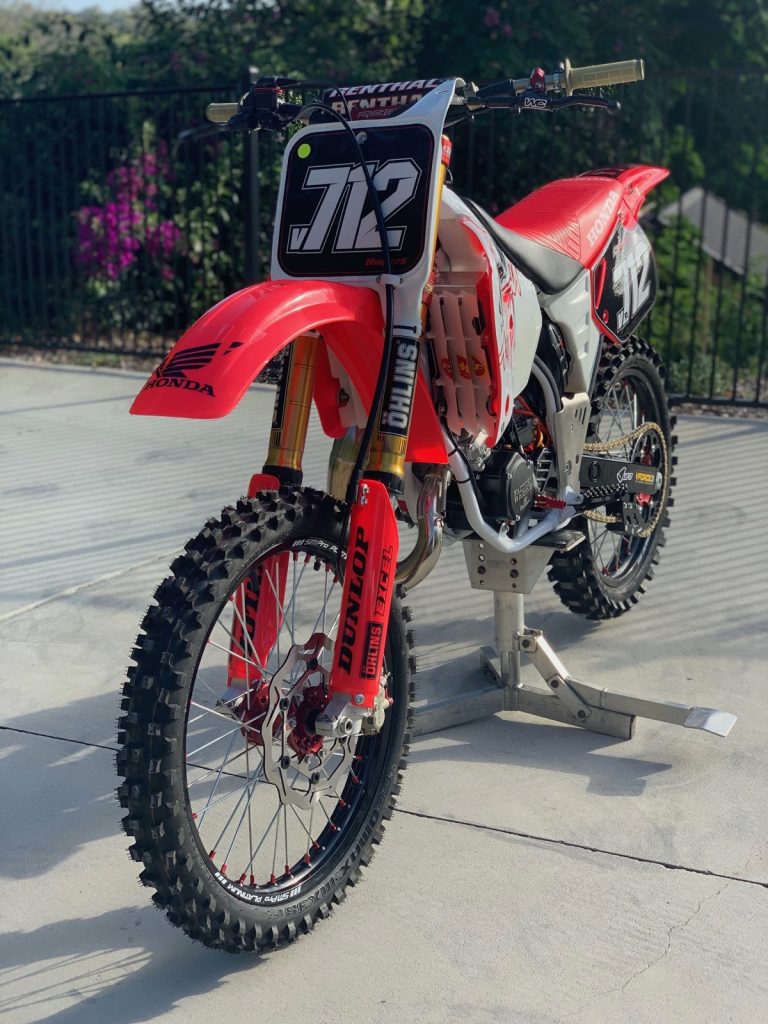 WHAT YA DONE TO IT?
I’ve fully rebuilt the bike from top to bottom. Everything is new or has been replaced. Mark from Pioneer Finishes blasted every bit of alloy and did an awesome job. The bike is still a standard 125 with just a little bit of tidying up of the ports, a genuine Honda crank and Vertex piston from Italy. It runs VForce3 reeds and a full FMF Gold Series exhaust system.

The footpeg mounts were completely flogged out, so I cut and welded some CRF250 mounts on and now I can use wider Torc1 footpegs. The front and rear suspension is Ohlins. The rear is a period-correct shock that I rebuilt but the fork is a factory TM model. I modified the Brembo front brake caliper bracket to provide the correct spacing for the anodised hub and axle. The SM Pro Platinum rims were designed to suit an ‘06 CR125. I run a 270mm front disc and a 240mm rear disc so it stops really well. Both discs are Braking wave rotors which my good friend Pat sourced. The triple-clamps were one of the hardest things to chase down. It is a CRF Factory Pro Circuit clamp. The bike has new UFO plastics and a new Clarke tank. The sticker kit was done by Ride Design. It also has a Renthal Twin Wall handlebar and a Works Connection clutch lever. I also added GPI oversize radiators to keep it cool. 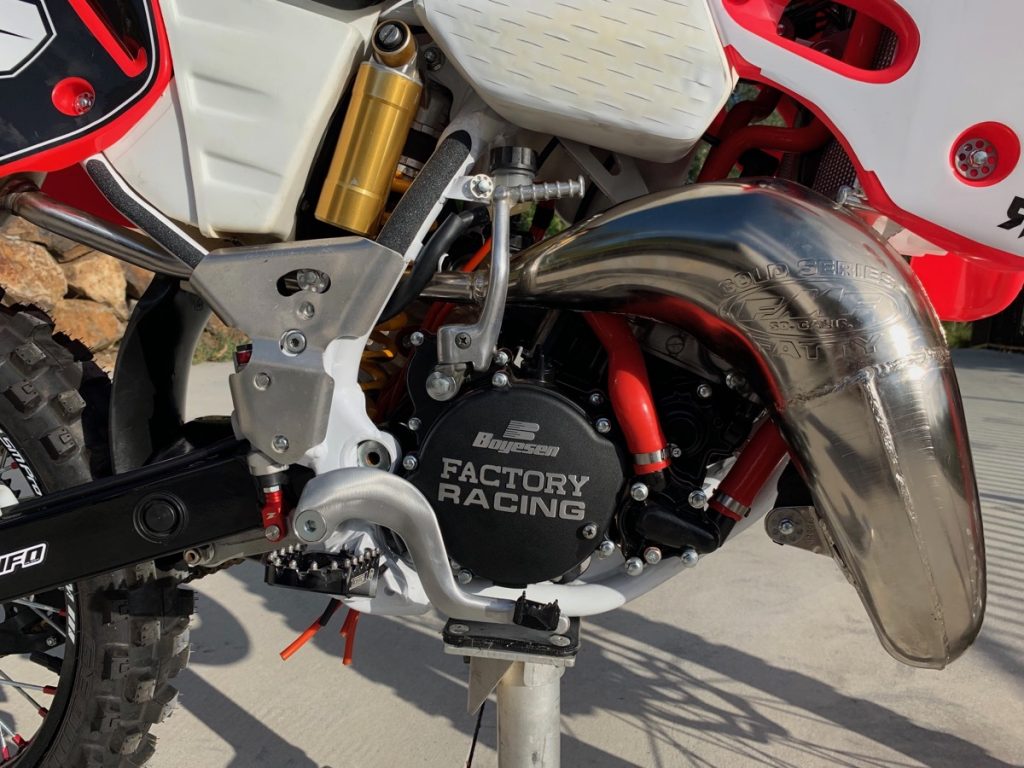 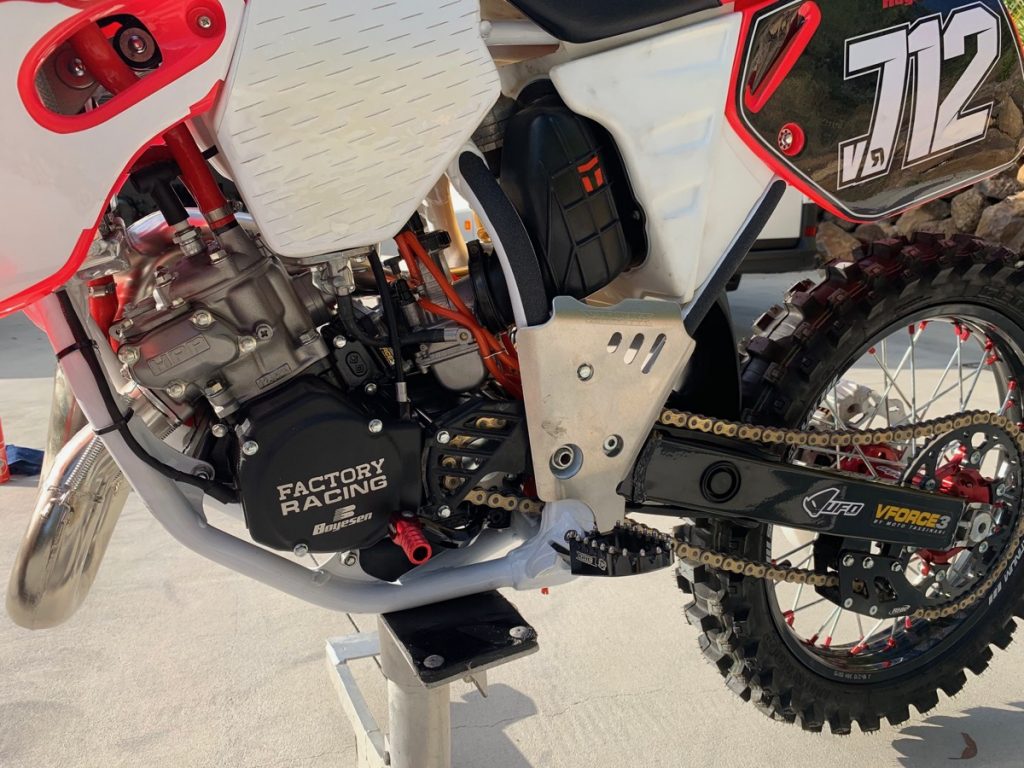 HOW’S IT GO?
The bike goes really well. I can’t fault it. It has awesome brakes and the suspension works really well. It reminds me of when I used to ride two-strokes as a kid and I absolutely love it. I just put a modern twist on it with better brakes and suspension.

RECOMMEND IT?
I would recommend the bike to anyone. It’s just like being a kid again. Getting involved in the VMX community was the best thing I’ve done. I’ve made a lot of new friends and really enjoy riding. There are races all around Queensland and some in New South Wales just about every weekend. We are always busy riding. The only thing you have to look out for is getting addicted. I now have about 12 VMX bikes that I’m currently restoring and riding. 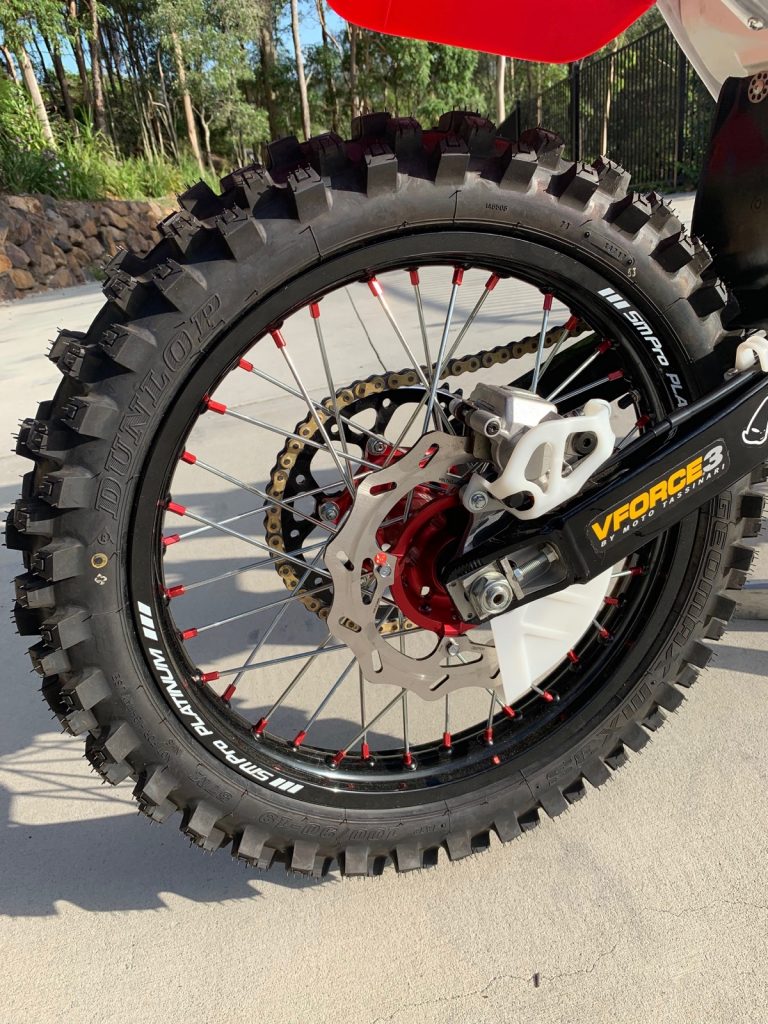 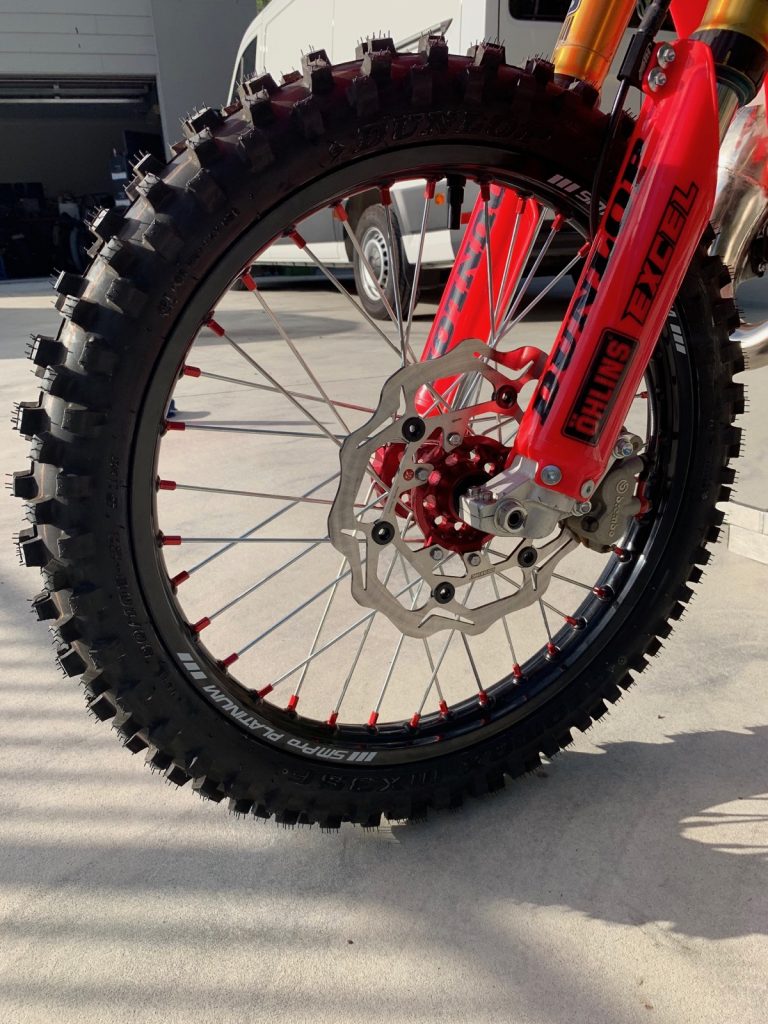 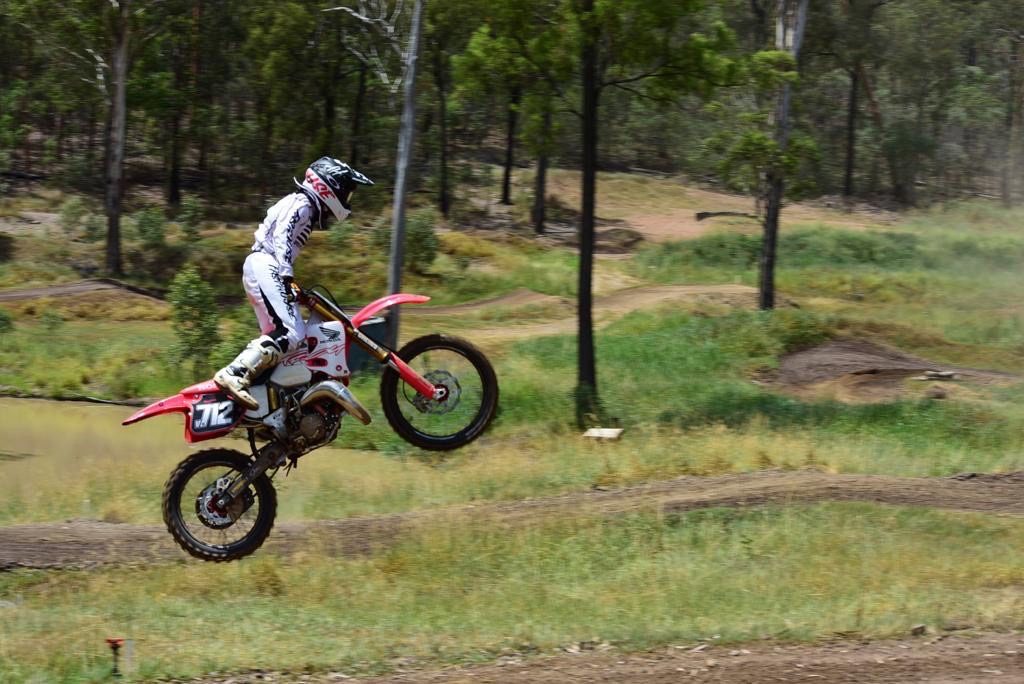 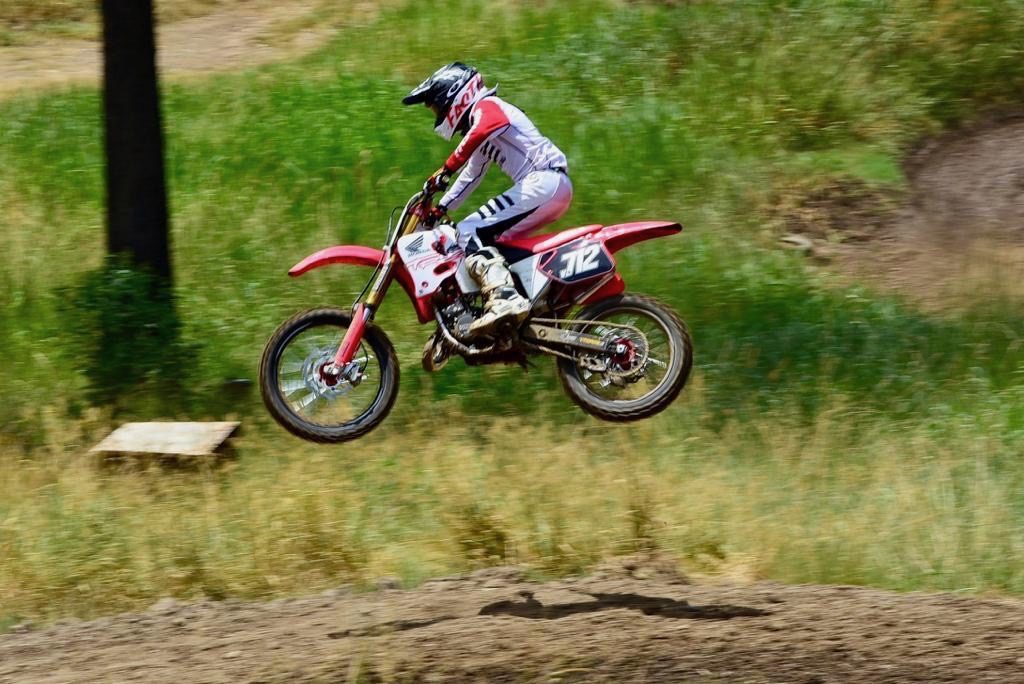 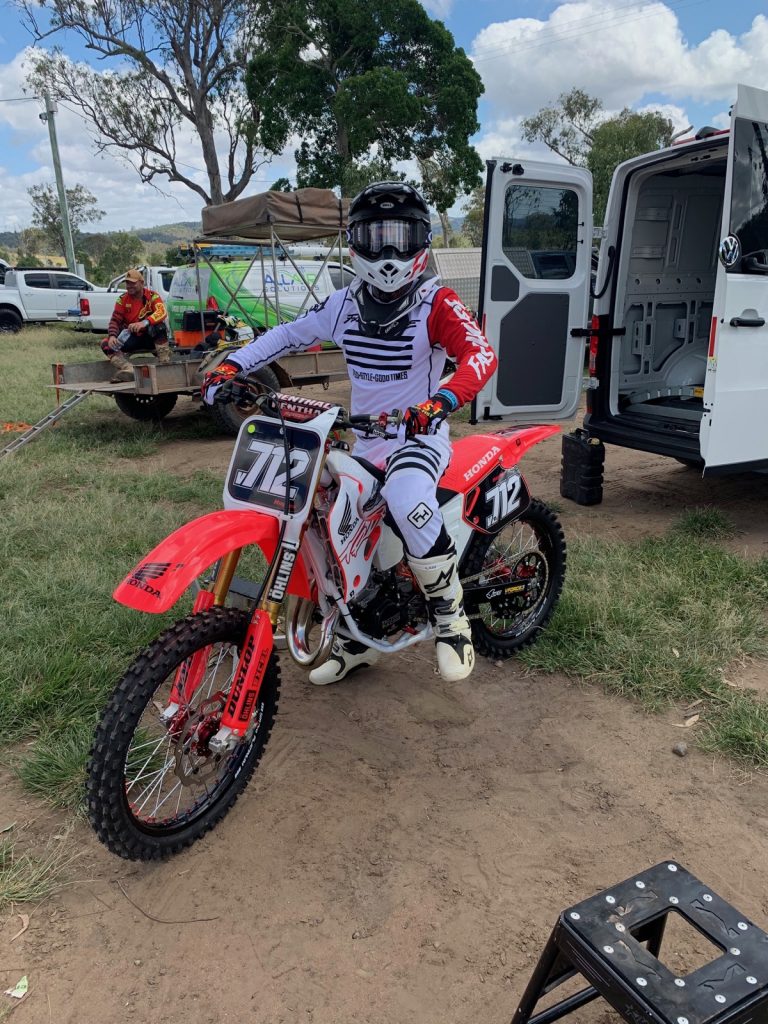